Lucha Libre, or “free fight” to give the Spanish phrase its English meaning, is the name given to the Mexican wrestling phenomenon. Its roots date back to the early 1900s when Mexico was in the throes of a revolutionary war against the infamous dictator, Porfirio Díaz.

As is often the case in times of war, the public craved diversions that distracted them from the reality of what was going on around them. Giovanni Reselevich y Antonio Fournier (two Italian entrepreneurs) seized the opportunity to promote a form of fighting whereby two opponents fought each other hand to hand without either protection or weapons of any kind.

It was an extremely aggressive and violent sport with little or nothing in the way of rules or regulations. These fights became known as “Lucha Libre,” and the fighters were dubbed ”Luchadores.” From its beginnings in local town rivalry, Lucha Libre soon began to develop an immense following, first throughout Mexico as a whole, and more recently across the world.

What makes Lucha Libre so popular

There are two aspects of Lucha Libre that set it apart from other types of popular wrestling. First, there are the masks that the Luchadores wear. These were first popularised by arguably the best Luchadore of all time – El Enmascarado de Plata, or “Saint, the Silver Masked Man.”

The other trademark that sets Lucha Libre apart from other forms of pro wrestling is the technical and acrobatic aerial skills that fighters display, particularly in the lighter weight (peso-semicompleto) divisions.

Lucha mania is now globally rampant and, the recently launched Lucha Maniacs Slot Machine is leading the charge. There are a many Lucha Libre games you can play right now, and here are snippets of just a few.

The original Guacamelee (one of the so-called Metroidvania video games developed and published by Drinkwater Studios) was first released in April 2013 for PlayStation 4, PlayStation Vita, and Xbox 360. With its special brand of Lucha machismo, players pick up the role of Mexican farmer, Juan.

Together with his magical Luchadore mask, his mission is to rescue the daughter of the president who is the prisoner of a skeletal demon. The action takes place between the world of light and the world of dark, with the role player being able to switch between worlds.

For many devotees of pro wrestling video games, it remains one of the best ever made, and fans will be undoubtedly thrilled about the release of its sequel, Guacamelee 2. The action takes place seven years after Juan Aguacate’s original battle.

With an upgraded graphics engine and full of fabulous fresh fighting moves, this game tracks our now married farmer’s quest to defeat an evil menace that is out, not only to obliterate Mexico from the map, but time and space too.

With his powerful blue chicken buddy, Juan will take you with him through a world of dangers and fantastic new characters in this stunningly excellent follow-up to the original.

Gaming house Yggdrasil came up with the great idea of combining people’s passion for playing slots, with the thrills and spills of the Lucha Libre pro-wrestling scene and they designed the Lucha Maniacs slot. It’s a 5-reel, 20 pay-line slot that you can play on all devices for just 20p.

This game comes complete with a free spin mode enabling players to start off with as many as 30 free spins. It incorporates random wilds, sticky wilds, stacked and wild wrestlers, and 3 x multipliers on Luchadores whereby you can accumulate more free spins, and shoot for its golden bet feature for larger wins.

Between 2002 and 2005, American TV responded to the interest in Lucha Libre and at kiddy level by screening a cartoon series called Mucha Lucha. It was so popular that it was brought to the gaming industry in a video game for Gameboy Advance devices.

This is no doubt where many of today’s Lucha Libre fans first cut their teeth. At the time the game didn’t get the best of reviews, but lots of current LL game players may carry the guilty secret of their awakening to this particular brand of pro-wrestling.

The daddy of them all – Lucha Libre – Heroes del ring

It uses real Mexican wrestlers as well as customisable Luchadores. Such was its success in Mexico that is was redeveloped by Sabarasa in Wii. It may seem a little outdated now, but it sparked off the Lucha Libre revolution and is still well worth a play.

Whether you are a devotee of the Lucha maniacs slot game or an avid fan of the Lucha Libre Britannia scene, there can be little doubt that this form of pro-wrestling is here to stay. 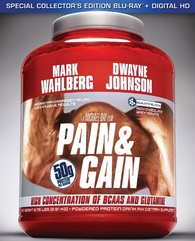 I am feeling a little bit of deja vu here, I just reviewing “Pain & Gain” on Blu-ray only a few weeks ago. I was pretty taken back that it was completely bare-bones in terms of special features. So I think Paramount realized they made a mistake and are issuing this Special Collector’s Edition for the holiday season. The only draw for this release is that it includes about an hour of special features and a new (weaker) cover and also leaving out the DVD copy, otherwise it is same release.  Unless you are a die-hard Michael Bay fan and really need these bonus features, I would recommend a pass on this release.

If you want slightly more technical review, here is our review for the film and it’s original bare bones Blu-ray, which was released on August 27, 2013. I am honestly not a fan of double-dipping and the first release was really just a way for them to rush the film out onto Blu-ray fast. Since the draw for this release is the extras, so let’s get cracking on them, as are all bundled under “The A Game: Michael Bay’s Pain & Gain”. This consists of eight featurettes are can be viewed as a big one-hour documentary. The extra looks pretty in-depth behind-the-scenes on the production and also touches on true crime events as well. Since this is labeled as a “Special Collector’s Edition”, I would have wanted a bit more than just an hour of extras and there are still no commentary tracks included.

Here is a break down on the eight featurettes included. “Still a True Story: Ripped from the Headlines” looks into the real crime and being turned into a movie with reporter Pete Collins and the real Ed DuBois. “Back to Basics: Michael Bay’s Vision” is a love fest for Bay with himself and the cast talking about the film. “American Dreamer: Daniel Lugo” features Mark Wahlberg talking about his role. “Passion Player: Paul Doyle” is the same thing for Dwayne Johnson’s character. “Dirty Work: Adrian Doorbal” again does the same thing for Anthony Mackie’s role. “Victimless Crime: Victor Kershaw” looks into Tony Shalhoub’s character as well. “Diamonds in the Rough: Locations” talks about shooting locations in Miami. Lastly “The Real Deal: Law Enforcement” talks about the use of real police officers. 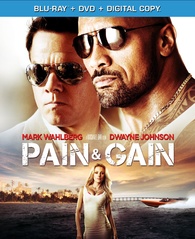 This is definitely the year of Mark Wahlberg and Dwayne Johnson.  Mark Wahlberg is hot off his hit comedy “Ted” and just scored on “2 Guns” with Denzel Washington. Dwayne Johnson has put thrown into every franchise in Hollywood and come out swinging. The combo of the two together really work well for this film. It is not what you would expect from Michael Bay but it is definitely a fun ride. In fact, it is quite dark and violent which I was not expecting. Packed with a fast pace, this film definitely draws you in and besides the leads it packs an awesome supporting cast. I would recommend this as a renter for sure. Come on you know you will watch anything with The Rock in it just like me!

“Pain and Gain” is based on a true story about a group of personal trainers in 1990’s Miami who are sick of being poor and set out in pursuit of the American Dream. When they decide to mess steel from businessman (Shalhoub). They get complicated and they get caught up in much more than they expected. The film is adapted for the screen by writers Christopher Markus and Stephen McFeely from articles written by journalist Pete Collins. The film also Ed Harris (A History of Violence), Rob Corddry (Hot Tub Time Machine), Rebel Wilson (Bridesmaids), Ken Jeong (The Hangover) and Bar Paly (The Ruins).

I think this movie didn’t succeed since when people think about Michael Bay, they just think about big movie with tons of explosions. That is not the case here at all. This quite a small film yet I appreciate Bay for trying something different. Paramount delivered this release in a combo back with Blu-ray + DVD + Digital Copy. As would be expected with a Bay film despite its size, the film look stunning with its 1080p high definition and sounds amazing with its completely amped Dolby TrueHD 7.1 track! But the fun stops there since this Blu-ray comes ABSOLUTELY bare bones in terms of special features. That is a real shock to be honest and disappointing.