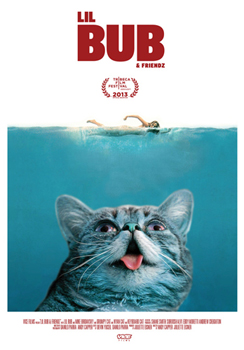 Lil Bub, the internet cat star owned by Indiana musician Mike Bridavsky received a red carpet welcome on Thursday night  as  the documentary she stars in, Lil Bub and Friendz, made its debut at the Tribeca Film Festival. While last year’s fest featured a feline-centric short titled “CatCam,” Lil Bub is a feature-length doc, dubbed by co-director Juliette Eisner as “the most epic cat video in the entire world”.  It also features Bub’s peers, Grumpy Cat and the man behind animated viral phenomenon, Nyan Cat. Eisner and co-director Andy Capper discussed the appeal of cat videos at the premiere.

So why are people so obsessed with cats?

Eisner: I mean that’s a good question. We try to kind of answer that in the film but I think it has to do with the unscripted nature of the cat video. People don’t really see cats doing strange things often because they’re not as you know, out there as a dog per se.

Capper: Dogs are just out there…cats you have to live at someone’s house for like five years til you have access.

Eisner: People just keep cat videos open at their desktop while they work every single day and it just makes them feel fuzzy inside. Fuzzy and warm. So this is an hour-long fuzzy and warm film.

Bub owner, Bridavsky carried Bub down the carpet as her signature physical appearance—Bub lacks any teeth, has a constant overbite due to a shortened lower jaw, extra toes and a bone condition in her legs—also causes difficulty walking.

How’s Bub handling the red carpet and all of this attention?

Her health is okay?

It is, she has a bone condition that makes it hard for her to walk. Sometimes her bones get inflamed and she is in some pain but I have a very good vet and specialists who take care of her.

How’d you choose the name Bub?

Bridavsky: I actually just, the first time I met her, I just picked her up [holds Bub aloft] and just went ‘Hey Bub!’ And that was it.

So not a Wolverine reference?

Bridavsky: It’s not but we’ve done stuff with Wolverine since because of it.

Bridavsky: It has not changed her.

Bridavsky: I have a famous cat now!

As for whether or not the filmmakers are all ‘cat people’, Bridavsky has four other cats who reside in his studio, Eisner revealed in the post-screening Q&A that she had cats dubbed Brother and Sister growing up while Capper was missing his feline friend who was back home in London.

Lil Bub and Friendz will be screened tonight (4/20) as part of the free Tribeca Drive-In series with additional public screenings on Tuesday and Thursday. Information regarding tickets can be found on the Tribeca Film Guide.

Meanwhile, you can check out Bub’s official Youtube channel at youtube.com/lilbubbub