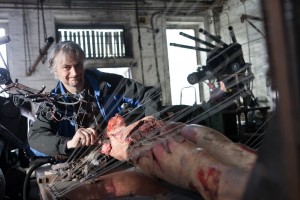 Richard Raaphorst is the director for the crazy new film “Frankenstein’s Army”, which is also his directorial debut. The film takes place during WWII and we find out that a member of the Frankenstein bloodline is turning dead soldiers in zombots, half-human/half-creatures. The film uses all practical effects and is a must for horror fans. Media Mikes had a chance to chat with Richard about the film and about working in the horror genre.

Mike Gencarelli: Tell us about the origin story behind “Frankenstein’s Army”?
Richard Raaphorst: I had several different ideas that inspired me swirling around in my head, like stories about Russian armies and scenes about biomechanical drones. I had just bought an illustrated version of Mary Shelley’s ‘Frankenstein accompanied with gorgeous pictures by Berni Wrighton. I was driving in my car listening to movie soundtracks and realized that I could mix all those elements together. When that happened, I felt like I was struck by lighting and the concept was born. Inspiration took over and turned into passion and I couldn’t escape from it until my ideas were realized.

MG: What do you enjoy most about working in the horror genre?
RR: I like the idea of escaping from the ‘conventional’ worlds and going complete out of the box. There are no limits in horror, so I can be extremely inventive. I create totally unique and weird visuals, scenes or characters that would never fit in a romantic comedy or straight action movie. It allows me to bring visual concepts to life that I have developed since my childhood.

MG: “Frankenstein’s Army” is your first feature film directing, what was your biggest challenging?
RR: I wanted to make the movie as authentic as possible so that can make viewers very scared and vulnerable. My biggest challenge was to holding on tightly to my vision. At a certain point, I realized that everything

happening on set was a direct result of my plan, and is therefore, my responsibility. However, a lot of people involved in projects like this have other ideas and sometimes try to influence the director’s decisions, especially when the director is trying to do something new or original. They will say things like, “Why don’t you do it like that other movie?” or “That doesn’t work because I’ve never seen it like that before.” Then, you have to keep faith in your original idea and become stronger in your resolve, but understand how to navigate around these people. The good thing is that the people who DO believe in what you’re doing will be your strongest allies.

MG: How these the idea of flesh-and-metal “zombots” come about?
RR: I always had a deep fascination with industrial stuff. My father worked at a nuclear power station and as a mechanic in the petrol chemical industry for a while. He once took me to work with him in Saudi Arabia and showed me the machine room of a HUUUUUUGGGGGEEE oil tanker. I was blown away by its gigantic proportions and by the industrial beauty. It was the same feeling that other people would have in a beautiful Medieval cathedral. I wanted to create creatures that would inhabit such an environment. I started experimenting with dressing myself up as industrial monster. I named them Transers at the time. I dug up some very old pictures of this for this interview. The quality of the pictures isn’t good because I developed them myself, but it’s possible to see some elements of the zombot designs. In retrospect, I can say that the seeds for the zombots were already growing in my head when I was a teenager.

MG: Tell us about the practical effects in the film and why you chose that route?
RR: It is not that I’m against the use of CGI, but I do have something against to misuse it. In Frankenstein’s Army, I wanted to stay as authentic as possible to that time period. We only used CGI to add some sparks and flashes here and there, but anything more and the atmosphere would not feel realistic anymore. It would feel like a cheat. With CGI everything is possible, but it often looks too perfect, and with that, you lose charisma. In my opinion, CGI lacks charisma, so I use it as a kind of “background music.” WW2 CGI monsters would be a real nightmare to watch and would have destroy all the fun.

MG:  What is the status right now with “Paris I’ll Kill You”? Is that going to be next for you?
RR: I changed the title into FEAR PARIS because it doesn’t relate to Paris, I Love You. It’s a world all its own and needs a unique title. We are now doing a online campaign to complete the budget and get ready to shoot (fearparis.com). So far, I spent a year designing the whole city, including all kinds of weird and strange character and monsters. This new apocalyptic Paris is a fantastic joy to create. I love it. 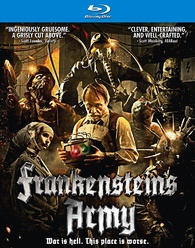 Flesh-and-metal “Zombots”. Period. That is really all you need to know about “Frankenstein’s Army”, which should be enough to sell you. If that isn’t enough this film contains all  practical creature effects. Now take a look at the Blu-ray cover or the film’s poster and know that there are some crazy cool creatures created for this film. I am a super big fan of practical effects, which is not common in the age of digital but it really adds a lot of character to the film. I should also mention that the team that worked on this film also did the make-up effects on a few little known films in “The Lord of the Rings” and “The Hobbit” franchise. Karel Roden (“Hellboy”) stars as Frankenstein and delivers a creepy yet powerful performance. If all that isn’t cool enough this was even filmed at abandoned World War II sites in Prague and throughout Europe. The first 20 minutes are slow but once it gets rocking…watch out!!! A must see for any fans of original and unique horror.

Official Premise: In the dying days of World War II, a battalion of Russian soldiers find themselves lost in enemy territory. Stumbling upon a village decimated by an unseen terror, they re lured into the secret lab of a deranged scientist (Hellboy’s Karel Roden) and forced to face off against his army of horrific flesh-and-metal war machines. Leaderless and faced with dissention amongst their dwindling ranks, the Russians must find the courage to face down this terrifying new menace or die trying. A nightmarish fantasy thrill ride unlike any other, Richard Raaphorst’s “Frankenstein’s Army” is a delirious plunge into the darkest depths of insanity.

The Blu-ray release from Dark Sky Films really looks awesome with its 1080p transfer.  The film has a handheld feel but captures the gritty feel to this crazy film. The creatures effects also look amazing under this.  There is a DTS-HD Master Audio 5.1 track, which really delivers with the war action and creepy score. The special features are not out of this world but worth checking out. The main sell is a very in-depth “Making-Of” featurette, which clocks in just over 30 minutes. Everything is covered in this film from pre-production and onwards. It is a must watch There are five (very short) creature spots for each of these baddies including “Burnt Match Man”, “Mosquito Man”, “Propellerhead”, “Teddy Bear Woman” and “Razor Teeth”. I would have loved to seen more in depth on these creatures, even though we do cover that some in the featurette. Lastly there is a trailer gallery.