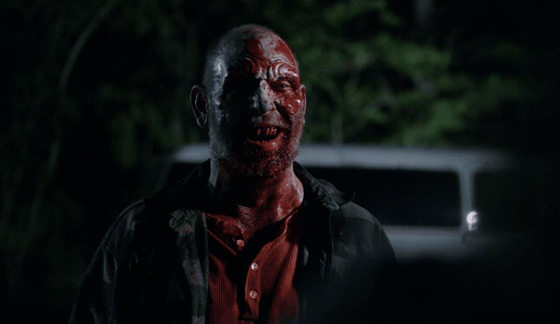 Punk rock and horror just work. Both are angry, fast, short, simple and to the point. From “Surf Nazis Must Die” to “Return of the Living Dead,” there’s a lot of great elements at play anytime you get punk rockers and horror tropes mixed up. Contemporarily speaking, there isn’t much left in the proverbial tank, outside of “Green Room,” a film that I was in the minority on. But “Uncle Peckerhead” could serve as a potential rejuvenation for blast beat punk rock soundtracks laid over a gory mess.

When we meet the band Duh, made up of Judy (Siegel), Mel (McCollister) and Max (Riddle), they’re down on their luck. The trio’s touring van is repossessed, coming immediately after Judy secures several shows on a statewide tour. In a desperation move, the band begins plastering signs everywhere, hoping someone will let them rent a van for their tour. That’s when they meet Peck (David H. Littleton). Peck agrees to the van deal, but he has some stipulations. He gets to drive and be the band’s roadie. Out of options, the band agrees, even though something isn’t quite right with Peck. It’s only after their first gig on tour that they learn Peck is a flesh eating monster, with pale skin and yellow teeth, for about a dozen minutes when the clock strikes midnight.

The monster that Peck becomes isn’t scary, nor is it supposed to be. If the opening moments aren’t a clue, “Uncle Peckerhead” is a comedy-horror. My favorite kind of genre because it’s an excuse for gore and sometimes childish comedy. I mentioned “Surf Nazis Must Die” earlier because the film has a quaint Troma charm to it. If you had told me “Uncle Peckerhead” was a Troma film, I wouldn’t be surprised because it’s in the film’s DNA. Everything is cheap, but the cast dives so far into that content, that their line delivery is admirable, no matter how bad the dialogue is. The comedic timing is hit and miss, but when it hits, it’s nearly pitch perfect. So if uncomfortable situational humor and gore don’t tickle your funny bone, you should probably just avoid horror, and Troma films, altogether.

The main conflict that develops throughout this off-the-beaten path road trip film is between Judy and Peck. While Judy has her eyes set on becoming successful (which in the punk world, isn’t that successful), she has one eye on Peck. While her bandmates seem content with Peck’s blood lust, especially after he devours some metalhead bullies, Judy is understandably concerned that a trashy older man devours human flesh at night. Over time though, she begins to admire Peck because of the way he supports the band and its members. You could call him a hillbilly with a heart of gold.

I probably enjoyed “Uncle Peckerhead” more than most low-budget horror because it recognizes what it is, and doesn’t try to be different. Surprisingly by the film’s end, “Uncle Peckerhead” made me feel nostalgic. Watching a bad punk band play to a couple dozen fans looking to mosh made me miss concerts in new COVID-19 world. Campy films like “Uncle Peckerhead” are best viewed with a crowd. Unfortunately I missed this film at Panic Fest, where it premiered, so it also made me miss the cinematic experience that films offer in a crowded, dark room with strangers. I especially admire these kinds of low-budget horror gore films because the passion at work on screen spills over into the crowd, and suddenly the screening becomes a party. “Uncle Peckerhead” should satisfy the sweet tooth of passionate horror fans and give them something to bob their head to.