After reading the first issue of “Figment” from the Marvel line of Disney Kingdoms, I couldn’t wait to start reading the second issue. If you are familiar with name of the ride in Disney World’s Epcot, “Journey Into Imagination”, then you will appreciate this issue because it follows the Blarion Mercurial and Figment into the imagination world. In the end of the last issue, they were both being sucked into a portal and this one starts off with them ending up in a strange world with many different creatures including the extremely cute Chimera.

This world of imagination looks so amazing and I couldn’t help but race to the next page. Kudos need to go to acclaimed creators Jim Zub (Skullkickers) and Filipe Andrade (Captain Marvel) for really creating this wonderful new world for these classic characters. When I first read that they were making a comic book series about Figment and angling it as a steampunk fantasy, I didn’t know what to expect but this has been quite the ride so far. I felt like I wanted a little more out of this second issue but it still continued to setup the pace well for future issues. Only three more to go in this series, I wish it doesn’t have to end so soon. 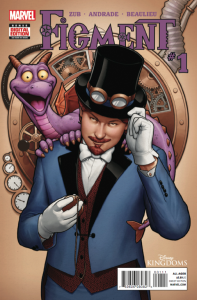 When I was a kid visiting Walt Disney World’s Epcot, I would run as fast as I could to “Journey into Imagination” starring the lovable purple dragon Figment. The character has also inspired me and hopefully many others to use and embrace their own imaginations. Since Marvel and Disney joined forces the superhero movies that we all know and love weren’t the only great thing to come out of the merger. The Disney Kingdoms line comics that Marvel is putting out is really expanding the world such great characters and Disney properties.

“Figment” is actually the second title in the new Disney Kingdoms line following the equally amazing “Seekers of the Weird”, which is based off an idea that Walt Disney had that never came to be about a collection of “unique” items that were protected by a family. A few months ago when I heard about “Figment”, I just knew that this was going to be a real knock out of the park hit. I just knew it. Well, it is not only a great read but it is beautifully drawn with a great style that allows Disney to show a new side to these characters.

In the first issue we get introduced to the character we all know and love, Dreamfinder, under the name of Blarion Mercurial. We met him when he is a young inventor at a very prestigious scientific London institution but is rather scrutinized for his irrational inventions. Of course due to these inventions we find out how the dragon Figment came to be. This is really a neat story, one that has never been told before by Disney. So it is new ground for these characters and if you love them like I do, I couldn’t recommend checking out this new series.

There are also a tons of little Easter eggs too for those hardcore Disney fans, so keep an eye out when reading. Honestly, as good as this issue was, I see such potential in the series and I have a feeling that Disney is really going to have a lot of room to expand this story and really give fans a great look into the work of the Dreamfinder and his friend Figment. I cannot wait to see what they have in store for issue 2 and also what other properties are they going to develop next after this one becomes a big success. I would like to suggest “The Haunted Mansion”!