From the albums new wave tinged opener “All For Sale” to edgier tracks like “Brick” and “Lost Cause” the debut offering from punk super-group Fake Names is a fun and fresh listen that packs a familiar feel courtesy of the bands well known line up. Clocking in at just under 30 minutes the album is a balance of sounds and influences which make up for the short run time. Tracks like “Darkest Days” and “Weight” were personal stand outs as they contained some really cool guitar riffs and sounds that I just kept going back to for multiple listens.

I always find it interesting when groups like Fake Names come about as often times they showcase different sides of the musician involved. This album definitely gives you those moments while still offering the right amount of familiarity. Each member turns in a solid performance making it seem as though the band has been performing together for a long time. During this unique time in the world the debut offering from Fake Names is just what you need to lift your spirits. From its cohesive song structures and catchy choruses this is an album that will certainly brighten your day.

SELF-TITLED DEBUT OUT MAY 8

“It’s a more existential song, about taking a look at yourself and accepting the role you’ve played in your own life,” he Lyxzén about the track. “It’s about growing up and moving forward, and learning from past mistakes and failures.”

In early 2016, Brian Baker and Michael Hampton met up at Hampton’s Brooklyn home to play some guitars and see “if anything shakes out”. Friends since first grade, the two guitarists ended up writing four songs that day, and closed out the session deciding to continue the collaboration and get a band together to play the songs live as soon as possible.

Baker and Hampton recruited Johnny Temple (another elementary school alumni) to play bass. Later that year while Baker and Temple were performing at Chicago’s Riot Fest, they ran into Refused frontman Dennis Lyxzén (also on the bill) and spontaneously asked if he’d be interested in joining their new band. To their amazement, he said yes. The band gelled, and they started to record music that winter.

Co-produced by Hampton and Geoff Sanoff (A Perfect Circle, Jawbox), Fake Names’ self-titled debut gives a nod to early UK Punk and Power Pop as well as the seminal groups from which the members emerged, yet remains modern and pertinent, with infectious melodies and vocal harmonies complementing Lyxzén’s heartfelt vocals and thought-provoking lyrics. 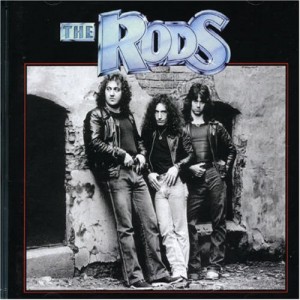 Media Mikes had the great pleasure recently to speak to not one but two legendary heavy metal musicians. Dave “Rock” Feinstein and Carl Canedy make up 2/3rds of the band The Rods a band which has been carrying the flag for heavy metal and hard rock since the late 1970’s. Both members have new solo albums out along with a newly released Rods single titled “Great Big Fake Ones” and we spoke with the guys recently about these new releases and their plans for the coming year.

Adam Lawton: Can you tell us about the decision to re-issue “Heavier Than Thou” and
“Hollywood”?
Dave “Rock” Feinstein: “Heavier than Thou”, and the “Hollywood” albums have been albums that wanted by the fans for a long time.  We felt that now was a good time to re-issue them.  They are both slightly different than a traditional RODS album, so I think that’s what makes them so interesting to the fans.
Carl Canedy: We’ve been in the process of re-issuing a lot of our back catalog that we own the rights to. These two CD’s in particular were something the fans had not had a chance own in a re-issued, re-mastered format. Fans have been emailing us for years asking when they’d be available. So like Dave said it simply was time.

AL:  What can you tell us about the newly recorded Rods track “Great Big Fake Ones”?
DF: There are many words that have been used to describe the song, but when Carl brought the song in, the three of us just felt that it was so funny, and just different enough to make the fans want to hear it.  You have to take it for what it is.  It’s not a traditional RODS song, but it is a very catchy tune that should make you laugh.
CC: The guys have been really cool about doing a song this since I initially brought it to them. It’s clearly a “one-off” type of song. The fans who’ve heard love it. I think as long as you realize it’s “tongue-in-cheek” you can enjoy it for what it is. Personally I love it and think it’s quite amusing. I gave it to the guys and when it came time to record it was done quickly. Rock and Garry really nailed the vocals.

AL: You both recently released new solo albums. Can you tell us about those and some of the guests who appear on the albums?
DF:  “Clash of Armor” is my forth solo release now and was done mostly by myself and Nate Horton. On my previous releases I have had quite a few guest performers. In the past guys like John West, Michael Butler, Jeff Howell and Matt Barnes have all come in to help me on various tracks as has Nate. On the song “Bitten By the Beast” from my 3rd solo release I had Carl and Garry come in. I played guitar and Ronnie James Dio did the vocals.
CC: On my CD, I have John Hahn, a Leviathan artist who is a Mike Varney discovery. I’ve known John for quite a few years as I played on his first solo CD in the “90’s. Mark Tornillo has 3 vocals, Joe Comeau has 2 vocals and David Porter has 2 vocals. Chris Caffery came in and did some soloing on 2 tracks as well as several other artists who graciously brought their talent to this project.

AL: With a career spanning multiple decades what do you find these days to be the most rewarding part of being a musician?
DF: It’s rewarding to still be able to create new music.  Of course playing live is the ultimate rush, and to know that there are still fans around the world checking out our music and wanting more.

AL: Are there any plans to perform this new material live and what type of
plans do The Rods have in place for 2015?
DF: I think I can speak for the three of us that we love to perform live, and if a song of ours merits being performed live, then we will do so.  Right now for us we take every request to perform seriously, and try to do as much as we can to make these live appearances happen, For us and for the fans as well.
CC: We do have a few dates in the works that are not yet confirmed and we have confirmed the Defenders of Old Festival in March with Exciter. We’re excited about this show as it’s the first time in years we’ve been to the NY area. Also, I love the band and the guys in Exciter so I’m looking forward to the reunion.