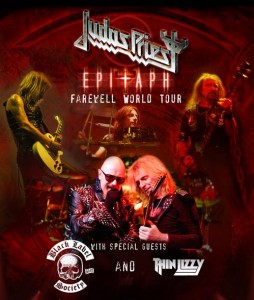 The Epitaph Tour headlined by Judas priest made its way to upstate New York on Nov. 16th playing to a near capacity crowd. The tour is slated to be the last tour for heavy metal legends Judas Priest who will be retiring from the road after almost 40 years in the music business. The crowd consisted of a variety of ages that ranged from pre-teens on up to what appeared to be grandparents. DJ Lady Starlight kicked off the night spinning a variety of heavy metal classics which she would continue to do in between each of the other acts sets. Thin Lizzy took the stage first playing a variety of hits. Though the crowd’s reception to the band started off luke warm classic tracks such as “Jail Break” and “The Boy’s Are Back In Town” quickly won the audience over.

Black Label Society took the stage next and was surely a crowd favorite. Zakk Wylde and company put on a stellar performance which seemed to work the crowd into a rabid frenzy. Songs such as “Crazy Horse”, “Fire It Up” and “Stillborn” gave the crowd plenty to bang their heads to. Though the band only played an hour each member appeared to give it their all. The assembled masses in return showed their appreciation in a variety of ways.

Judas Priest would take the stage next to close out the night. The stage featured a chain link motif that only added to the fact that after 40 years in the business the band are still the kings of heavy metal. At times throughout the set I found it hard to hear Rob Halfords vocals which seemed to get lost in the mix. That aside the band was extremely tight. Newly added guitarist Richie Faulkner who replaces K.K. Downing did an excellent job and seemed to fit right in with the veteran metalers from Birmingham, England. The set featured a variety of classic songs assembled from the bands vast catalog. Songs such as “Diamonds and Rust” Screaming for Vengeance” and “Hell Bent For Leather” which featured Halfords signature of riding a motorcycle across the stage were definite highlights.

If you are fan of both classic and newer heavy metal you will want to check out the Epitaph Tour. Not to mention this will most likely be one of the last times you will be able to see Judas priest live.

Thin Lizzy Set List:
Are Your Ready
Waiting For An Alibi
Jailbreak
Massacre
Emerald
Killer On the Loose
Rosalie/Cowgirls Song
Black Rose
Cowboy Song
The Boys Are Back In Town