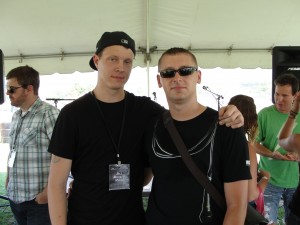 Matt Carter is the lead guitarist for the South Carolina based band Emery. Emery released their 5th studio album earlier this year titled “We Do What We Want”.  Media Mikes caught up with Mike at this year’s iMatter festival to talk about the release as well as the bands future plans.

Adam Lawton: How did you guys first get involved with the iMatter festival?
Matt Carter: I’m not really sure how that all worked out. As a band we love to go out and play festivals in the summertime. We really like being in that type of setting and we try to play as many as we can. With iMatter being a newer festival we really wanted to play it.

AL: Can you tell us about the band’s latest release “We Do What We Want”?
MC: The album came out earlier this year and it has been received really well by the fans. It a little bit heavier than our previous records. When we first came out as a band we were very heavy and we were trying to push those limits. However in the last 10 years since we have been writing songs together certain things have changed in music. We want to continue to stay cutting edge so we decided to push things further than writing regular verses and choruses. We really pushed ourselves and that’s what this record is about.

AL: Can you tell us any great stories from being on the road with the band?
MC: My favorite moment would have to be probably the worst tour moment as well. We had purchased a bus that had no air conditioning. We put fans…but the generator never worked either. We were crossing the desert and at one point we stopped. All we had were these two roof vents for air, so it was like being in a tin can. It was about 120 degrees in this thing at night. It was early on when we first got this bus, so we didn’t have beds or anything like that made up and people were just lying around.  People were complaining so much that it made it almost enjoyable for me to sit and listen to them. I really had joy in that moment. (Laughs)

AL: If you could pick one band to share a stage with whom would it be and why?
MC: We would love to play a show with Weezer. They are one of our favorite bands.  They are a large band and they are still making music. It would be really fun and they are our heroes for getting to music on a long term basis.

AL: What are the bands upcoming plans?
MC: We are going to begin planning for a new record. We haven’t written it yet but we are going to start doing all the pre-planning stuff such as where and when are we going to be doing the album. It will take awhile as we currently don’t have any plans to write just yet.  We will be starting to make plans for which direction we want the album to go and what tours we want to get on.