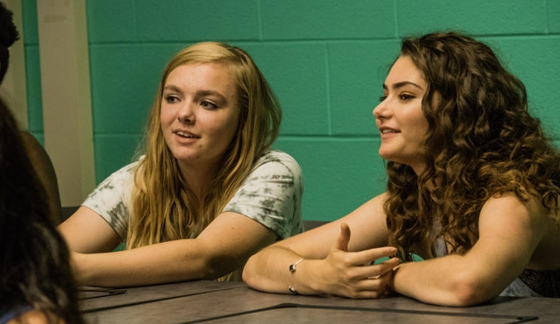 Cringy. Heartfelt. Anxiety inducing. Unflinching. Heartbreaking. Hopeful. “Eighth Grade,” Bo Burnham’s debut film, seemingly has it all, and it does. You can’t call “Eighth Grade” a coming-of-age movie because the character in this film is 14-years-old and about to head into high school. Kayla (Fisher) still has a lot of growing to do and the point ‘A’ to point ‘B’ journey in this film at least reassures viewers that there’s a bright future for Kayla despite a lot of nerve-wracking speed bumps along the way.

Kayla paints a social media portrait that she’s happy, an advice guru, and seemingly has this near-perfect life. She uploads videos onto Youtube detailing her own life, the lessons she learns and how to radiate confidence. She’s also constantly updating her Instagram and Snapchat (sorry for those of you wondering about her Facebook, Generation Z doesn’t use it and it’s not cool anymore). But behind this online facade, Kayla actually doesn’t have friends, no viewers on her Youtube channel, and was just awarded the quietest kid in school (what school official thought that was a good award for the student body to vote on?).

“Eighth Grade” is all about Kayla’s final week in middle school and her preparations for high school. Most people will relate to Kayla’s urge to hit the reset button after a less than stellar outing in middle school. That relatability is what will allow the movie to eventually make your stomach do summersaults and potentially tear your heart in two. But luckily for the audience, Burnham shows restraint and puts away the dagger that he could have easily plunged deep into your heart.

My experience with this film was like the first time I watched Burnham’s stand-up. It was something I had seen before, but it felt new because of how personal and forward it was. Just like his stand-up, “Eighth Grade” pulls no punches in delivering some biting, brutally honest commentary. The apprehension is temporarily relieved multiple times throughout by well-scripted jokes, usually playing off teenage cluelessness and growing pains. Burnham is kind enough to keep everyone, characters and audience, in on the joke instead of making either the butt of one.

So much of Burnham’s soul is laid out in “Eighth Grade,” and not just through Kayla. Her father, played by the great Josh Hamilton, embodies much of what Burnham most likely experienced with his parents or he’s simply conveying his own parental ambitions of nurturing and care for when he becomes a father. But just because Kayla is a girl and she’s being raised by a single parent, doesn’t mean both characters speak volumes for everyone, regardless of gender, color, creed, family dynamic, etc.

“Eighth Grade” is a harrowing, sincere trip through one of the most emotionally vulnerable times in people’s life. I’m sure that some people didn’t have the kind of middle school experience Kayla had, but it’s a refresher for us to remember we’re all human and all feel the same kinds of raw emotions. There are even some solid teaching moments for the tweens who do eventually pile into the theater or watch this film at home. Burnham proved he’s a formidable force in comedy over the past several years, and now with “Eighth Grade,” he’s proven that he’s a formidable force in the film industry.