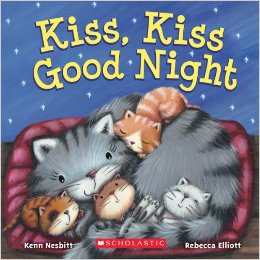 A snuggle, a hug, a kiss, a nuzzle. What wonderful ways to show you love someone. “Kiss, Kiss Good Night,” is a warm, loving, cuddle-inducing book. The animals in this book are all going to bed and before they fall asleep, their mothers each give them a sweet sign of love. There is nothing better than a mother’s love, especially at night. Kenn Nesbitt captures just what it means to love and be loved.

Rebecca Elliott is an incredible illustrator. She beautifully portrays a mother’s love with her adorable animal pictures. In every furry detail, there is a bit of love. This is a wonderful bedtime book. I can’t wait to read this to my daughter every night! 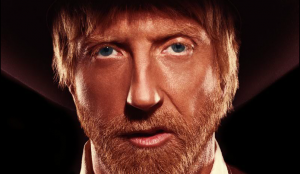 Chris Elliott is the star of Adult Swim’s “Eagleheart” playing the role of US Marshall Chris Monsanto. The show is entering its second season on April 12, 2012. Chris is known for his film’s like “Groundhog Dog”, “Scary Movie 2” and “Cabin Boy”. Media Mikes had a chance to chat with Chris about “Eagleheart” and what we can except from the second season.

Mike Gencarelli: What do you like most about playing US Marshall Chris Monsanto this season?
Chris Elliott: It is bigger, badder and more bloodier than season one.  Also it is more surreal that season one.  It has all these different plot turns and twists, all in 11 minutes.  It feels like a bigger show than last season and I thought that last season felt really big.

MG: Each episode is 11 minutes, how do you enjoy working in that format?
CE: Even though it is only 11 minutes long, it is the hardest show I have ever worked on.  It is so jam packed.  I also have to work with Brett Gelman…so…you know that feel a little long than 11 minutes [laughs].  Maria and Brett are just brilliant.  This season we get to do more plots with the three of us not just me.  The show is more evenly divided…so I have even less work to do [laughs].

MG: The show is so over-the-top and follows no rules, have you ever been told to tone it down on the show?
CE: It been pretty much no-holds barred.  I mean, with any network, Adult Swim will have notes on some scripts but in general we are left alone to do what we do.  That is really to Adult Swim’s credit. This show cannot be done anywhere else and if it was it would be a watered-down cop parody.  This show was always planned to be this fun, surreal almost psychedelic trip.  It really feels like that to me.  So much of the show is depending on editing and how fast it moves.  Sometimes I wished I had a little more time for a moment of acting here or there but we are so short on time you have to sacrifice that for the little bit of story we are telling.  You make up for it though with the laugh that you get with just how fast this thing is moving and that is a best part of it.

MG: Is there room for improv during shooting?
CE: That is a really good question.  We are like to improvising and like playing around…and we do on the set but not usually when the cameras are rolling.  We are usually on a really tight shooting schedule.  Also we know that once these scenes get into the editing room, you can only use the essential things you need to move the story along.  So there really isn’t a lot of room for improvising.  You can change line a little here or there or an alternate joke. In terms of going crazy for a whole scene, the rare times we do get to do that it hardly ever makes it in.

MG: Well there is always room for that material on the DVD releases, right?
CE: Yeah, that’s right.  Exactly, extra content!  Well the good thing is about these writers, Michael Koman, Andrew Weinberg and Jason Woliner, is that everything is funny right on the page.  There is little need to punch anything up.  These guys are really great writers.  They are especially good writing for me since they known I don’t like to learn long lines [laughs].

MG: Are you completed with shooting the season yet?
CE: Season two is done.  We are waiting to hear about season three.  I am sure we will do another season.  Then we will see how old I look after that and well see about a season four.

MG: What is the typical length it takes to shoot each episode?
CE: Well it is hard to pin that down since we shoot a number of episodes all at once. Honestly, it is probably only about two days per episode…maybe three.  In one shooting day, we can be shooting scenes, all out of order, from three different episodes at the same time in one day.  All the scripts are written in advance.  That is the only way we can do it with the budget we have.

MG: I hear we got some pretty sweet guest stars for season two?
CE: We have Ben Stiller this season.  Dean Norris from “Breaking Bad” pops in.  We have Bud Cort from ‘Harold and Maude”.  Lastly we have Conan (‘O Brien), who has a guest appearance as well.

MG: When is “Eagleheart: The Movie” coming out [laughs]?
CE: I will honestly do anything with this creative team, Adult Swim and my co-stars.  I think we all work together really well.  We talked about if we should do a 30 minute “Eagleheart” but it would actually change the show quite a bit.  You would have to slow it down quite a bit, you couldn’t maintain that pace.  So who knows?

MG: Tell us about what we can expect from the DVD release of the first season?
CE: We did commentary on a bunch of the episodes.  There is our comic con appearance footage.  I think there is also a gag reel included as well.  It is just packed with great stuff.