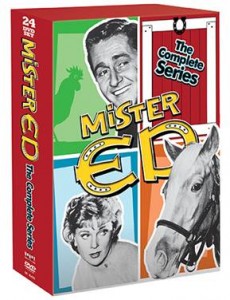 “Hello, Wilbur!” I remember watching “Mister Ed” as as kid and being amazed at the fact that horse was moving it lips. Of course, of course this is before the whole peanut butter reveal for me. This show is still one of my all-time favorite sitcoms. This is a true television classic and still holds up today to be very funny. Be honest and tell me that you can hear this theme song and continue to whistle it the rest of the day! “Mister Ed: The Complete Series” delivers us all six seasons of the show within its 143 episodes. If you are a fan of this series, this is the set to get…and just in time for the holidays.

Official Premise: Architect Wilbur Post (Alan Young, Duck Tales) and his wife Carol (Connie Hines) have settled into a beautiful new home, complete with a barn in the backyard…and a very unique tenant. Wilbur finds that the former owner has left his horse behind. He soon discovers that this is no ordinary horse, as the eloquent Mr. Ed can talk, but only to Wilbur! The anxious architect and the pontificating palomino soon become the best of friends, leading to all sorts of comedic misadventures. 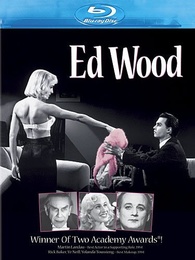 I remember counting down the days until the release of “Ed Wood”. After watching Depp/Burton collaborate in 1993’s “Edward Scissorhands”, I became a lifelong fan of both. I was also a big fan prior of “Plan 9 from Outer Space”, despite how “bad” it is. This film was like nothing like I had ever seen at the time. Depp’s performance in the film is honestly one of his best. He completely embodied the role of Edward J. Wood Jr. Although “Ed Wood” didn’t muster up a wide audience and the film wasn’t really given a proper background. In 1994, Depp still wasn’t considered a sure-fire for hits back then. I loved the fact that this film was shot in black-and-White and just screams Tim Burton. Fans of his work and this film should not miss this great HD upgrade. Good job Disney!

The 1080p transfer looks great with this black-and-white film. Cinematographer Stefan Czapsky actually shot the film on black-and-white stock, which is something that is not as widely available in today’s times. The film has it spots here and there of slight noise but I feel that it plays with the film’s indie aspect. The audio track includes an excellent DTS-HD MA 5.1. It features clear dialogue and works well with Howard Shore’s score. Note: this is rare that Tim Burton didn’t use Danny Elfman for his score.

The special features are ports from the 2004 DVD, but are still very impressive. There is a jam-packed commentary track (well sort-of) with Director Tim Burton, Actor Martin Landau, Co-Writers Larry Karaszewski and Scott Alexander, Director of Photography Stefan Czapsky and Costume Designer Colleen Atwood. These are various interviews complied together into the track. There are five short deleted scenes, all which I enjoyed. There is a music video composed by Howard Shore for the title theme. “Let’s Shoot This F#*%@r!” is a behind-the-scenes look tracked with Depp. “The Theremin” focus on Shore’s score. “Making Bela” shows how Martin Landau transformed into Bela Lugosi. “Pie Plates Over Hollywood” features Tom Duffield discussing about his own challenges on the film. Lastly there is the theatrical trailer included. 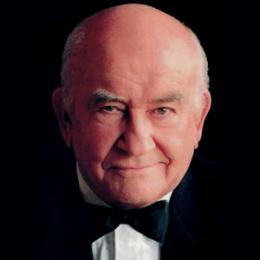 Even though Mike G. spoke with him last year (click here), I jumped at the chance to speak with one of my favorite actors, Ed Asner. Well known for his work on such series as “The Mary Tyler Moore Show” and “Lou Grant,” my favorite Asner performance showed a side of him that few people familiar with his comic chops would ever expect to see, that of the cruel father Axel Jordache in television’s first mini-series, “Rich Man, Poor Man.” His work earned him one of his seven Emmy Awards (out of a total of seventeen nominations to date). Two more personal reasons excited me about speaking with him: he was born here in Kansas City and one of my colleagues in the critic’s circle, Marie Asner, is married to Mr. Asner’s cousin, Harold. While promoting his new film, “Let Go,” Mr. Asner talked with Media Mikes about his love for acting, sequel talk regarding “UP” and his favorite characters.

Mike Smith: Fill us in on your character in “Let Go.”
Ed Asner: He’s an old con but very incompetent. If you remember “The Gang That Couldn’t Shoot Straight,” he’s the whole gang rolled up in one. But he’s a loveable old turkey – he has character, he has affection and love. He has a beautiful woman that he loves in the film that he stupidly does not pursue because his brother is pursuing her at the same time. He is constantly ignoring the gift horse that is being offered him in life and chooses the harder means of making a living and failing at it, which is choosing to be a stick up man. He’s pretty tragic but funny at the same time.

MS: You’ve won seven Emmys by portraying some of television’s most memorable characters. Obviously there’s Lou Grant, but you’ve also played Axel Jordache in “Rich Man, Poor Man,” Captain Davies in “Roots” among others. Do you have a favorite among them?
EA: I could not never deny the seven years of playing Lou Grant on “The Mary Tyler Moore Show.” It was a joy to share the power of that writing and to delight people with that writing and to be able to carve out a character to execute that writing. Those seven years are a precious package. In terms of one shot characters, the epiphany I had doing Axel Jordache…the feelings and respect I had for that character…that creature… in what I think is one of the most memorable mini-series in history…it gives me great joy to be identified with that man.

MS: Ernest Borgnine worked well into his 80’s because he still loved the process of acting. Is that what keeps you so busy? By my count you have no less than five projects in the works right now.
EA: Ten years ago I would have been happy to be doing just one of those. To have four or five in the can is certainly a pleasure. Acting is the air of my life. It’s my oxygen. Put me in the box if I can’t act.

MS: Any word on a sequel to “UP?”
EA: No. With each passing year “UP” continues to grow in people’s memories. I love the singularity and the fact that it remains a solitary gem all by itself.

MS: When are you coming home? We miss you here.
EA: I was home in June. I did my one man show as FDR for a fund raiser. Apparently you didn’t haul your ass out there, did you? (laughs)

MS: I did not. My son got married in June and to be honest I didn’t know you were in town. I’m going to have to scold Marie next time I see her for not telling me you were here!
EA: Give Marie a big fat kiss for me! 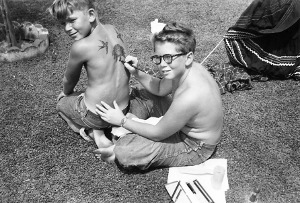 Having two tattoos myself, I am not against getting inked. In fact, I feel that some tattoos are real works of art. Ed Hardy is known best for his amazing tattoo imagery, especially Japanese inspired artwork. I enjoyed the background on how Ed got started and how he got inspired to create the work he has. The film runs slow, even for a short 75 minutes.

The angle that this documentary takes focuses on Ed Hardy and details his unexpected rise to cult status. The film also shows how he has effected modern tattooing and his phenomenal influence on pop culture. Besides interviews with Hardy himself, there are also interviews from other industry well-knowns and tattoo aficionados.

The extras are decent with deleted scenes, which some are decent to check more. Also there was additional interviews and more tattoos and artwork included. They are worth being checked out but only if you enjoyed the first 75 minutes from this disc. An interesting feature is 2000 Dragon Scroll focuses on Hardy’s scroll painting of 2,000 dragons to commemorate this Millennial Dragon Year.