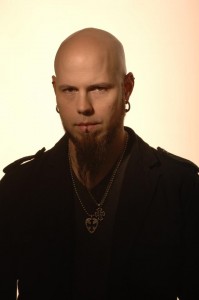 C.J. Pierce is the guitarist for the Texas based heavy metal band Drowning Pool.  In recognition of the 13th anniversary of the group’s debut album “Sinners” Drowning Pool with be hitting the road with special guests Adrenalin Mob and Full Devil Jacket. To coincide with the tour the band is also releasing a two disc anniversary edition of the “Sinners” album which features rare demos, remixes and two unreleased tracks. Media Mike spoke with C.J. recently about the upcoming tour, the anniversary edition of the album and what the band has planned for new material.

Adam Lawton: What can fans be expecting from the bands upcoming anniversary tour?
CJ Pierce: Over the last few years this band has dealt with a lot of unlucky situations. From the loss of singers to other person stuff that may come out in a book one day but really this tour/release comes at a perfect time. With it being 13 years since the “Sinners” album came out and the band being in a really good place right now we wanted to do something special. The album is a two disc release which features demos we did for the “Sinner” record along with the initial tracks featured on there and a track that was the last thing we worked on with Dave Williams before his death in 2002.  The album has also been fully re-mastered. We are planning to play the entire album from front to back along with a few other great songs so it should be a great time for everyone.

AL: Are there any songs from the release that this will be the first time they have been performed live?
CJP: When that album first came out we certainly played all those songs a time or two. There are some that we haven’t played since Dave passed away. It’s going to be a lot of fun to bring some of those older songs back to the set especially with fans getting to hear the remixed versions on the anniversary album.

AL: What was it like going back in and working on these songs again?
CJP: It was way more emotional than I thought it would be. I found the old DAT tapes from the “Sinner” sessions and we remixed and cleaned them all up. When we first did the record it was a rush job because we didn’t have a lot of time or money. It was great to go back in and fix stuff so you could hear everything. I was able to isolate Dave’s original vocal lines and it was like he was in the room with me. It was a good vibe the whole time. During the same time I found a bunch of old tour footage with Dave in it along with some footage of our last session with Dave. It was awesome to find that stuff and put it out for the fans.

AL: Can you tell us about the video for the song “Soul” and its Indie GoGo campaign?
CJP: That video is made up of a lot of the footage I found during work on the album. As part of it we wanted to make something as a tribute to Dave. Some of the footage goes back to even before we were signed so it’s a really cool video. There’s even some footage of us doing this song even though it wasn’t included on the original release of the album. As for our work with Indie GoGo we really aren’t the type of band to make money that way but we wanted to do something special with this video/song. We came up with a Dave Williams shirt which for everyone sold all of the money will go to the American Heart Association. We want to raise $13,000 to match the anniversary date. Dave passed away from a heart condition so this sort of our way of giving back to an organization that helps treat heart related issues.

AL: Is there anything in the works for new material from the band?
CJP: Definitely! We probably have more material written right now than we have in the entire Drowning Pool catalog. It’s just a matter of picking which songs we want to use and which direction we want to go in. There have been several instances where we thought we had the record but then went out on tour, came back and wrote a bunch more songs. We continue to write all the time but right now we just have to decide which ones we want to use. We want to be in the studio sooner than later.

AL: With this tour running through March and into early April are there more tour plans beyond that for this year?
CJP: We have a lot of one off shows scheduled for the coming months. That’s really what we have going till the new album comes out. We are booked as far out as October with weekend shows so a lot more will start happening once the new album comes out.