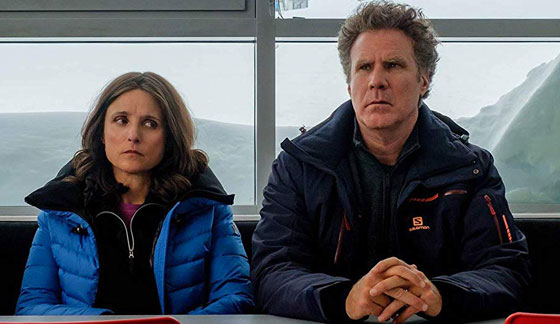 WARNING:  Do not be fooled by the previews for the film “Downhill” which highlight a few humorous scenes from the film.  If it’s funny you’re looking for…this aint it!

Pete and Billie (Ferrell and Louis-Dreyfuss) have arrived in Austria for a skiing vacation with their children.  On the surface things seem fine and the first night in their hotel goes swimmingly.  The next morning Pete brings out his father’s old ski hat and we learn that he is still grieving the man’s passing several months before.  While lunching on the terrace of their chalet a “planned” avalanche heads towards the chalet and buries everyone on the terrace in a pile of snow.  Except for Pete.  At the moment of truth he has hopped off his chair, grabbed his cell phone and run off, leaving Billie to try to shield her sons from the white peril.  They are fine but Billie can not understand why Pete left them.  And here is where we learn the film’s title refers not to the skiing but to Pete and Billie’s relationship.  Are you laughing yet?

Based on a French film titled “Force Majeure” – a term which is defined as  “unforeseeable circumstances that prevent someone from fulfilling a contract” – “Downhill” is more a drama than a comedy.  Pete must deal with his feelings of loss regarding his father and the look of shame in his boy’s eyes for his cowardice.  Billie must deal with her perceived loss of trust in Pete to look out for and care for the family.  A “chance” meeting with one of Pete’s co-workers and his lady friend, both of whom seem carefree compared to Pete and Billie, only make things worse.  There are some funny parts but most of them are contributed by Miranda Otto who plays “Charlotte,” a lady at the chalet looking to enjoy her life and the adventures it holds.

Not to say that Ferrell and Louis-Dreyfuss aren’t fine in their roles.  They each handle the dramatics well.  I think it’s the fact that the film took me off guard concerning it’s theme that resulted in the rating I’ve given it.  I mean, I honestly think I laughed more at “Joker.”  Co-directors Faxon and Rash also did the same thing on a film I loved called “The Way Way Back.”  They also co-wrote it, as the did here along with Jessie Armstrong.  “The Way Way Back” was also a mix of drama and comedy but it had something that “Downhill” is clearly missing.  Heart.

Media Mikes has teamed up with their friends from Fox Searchlight to give (35) readers and a guest the chance to be among the first to see the new comedy “Downhill,” starring Will Farrell and Julia Louis Dreyfuss.

The film will be screened on Monday, February 10th at the AMC Town Center 20 Theatre in Leawood, Kansas and will start at 7:00 pm