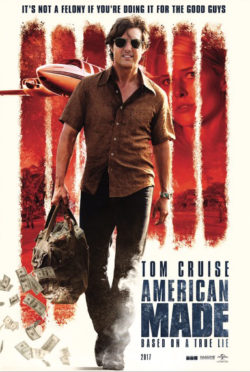 How does a TWA pilot go from tedious commercial flights and a blue collar existence to the Walter White of international arms and drug sales? The tale of Barry Seal (Cruise) almost seems to outlandish to be true as he finds himself working for the CIA and one of the most notorious drug cartels, at the same time. The tag, “Based on a True Story,” is stretched to the max in “American Made,” but at least they had a hell of a time embellishing the facts and telling a few fibs along the way.

We meet Seal midway through life and quickly learn that he hasn’t always been straight and narrow. Even while charting passengers across the country on the daily basis as one of the youngest pilots to be hired by the once major airliner, Seal was a low-time smuggler. Apparently smuggling Cuban cigars here and there for some extra side cash was enough to attract the attention of Schafer (Gleeson), a mysterious CIA agent who wants Seal to take his aeronautical expertise to help spy for the U.S. government.

Spying then turns into drug and weapons smuggling for both sides. At $2,000 a pound, Seal gladly begins smuggling cocaine for the Medellin Cartel. And when spy photos aren’t enough for the CIA, under the direction of the Reagan administration, Seal is asked to help run guns to the Contras. Seal is even given a slice of land by the U.S. in rural Alabama so that he can keep up the charade that he’s a small-time business owner who happens to own his own tiny airport and fleet. Of course all of this is only the tip of the iceberg as Seal goes full-Heisenberg and carves off his own slice of the criminal underworld to create a smuggling juggernaut.

For historians, “American Made” is pulpy trash, glorifying a drug smuggler turned informant, but for everyone else it’s a funny and entertaining take on a biographical crime tale. Cruise, who’s best when he’s unbalanced, is the every man of Louisiana looking for a thrilling escape from monotony, and finds it by playing both sides of a dangerous game. Cruise is doing some of his best humor since “Tropic Thunder” and finding fresh acting life outside his stereotypical smug good guy role.

But “American Made” suffers from pop-culture being saturated with multiple anti-heroes over the past couple of decades. Everyone from Omar Little of “The Wire” to Tony Soprano of “The Sopranos” have familiarized audiences with the genre’s tropes so much so that much of the film’s runtime comes with few surprises, making for an elongated ending to Seal’s entrepreneurial smuggling empire. That’s not to say that “American Made” spends most of its runtime having fun. The film proves that maybe in 30 years, we’ll be able to have a good laugh about the current impending doom we’re experiencing with North Korea’s nuclear capabilities. Maybe.

“American Made” works best as a comedy. There are hints of global political satire, where at the end of the day, no one is really the good guy and that it all comes down to who’s responsible for the lowest body count. That kind of bleak humor is kept on the back burner as Seal smooth talks his way out of precarious situations. There are also plenty of visual gags to feast on, outside of Cruise’s physical and verbal humor.

In amateur hands, “American Made” would be a mixed bag, but Cruise and Director Doug Liman, who previously worked on “Edge of Tomorrow,” combine for infectious manic energy. Cruise makes” American Made” charming in a way that Jon Hamm made Don Draper a likeable womanizer and scumbag. Cruise isn’t only slick with criminals and government officials, but he’s also drawing in the audience to cheer on his illegal shenanigans. History be damned, “American Made” is an engaging circus act with a realistic final bite to keep its audiences grounded in reality.