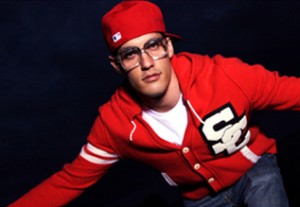 DJ DainjaZone is a member of LMFAO’s Party Rock crew. He has recently taken up residency at Las Vegas’ LAVO and will also be filling in for DJ Air on LMFAO’s current tour. Media Mike had the chance to talk with DainjaZone about his newest gig and what got him started DJing.

Adam Lawton: What got you into djing?
DJ DainjaZone: It was something that I had just a small interest in. The plan was to be a major league pitcher and have a DJ set up in my mansion of a living room. That fell short. Before that fell short I started DJing in New Mexico while I was there playing baseball for New Mexico State University. We had a big Halloween party coming up so I said I would DJ. I went out and bought a CD mixer so I could control the music. I was into the old school hip-hop and not what was poppy or hot at the time. I just wanted to play the older stuff at first. I eventually evolved in playing what is hot today.

AL: Would you say the basis of your style is mostly old school?
DJ DainjaZone: I am all about adapting to what is going on. I like to grow and be ahead of the curve. I would say my style is definitely new but it has a lot of old elements to it. Sometimes it just comes down to song selection. For the most part it is new. I edit all of the tracks that I use. I have personal edits of just about everything I use. That way what I am presenting to the crowd is unique and it won’t be heard anywhere else. We all have access to the same tracks so I create my own edits. I have my own a capella ins and outs. I just like to make it sound different than what is going on. This creates for a unique beat.

AL: What generally sparks you interest when creating a track?
DJ DainjaZone: Inspiration comes at any place and time. I can be in a club listening to a DJ and they will play one song and something will pop in my head about that song. There style will have nothing to do with that but when inspiration hits me and I think I can take a song and do certain things with it and that’s what I will do. I can take a song people are familiar with and intro it three different ways. These will be something you have never heard before. A lot of time inspiration comes from the club. I go to clubs and study DJ’s and the crowd. When I am there it’s always business.

AL: How did you initial get involved with the Party Rock Crew?
DJ DainjaZone: I have a couple friends who were close with LMFAO’s manager. Through those people I eventually met him at a music conference. He hadn’t heard me yet but had heard about me. I guess he was feeling me because he asked that when we got back to Los Angeles that we have a meeting. We met and he still hadn’t heard me. We started talking about politics in the game and seeing where my head was at and what my ambitions were. After seeing and hearing those he wanted to take me on and be my manager. This was the summer before “Party Rock Anthem” so there was a lot evolving with Party Rock. There name was starting to grow and they were touring around America. At the time they wanted to create a Party Rock brand of DJ’s. A lot more has been added to the show and to the crew.

AL: Can you tell us about your current gig in Las Vegas?
DJ DainjaZone: It’s called “La Freak Friday’s”. La freak is actually the alter-ego of the Party Rock clothing line. If you have seen “Champagne Showers” that is what La Freak is. It is mysterious, sexy and vampire like. There is a lot of dark involved. People will associate this with Party Rock. I did the show for the first time a couple weeks ago and it went exceptionally well. They want me to rotate there two times a month but LMFAO’s DJ Air recently broke his ankle in Moscow so I am going to be filling in for him over the next 3 months. I am going to be doing the main stage and after parties with them.

AL: Do you have any other projects we can be watching for?
DJ DainjaZone: I have had to cancel a lot of dates in America because of filling in on the LMFAO tour. A lot of this stuff is taking it month my month. It depends on how Air feels. I have nothing big planned after August. My number one priority right now is LMFAO. Where ever we go that’s my priority. I am going to be trying to take more control of my own bookings. When we have open dates I will be trying to get myself some shows and fill in those days. I still have my own brand to push and I want to keep my name relevant in the DJ and club scene. I don’t want to be just be known as that Party Rock DJ. I want to have other options. I will also be starting work on a new mix tape sometime in June. That will hopefully take me back to Australia in September.