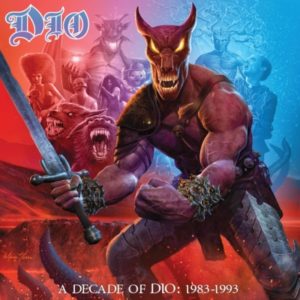 Legendary vocalist Ronnie James Dio may have passed away in 2010 however that has not stopped his legacy and music from living on. Thanks to Rhino Entertainment fans of the former Elf, Rainbow and Black Sabbath front man can experience “A Decade of Dio: 1983-1993”. The six album collection focuses on the first 10 years of Ronnie’s solo career which he embarked on in 1983. Remastered and packaged in a sleek box set featuring brand new artwork from Marc Sasso, the artist who was responsible for many of the band’s iconic covers.

The latest offering from Rhino Entertainment “A Decade of Dio: 1983-1993” isn’t just a collection of greatest hits. Instead you get the first 6 albums from Ronnie James Dio’s solo career in their entirety. Remastered and repackaged complete with replica inserts “Holy Diver”, “The Last In Line”, “Sacred Heart”, “Dream Evil”, “Lock Up The Wolves”, and “Strange Highways” all sound just as good as the originals. However I was a little disappointed at the remastering process as it didn’t seem to add anything to mix. If anything the remastering added a layer of thinness that was a bit shrill on the ears at time. Thankfully Ronnie and his bands performances are so strong on the included albums that you can easily get past the sonic shortcomings and enjoy the track for what it is. Tracks like “Last In Line”, “Egypt (The Chains Are On)” and “Gypsy” were some of my personal favorites while classics like “Stand Up and Shout”, “Holy Diver” and “Rainbow in the Dark” are always a fun listen.

If you already have these albums then there probably isn’t enough offered in this package to warrant purchasing them again. However for those looking to bolster their Dio collection then this set is worth its weight in gold. The recreated front and back album art and inserts is nice little feature as when you open up the main box it’s as if your getting 6 miniature LP’s. I think it would have been nice if the set came with a book providing background info/photos on the releases as I feel that would have given a little incentive to those who already have some of these albums to pick up this package. None the less still a cool offering, the set is available now on CD and will be released on vinyl October 4th. 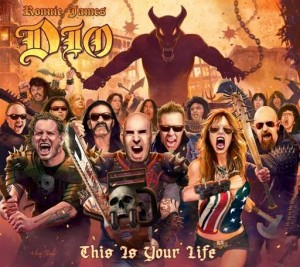 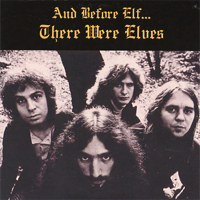 If you are expecting the Ronnie James Dio on this album that we knew and loved, you might be a little disappointed. This is a very blues-fused album with very early recordings from metal legend Ronnie James Dio. The Elves were formed in the late 60’s and are categorized as a mix between Rock, Honky Tonk and Blues. This album features 12 previously unreleased tracks from 1971 and are collections of both studio and live tracks. I definitely enjoyed the album and it definitely shows a different side of Dio that I never knew.

One of my favorite tracks on the album has to be “Stay With Me”. It is very catchy and very well orchestrated. The album runs a nice strong 53 minutes and delivers pretty strong from beginning to end. The music reminds me of a mix between “The Who” and “Grateful Dead” and a twist of the blues. This album just proves how much range Dio really had and he definitely nails it on this album. Although these tracks are 40 years old, the quality is quite notable especially since Dio’s Wyn Davis remastered from the original tapes.