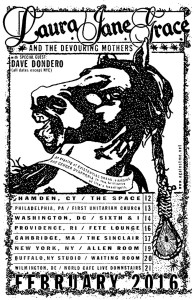 Against Me! Front woman Laura Jane Grace made a stop at the intimate Waiting Room in Buffalo, NY on Feb 20th as part of a brief 8 show acoustic tour with her group the Devouring Mothers. Also on the bill for these handful of shows was veteran singer song writer Dave Dondero. The night was part storytelling and part music as both set of performers aimed to provide the audience with a nights worth of entertainment.

As fans were still making their way up the twisted steps of the dual stage venue opening act Dave Dondero took the stage for a less than energetic set. At several points through the 30/40 minute set Dondero asked the crowd if they were actually interested in hearing him play and if not he was ok with leaving. At first what seemed like a joke carried on throughout the remainder of Dondero’s unprofessional and lack luster set.

As the room began steadily filling in Laura Jane and the Devouring Mothers (a group made up of Against Me! drummer Atom Willard and producer/ bassist Marc Hudson) would take the stage and blast through over 20 acoustic renditions of some of Against Me’s material both new and old. In between such songs as “Tonight We’re Gonna Give It 35%” and “Androgynous” Grace read entries from her upcoming book which will be made of countless journal entries and experiences. The set by Laura Jane and company was like a cooler version of “VH1’s Storytellers”. The set was a nice mixture of both new and old tracks which provided something for the various levels of fans the packed the intimate club setting. Missing from the set however was the song “500 Years” which was released in 2014 as a Record Store Day limited edition 7”. Despite this being the perfect setting for the somber number other tracks like “Because of the Shame” and “Two Coffins” filled the void nicely and, despite the of the night being a bit rocky Laura Jane, Atom and Marc did a great job as they more than made it up to the Buffalo fans.