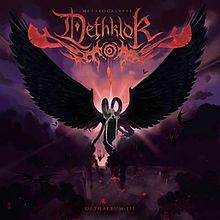 If you are a fan of Adult Swim’s animated series “Metalocalypse”, then like myself, you should be eagerly anticipating this album. “Dethalbum II” was released all the way back in September 2009.  Dethklok is the virtual death metal band from the series “Metalocalypse” and contains music from the second, third and fourth seasons of the show. The music, like the past albums, is basically all performed by the show’s creator Brendon Small with some help from drummer Gene Hoglan and bassist Bryan Beller. The deluxe edition CD/DVD includes a 32 minute behind-the-scenes documentary of the making of Dethalbum III, as well as music videos and more. If you are a fan of vinyl, like myself, the album will also be released on vinyl on November 6, 2012 (just like the first one).

Brendon had also released his first solo album earlier this year, “Brendon Small’s Galaktikon” and it could be anymore different that Dethklok (which is a good thing).  If you ever hear him speak in person, it is just a wonder how he is able to stay in character for Nathan Explosion and deliver these intense heavy vocals that he achieves so well.  So how does the album compare to “Dethalbum I & II”? Well, it is hard to say straight away.  I think it is a great continuation of what you should expect from Dethklok.  I feel that these albums are made to be played all three back to back, and just letting them tell their story out.  One thing I noticed is that the guitar work just seems so tight and really focused.  There are some riffs on these tracks that will literally throw you out of your chair, especially on “Starved”.

With Dethklok hits the road this Fall, it will be great to see Brendon and his band of virtual members really tear up the stages.  I can’t wait to hear the first single “I Ejaculate Fire” performed live and see the audiences reaction to that track live.  It will never cease to amaze me that Dethklok started out as  technical not a “real band”, yet fans have been growing and supporting this music and the band for going over five years now.  If you are a Dethklok/Metalocalypse/Brendon Small fan, doesn’t matter, you are going to be going back flips listening to this album.  I would say it is definitely worth the three year wait and in the words of Nathan Explosion, “It is totally BRUTAL”!