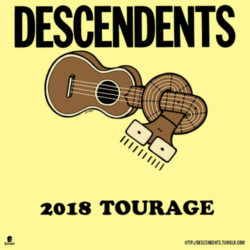 One of the biggest names in punk rock the Descendents kicked off another leg of their ongoing “2018 Tourage” tour on August 3rd at the River Works Complex in Buffalo, NY, The tour which first kicked off in April of this year and has the So-Cal punkers playing all around the US and various other countries through December. Also on the bill for the evening was the Massachusetts based A Wilhelm Scream and the Scott Reynolds (ALL) fronted Pavers.

Having never had the chance to see the Descendents before I jumped on the opportunity when it was announced they would kick off a new leg of their current “Tourage” tour in nearby Buffalo. The bands famous Milo logo adorned my skateboard growing up so it was great to finally see a band I had been following for so long. Opening up the show was former ALL front-man Scott Reynolds recently re-formed group the Pavers. Though the band had a couple rough spots during their thirty minute set Reynolds kept things moving like the seasoned veteran he is forging forward with a smile on his face which showed the growing crowd he and his band mates were there to have fun doing what they love performing tracks from the groups various albums. With little time between sets and down one member due to a missed flight A Wilhelm Scream hit the stage with a burst of energy that instantly ignited the multi-generational crowd. Vocalist Nuno Pereira worked the stage left, right and up and down for that matter as the front-man was in constant motion adding to the bands fast paced, frantic approach. Even if the band was starting out one in the hole you would have never know as the band sounded great and were extremely tight as they helped bring the crowds energy to an even higher level.

Last but not least the Descendents took the stage helmed by founding member drummer Bill Stevenson and long time vocalist Milo Aukerman. For the next ninety minutes the band completely shredded over thirty five classic Descendents tunes including “Clean Sheets”, “Coffee Mug” and the guitar-tastic “Coolidge”. After the bands initial twenty nine song set fans were treated to a mini ALL reunion when former vocalist Scott Reynolds joined the Descendents (Minus Aukerman) for renditions of the ALL songs “Fool” and “Dot”. Needless to say this caused the crowd (myself included) to go absolutely nuts. After the brief reunion Aukerman would return performing probably my two favorite Descendents tracks “Bikeage” and “Good Good Things” along with a handful of other great tunes before taking their bows and waving goodbye.

It was clearly a night of nostalgia and fun as each of the bands on the tour brought their own unique brand of punk rock to the near capacity Buffalo venue. With the Descenedents history stretching back to 1977 it would be expected for them to lose a step or two however the band sounds just as fresh and powerful as they did at their inception. With the tour running the remainder of 2018 you owe it to yourself to catch one of the many shows scheduled on the “Tourage” run as it is the perfect setting for ALL generations of punk loving fans. 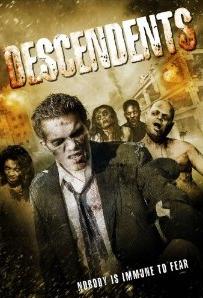 “Nobody is immune to fear”…more like nobody is immune to being bored. Zombie films are always welcome in my horror library.  This film barely registers as a horror film, yet alone a zombie film.  If it spent more time trying to be a zombie film and less on an MTV music video, it might have something. I do want to add though, I did like the color effects showcasing the apocalypse and the blood. Though story is just boring and weak and relies to much on flashbacks to help.

With a world that has turned most humans to zombies, caused by a virus, we follow a young girl, Camille, as she tries to find her mother. With the whole world in chaos and all alone Camille sets out to find others like her in order to survive.  Don’t even get me started on the film’s terrible ending.  Holy crap.

The special features on this DVD include a brief featurette “The Making of Descendents”,. There is also some music videos including Voodo Zombie, Los Ninos and Llevane, didn’t interest me at all. Lastly there is a trailer gallery. The DVD does come with a decent audio through it Dolby Digital 5.1 track, wish the scares would have been their to accompany it.