Wizard Rock originators Harry and the Potters have been performing their signature brand of magic infused rock since 2002. Consisting of brothers Joe and Paul DeGeorge the duo have performed over 800 shows at various libraries, rock clubs, art spaces, bookstores, basements, and all ages’ venues all over the world. The band’s latest offering “Lumos” is the first studio album in 13 years to be released by the group and Media Mikes had the chance to speak with the brothers recently about its creation, the staying power of Harry Potter and the bands current tour.

Adam Lawton: Can you tell us a little bit about the new album?

Paul DeGeorge: Despite not having released a new studio album in the last 13 years we have still been pretty active touring. We felt that if we were going to be able to continue to exist in this current political climate that it would be nice to have some songs in the set that reflect the current reality. Having never actually written substantially about the seventh Harry Potter book we felt this was a good opportunity to revisit that. In book seven things really come to the fore with Harry and his friends fighting against fascism and exclusion in the wizard world. It felt really relevant to us on that level and we wanted to bring that to our live shows.

Joe DeGeorge: We have a unique position to take a perspective on this as two Harry Potters commenting on our world which has direct parallels to the world we are living in now.

AL: I assume you wrote a lot of this new music more recently?

JD: We set aside some time specifically to write and record this record. Paul doesn’t live close by so it’s been harder the last few years to casually work together as a lot of our time when we are together is touring or visiting with family.

PD: We had set aside a few weeks to put things together for this as we did have some ideas going in but, it wasn’t until last year actually that we carved things out.

AL: Can you tell us about your tour which kicks off June 20th?

JD: We mostly will be hitting libraries much like we have in the past. I am really looking forward to getting out there as playing libraries is a big part of why we started this band. We could play for kids and have it be their first rock show. On this tour we are going to be hitting a bunch of new places both here in the states and in Canada so that should be fun.

PD: Accessibility has always been important to us. We didn’t just want to play for young people and their parents but we also wanted to reach those kids who felt excluded by an age restricted music scene that was 18 or 21+. Some cities are more inclusive however, by touring libraries we are performing in places which are meant for everybody.

AL: With your music being solely based around Harry Potter do you ever feel the need to step outside of that?

PD: Not for this band. We do have other musical projects that we are involved in so if we want to do something else we just start a different band. We have one band that all we sing about are clams. Specifically hard shell clams regional to the North-Eastern seaboard.

AL: With the last film being released in 2011 what do you feel contributes to the staying power/appeal of Harry Potter?

JD: I think what is so impressive about these stories is that they have such a far reach. It has become a cultural touch stone for the generation of people who grew up reading the books. They are sharing these stories that affected them and how they were markers of their own coming of age with the next generation.

PD: The continued popularity doesn’t surprise me in the least. Look at Star Wars for instance. If you look at music there are lots of bands who continue to play in 2019 that first started 50 years ago and who are just as popular today as they were then. Despite the absence of actual new material I have seen an uptick in the corporate side Harry Potter such as the merchandise and the creation of the parks (which I think are great). These types of things have certainly helped keeps things going. A lot of our fans aren’t really interested in that side of things as we have our own unique crowd.

AL: You both have other projects that you work on. Can you tell us what you currently have going on with those?

JD: I play in a band called Down Town Boys which is sort of this leftist type punk band. Our last record come out in 2017 called “Cost of Living”. Paul owns and run a shop in Kansas with my wife called Wonder Fair that deals with art, art supplies and stationary.

AL: What do you feel is the most rewarding part of taking you music out on the road for people to experience?

PD: It’s a big opportunity to connect with people. It’s great to be able to be a meaning part in people lives. Playing to young kids is such an honor as for a lot of kids we will be their first concert so that’s really great and something we take very seriously.

For more info on the band visit www.Harryandthepotters.com 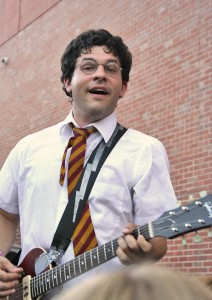 Paul DeGeorge and his brother Joe started the band Harry and the Potter in 2002. Since that time the duo have been the subject of a documentary titled “We Are Wizards” a film that delves into the impact of the Harry Potter book series on its fans. The group has also been credited with the creation of “Wizard Rock”. Media Mikes had a chance recently to talk with Paul about a variety of things related to the band.

Adam Lawton: What led you to starting Harry and the Potters?
Paul DeGeorge: It kind of started with reading the books. My brother and sort of pop culture at large turned me onto the books. I just thought there was something about the Harry Potter character that was similar to some of my punk rock heroes. I figured it would be cool if Harry had his own punk rock band.

AL: Can you tell us what some of those influences were?
PD: I would say as far as punk rock goes Fugazi as well as Adam and his Package were both real big influences. The thing about Adam and his Package was that they played really fun and goofy punk rock songs that were also smart. I remember being in college reading their tour diaries which made it sound like anyone could get out on the road and have a band.

AL: How did you guys get involved with the “We Are Wizards” documentary?
PD: We had received an email from the directors of the film telling us that they were interested in us being a part of a film they were planning that was going to talk about Harry Potter fans and different theories and phenomena’s related to Harry Potter. We said sure we would be interested and then one day they showed up to film us at our parents house.

AL: How was your experience with the filming?
PD: It was fun! Every two or three months the guys would pop up at a show or something and start shooting. As with most documentaries they use only a small portion of what they shoot. They shot some of our coolest shows ever played and I wish I could see some of the footage. I remember they were at one show in Brooklyn and it was a bigger show at a newer venue. At night I guess it’s a pretty intense place so they had their normal security crew there who were these huge dudes. These guys were patting down every 12 year old that was trying to get into the show. It started to freak everyone out so we moved the show to the space next door and it was really great. The place we had the show at now has shows pretty regular and is called Death by Audio.

AL: What is your take on being dubbed the originators of “Wizard Rock”?
PD: I guess we were in the right place and right time. (Laughs) We didn’t set out with any purpose to create a genre. A lot of what our band is about fostering the DIY punk spirit of doing things for yourself.

AL: Other than the show you already mentioned are there any others that stick out?
PD: We are all about pushing the boundaries of what you would expect a concert to be. From the start we were trying to do rock shows in libraries. The library is already a safe all ages places for anyone to go to. No one gets turned away at the library. We don’t want people to be turned away from our shows and the library is that kind of space for us.

AL: Can you tell us about the Harry Potter Alliance?
PD: The idea behind the Harry Potter Alliance was to form a real world Dumbledore’s Army and become the heroes that we read about. The books are really empowering and tell the storey of teens who all stick together to help change the world. We wanted to use the premise of the books to get youth involved with social activism and social justice issues. We try to draw parallels out of the books and relate them to real social and political issues. One of the current campaigns we are working on is that we are trying to get Harry Potter fans to lobby Warner Brothers who control all the merchandising related to the films to make their Harry Potter chocolate fair trade chocolate. Chocolate is notorious for really bad working conditions especially along the Ivory Coast where about 2/3rds of the worlds chocolate comes from. The main idea behind the campaign is to educate Harry Potter fans about the fair trade issues. We also have the opportunity to use our power as Harry Potter fans to maybe affect change on a large corporate level. We can use our leverage as an organization to get our message into the press which will hopefully influence Warner Brothers to change their business practices. We really want to tryand use Harry Potter as a tool to create global citizenship.

AL: What other upcoming plans do you have for the band?
PD: We just finished a two month summer tour and we are going to take it easy during the fall. I think the biggest thing on the horizon for us as of right now is we are in the planning stages for our annual Christmas shows. We have been doing these shows for a few years now in our home base of Boston, MA. This year will be our 7th annual Yule Ball in Boston. Last year we branched out to New York and Philadelphia which we plan to do again this year. We might possibly being do one other city but I can’t say too much about that just yet.

For more info on Harry and the Potters you can go to www.harryandthepotters.com