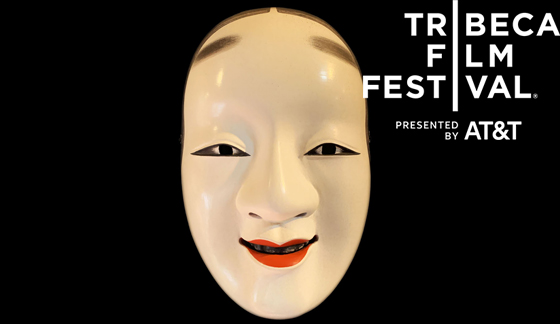 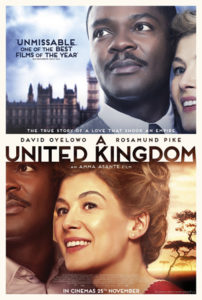 London. 1947. Finishing up his college education is Seretse Khama (Oyelowo), who will soon return to his African country of Bechuanaland (now Botswana) and become King. But before he can board the boat home he meets Ruth (Pike) at a student mixer. The two fall in love but soon realize there may be a problem. You see Seretse is black. Ruth is white. And if “To Sir, With Love” taught me anything, it’s that this combination of people is not very popular in England. But any problems they face in Britain (Ruth’s father shuns her, idiots on the street call them names) are tame compared to when they travel to Africa.

Like last year’s film, “Loving,” which dealt with interracial marriage in the States, “A United Kingdom” rises above other films dealing with the same subject thanks to the performances of the film’s stars. Oyelowo and Pike are both excellent actors and the pair carry this film on their shoulders. Extra credit to Oyelowo who must be firm and tender, often at the same time. Ruth is shocked to learn that, even in a country ruled by a black man, that there are “white only” facilities, including the local hotel. Seretse explains that because he is King he has a special dispensation that allows him to use the front door.

Of course things do not go well in Africa, as Seretse’s uncle, currently in charge, does not agree with his choice of bride. Not so much because she is white, but because he has neglected to understand how important it is and would be for a local woman to ascend to Queen through marriage. Things are further complicated by the fact that Bechuanaland borders South Africa, where the ugly head of apartheid is beginning to rear itself, upsetting the good British government which relies on South Africa for things like gold.

As the film progresses it does begin to drag a little bit, but the cast, both main and supporting, manage to create a strong story flow as far as pacing. And I have to say, there is nothing like watching a film about Africa that eventually gives us a shot of the countryside from an air plane and you see one, single giraffe romping across the plains by itself. Like the giraffe, Oyelowo is both regal and strong and, as this is Oscar weekend, his is a performance likely to be recognized next year.