“The Disaster Artist” is a film where you have to continuously remind yourself that the characters portrayed on-screen are real people and that the events that transpired actually happened. The absurdity of Tommy Wiseau (James Franco) is like something out of a fantasy novel. His confidence is matched by his obliviousness. He steps onto the stage during an acting class giving a performance that borders reveals his narcissism. On the surface, his awful interpretation of “A Streetcar Named Desire” could be viewed as intentional deadpan genius.

But in the class, looking on after failing to work up the nerve to put together any acting chops, is Greg Sestero (Dave Franco). Unlike the rest of the class, which looks on in gross astonishment, Sestero sees a man who’s unafraid of the lights, the crowd, and of his own lackluster talents. Sestero approaches the Eastern European sounding man, already aged with wrinkles, to figure out how to obtain that fearlessness. Although what Sestero doesn’t realize, is that that fearlessness was birthed in a pool of egotism. But what arises is one of the most bizarre creations of the 21st century.

“The Disaster Artist” somewhat chronicles the beginning of the friendship between Wiseau and Sestero, which led to the disasterpiece known as “The Room,” a film that’s now shown at midnight screenings around the country and mocked much like the “Rocky Horror Picture Show.” The film is almost a love letter to the boldness of Wiseau as well as the fragile bromance that develops between the two. It’s in the Franco wheelhouse, which brings in other actors and directors from that genre, like Seth Rogen, Zac Efron and Judd Apatow.

Because the film plays out as an ode and embrace of Wiseau’s misguided efforts, it does tend to gloss over some of the troubled rumblings of the production of “The Room.” Tales of gross negligence and fights are shown, and sometimes played for laughs, but we don’t get a good enough grasp on the story behind the movie. A lot of that may be because Wiseau and Sostero, in real-life, remain good friends and even still work together. It’s understandably tough to trash talk a friend, but “The Disaster Artist” could have benefitted from getting out of bed with Wiseau’s quasi-charming ambiguity.

Mirroring the film’s creation, Franco is the director, lead, and one of the producers of this film, highlighting his eerily physically similarities to Wiseau as well as perfecting the mannerisms of the mysterious man who explains away his Eastern European accent as being from New Orleans and profusely lying about his age. Franco plays Wiseau as an unlikable dolt who shouldn’t be liked or applauded for his efforts. But by the film’s end you find yourself warming up to Wiseau with likability that’s almost beyond explanation to a layman.

Generally when discussing the latest Marvel film, I don’t tend to think about how the average moviegoer, who has no prior knowledge of the other films. Marvel’s cinematic universe sometimes requires a little bit of visual homework, but superheroes are so pervasive in culture, you’d be hard pressed not to find someone who doesn’t at least know of Captain America and others. However, you’ll find plenty of people scratching their head over Wiseau’s name and who might mistakenly think of Brie Larson’s award winning role in the film “Room.”

“The Disaster Artist” is more or less bonus content for fans of Wiseau’s passion project and cinematic abortion. I’m in that camp and enjoyed Franco’s recreation of particular scenes, along with the behind-the-camera retelling of insufferable moments with Wiseau, as well as the monumentous occasion where Wiseau premiered the six million dollar film that’s considered one of the worst in modern history, if not all time. For those outside that bubble of knowledge, you may find yourself wondering what all the fuss is about. For those in that bubble, you’ll relish and eat up this biographical travesty. 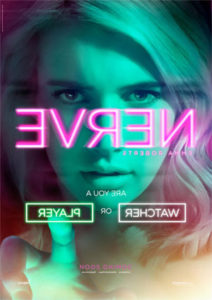 Did kids ever really play “Truth or Dare?” at sleepovers? I certainly didn’t. I grew up in the era where one-on-one conversations and group chat in a circle was replaced by shouting at each over the N64 and trying to decipher the nudity on scrambled HBO channels. So whenever I see the movie trope, especially in horror movies, of a game of “Truth or Dare?” going horribly wrong, I roll my eyes. Who knew a revamp was in order.

Most of the time, “Nerve” is a solid edge of your seat thriller. But at other times “Nerve” seems like a senior citizen’s overreaction and lecture about smartphones, social media and stupid teenage antics. Venus (Roberts) is a timid teenager, who’s known throughout her school as the artistic shutterbug. Her friends are an insipid teenage hacker, Tommy (Miles Heizer) and the school floozy, Sydney (Meade). Most likely one of those groups of friends that met in Kindergarten, grew up together, and hasn’t yet realized they’re bad for each other.

The latest high school craze is the “app”, Nerve. I only say “app” because it’s never fully explained how Nerve actually works. It looks and works like a smartphone app, but also possesses the powers of most Malware, infecting, spreading, and storing all your personal information. In Nerve you can be a watcher or player. The player completes dares and gains followers. The goal is to be the final one to complete the craziest dare. In Nerve, you’re eliminated if you choose not to a dare, snitch, or simply fail at completing your dare.

The clear thing keeping these inept teenagers in Nerve’s snare is the money. Sydney’s dare, which is suitable for the high school tart, is to flash her bare butt at a football game. Easy dare. Easy money. But the dares grow increasingly dangerous and risqué. Venus gets involved after the constant peer pressure and hurtful words of her friends that she never takes risks. While most of the times, I’d call this poor plot structuring, “Nerve” goes to a short, but adequate length to show that Venus is in need of money and in need of a major confidence boost.

“Nerve” follows Venus on her night of dares across New York City. She ends up teaming up with another Nerve player, Ian (Franco) and the two complete dares together. At first it’s light-hearted summer fun at the theater as the two are forced to run out of a high-end Manhattan clothing store in their underwear, but slowly turns into a pulse pounding action sequence the duo navigating a motorcycle at 60 mph blindfolded.

“Nerve” is a sleek techno thriller utilizing America’s current craving for online infamy, naive adolescent sensibilities, and the mob mentality that the Internet has created. If it flops at the box office, “Nerve” is sure to become a cult classic. If it succeeds at the box office, its problems will surely be highlighted. If you begin to get technical about everything, you realize that “Nerve” is in need of some IT support.

In an era where techno babble is becoming common speak and the focus piece of news media, “Nerve” struggles to keep up with some of its more technologically advanced viewers. The movie attempts to name drop things like “dark web” and “Google” in the hopes of glazing over the scriptural plot holes. But it’s fast paced story, neon visuals, Franco and Roberts likability, and thrilling third act keeps you from questioning the structural problems for too long.