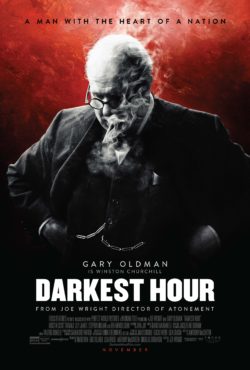 Yes, the holidays do mean goodies on the dining room table. But they also mean goodies at the local multiplex. Here is a list of some of the films we’re looking forward to. Please note that release dates are subject to change at the whim of the studios. Some synopsis information courtesy of our friends at IMDB.

I hope this year we get more presents then lumps of coal.

The latest from the folks at Pixar. Aspiring musician Miguel, confronted with his family’s ancestral ban on music, enters the Land of the Dead to work out the mystery.

Oscar Chances: With over 20 Academy Awards to its name, including six for Best Animated Feature, the chances are good.

During the early days of World War II, the fate of Western Europe hangs on the newly-appointed British Prime Minister Winston Churchill, who must decide whether to negotiate with Hitler, or fight on against incredible odds.

Oscar Chances: Look for Oldman to earn his 2nd nomination.

The backstory to how author Charles Dickens came to write “A Christmas Carol.”

Oscar Chances: Maybe Plummer but I’m thinking this film will get Scrooged.

The film recounts the tragic events of the 1969 car accident involving U.S. Senator Ted Kennedy and a young, female campaign worker who died at the scene. Kennedy left the scene of the accident and didn’t alert authorities for ten hours. I’ve actually driven across that bridge and it wasn’t easy to traverse in the middle of a bright, sunny day. Just saying.

Oscar Chances: Would love to see Clancy Brown get a nod.   PLEASE NOTE THIS FILM HAS BEEN MOVED TO APRIL 2018

“Call Me by Your Name”
Starring: Armie Hammer and Timothee Chalamet
Directed by: Luca Guadagino

In Northern Italy in 1983, 17-year-old Elio begins a relationship with visiting Oliver, his father’s research assistant, with whom he bonds over his emerging sexuality, their Jewish heritage, and the beguiling Italian landscape.

Oscar Chances: Hammer has been getting good festival buzz.

An assassin seeks redemption after being given a second chance at life.

The behind-the-scenes story of the making of the cult film “The Room,” with James Franco playing the film’s star/writer/director/jack-of-all-trades Tommy Wiseau.

Oscar Chances: I personally find James Franco to be a fine filmmaker. If you haven’t seen “In Dubious Battle,” a film from earlier this year, I highly recommend it. It’s easily on my Top 10 List of 2017.

On Coney Island in the 1950s, a lifeguard tells the story of a middle-aged carousel operator and his beleaguered wife.

Oscar Chances: With 24 Academy Award nominations, and four Oscars, you can never count the Woodman out.

A profile of the great playwright Arthur Miller, directed by his daughter.

The three leads play criminals holed up in a warehouse. Or at least that is what I assume from what I can find. There is no synopsis on IMDB!

Surely I’m not the only man in America who had a crush on Tonya Harding? When I woke up one day to find she had married a man named Michael Smith and it WASN’T me I was devastated. Apparently here Tonya wants to win the Olympics and her husband gives her a little help.

Oscar Chances: Worth one just to see Tonya Harding at the Oscars. It would be as memorable as the year Woody Harrelson brought Larry Flynt.

A two-hander action comedy in the vein of “Midnight Run” about an ex-FBI agent (Jones) and an ex-mob lawyer in the witness protection program (Freeman) having to put aside their petty rivalry on the golf course to fend off a mob hit.

An other-worldly fairy tale, set against the backdrop of Cold War era America circa 1962. In the hidden high-security government laboratory where she works, lonely Elisa (Sally Hawkins) is trapped in a life of isolation. Elisa’s life is changed forever when she and a co-worker discover a secret classified experiment.

Oscar Chances: del Toro is one of the great visionaries of our time.

After Ferdinand, a bull with a big heart, is mistaken for a dangerous beast, he is captured and torn from his home. Determined to return to his family, he rallies a misfit team on the ultimate adventure.

The story of renowned mob boss John Gotti and his son.

Episode VIII begins where VII ended, with Rey finally tracking down the elusive Luke Skywalker. Bring your Kleenex as we say goodbye to the great Carrie Fisher and Princess Leia.

Inspired by the imagination of P.T. Barnum, “The Greatest Showman” is an original musical that celebrates the birth of show business and tells of a visionary who rose from nothing to create a spectacle that became a worldwide sensation.

Oscar Chances: Hollywood loves Jackman, who got an Oscar nod the last time he sang on screen.

Four teenagers discover an old video game console and are literally drawn into the game’s jungle setting becoming the adult avatars they chose.

“All the Money in the World”
Starring: Mark Wahlberg, Michelle Williams and Christopher Plummer
Directed by: Ridley Scott

The story of the kidnapping of 16-year-old John Paul Getty III and the desperate attempt by his devoted mother to convince his billionaire grandfather Jean Paul Getty to pay the ransom. This film was already completed with Kevin Spacey playing grandpa Getty. In an unprecedented move, after Spacey’s recent scandals came to light, director Scott re-cast the role with Christopher Plummer and re-shot all of Spacey’s scenes. In six weeks.

Oscar Chances: Ridley Scott should get TWO Oscars if he pulls this off.

Set in a world where mystical creatures live side by side with humans. A human cop is forced to work with an Orc to find a weapon everyone is prepared to kill for.

Oscar Chances: Nope. Sounds too much like “Alien Nation” to me.

A social satire in which a guy realizes he would have a better life if he were to shrink himself.

A homicide detective teams up with a criminal profiler to catch a serial killer whose crimes are inspired by the children’s game Hangman.

A drama about a family set in Calais with the European refugee crisis as the backdrop.

In 1892, a legendary Army captain reluctantly agrees to escort a Cheyenne chief and his family through dangerous territory.

Following their win at the world championship, the now separated Bellas reunite for one last singing competition at an overseas USO tour, but face a group who uses both instruments and voices.

Oscar Chances: Nothing I can imagine.

A cover-up that spanned four U.S. Presidents pushed the country’s first female newspaper publisher and a hard-driving editor to join an unprecedented battle between journalist and government. Inspired by true events.

Oscar Chances: Duh!!! You think? Hanks, Streep and Spielberg share over 40 nominations, with Streep leading the way with 20 of her own.

The true story of Molly Bloom, an Olympic-class skier who ran the world’s most exclusive high-stakes poker game and became an FBI target. This is the Oscar-winning writer Sorkin’s directorial debut.

Set in 1950’s London, Reynolds Woodcock is a renowned dressmaker whose fastidious life is disrupted by a young, strong-willed woman, Alma, who becomes his muse and lover.

Oscar Chances: Again, many. Day-Lewis won one of his three Oscars for Anderson’s “There Will Be Blood.”

“In the Fade”
Starring: Diane Kruger
Directed by: Faith Akin

Katja’s life collapses after the death of her husband and son in a bomb attack. After a time of mourning and injustice, Katja seeks revenge.

A romance sparks between a young actor and a Hollywood leading lady.

Oscar Chances: Bening is SO overdue. Wake up Academy!