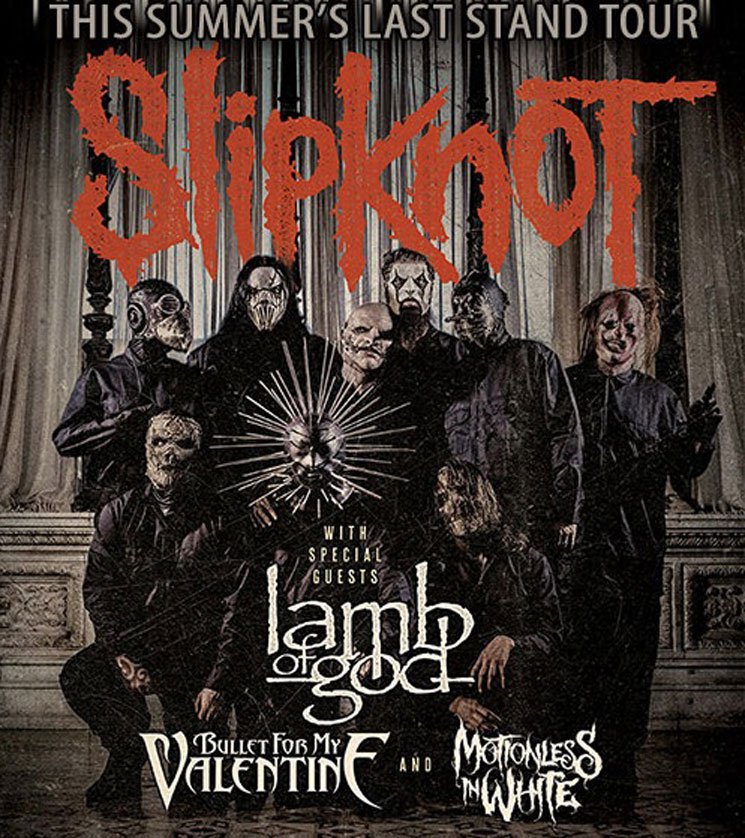 Slipknot’s “Summers Last Stand Tour” made a stop at the Darien Lake Performing Arts Center in Darien Center on July 29th. Along with the masked 9 piece band from Iowa was Lamb of God, Bullet for My Valentine and Motionless in White. With a line up this impressive the energy outside was running high and as the night progressed each act did a great job building on that energy.

Opening up the night was Scranton, Pennsylvania’s very own Motionless in White. The band performed a brief set which included songs off of each of the bands 3 albums. Though fans were still making their way into the venue those who were able to get through the slow moving security lines were treated to a solid performance by the up and coming metal band. Bullet for My Valentine would take the stage next performing a handful of songs off their upcoming album titled “Venom” in between the new tracks were fans favorites such as “Raising Hell” and “Waking the Demon” which both were definite highlights of the bands set.

Virginia metalers Lamb of God were up next and instantly took the night to the next level. Flanked by large video screens and an impressive lighting rig the visual elements of the show seemed much higher than previous shows by the band. Vocalist Randy Blythe stalked the stage like a deranged psycho path stalking his next victim while spewing out thought provoking lyrics. Drummer Chris Adler laid an impressive rhythmic path which guitarists Mark Morton, Will Adler and bassist John Campbell followed beautifully. The band performed a few songs from their recently released “VII: Sturm Und Drang” along with such LOG classics as “Ghostwalking” and “Laid to Rest” with the always prevalent “Redneck” closing out the set. The band sounded and looked better than ever which made for a great show experience. Shortly after the members of Lamb of God left the stage two giant red curtains emblazoned with large black S logos would close of view of the stage. As the anticipation built so did the crowd which seemed to almost double from when the house lights first came on.

Once the lights came back down and Slipknots “XIX” began playing through the PA it was on. Front man Cory Taylor dominated the stage as the band performed a variety of songs ranging from their break out hit “Wait and Bleed” to newer songs such as “The Devil and I” and “Before I Forget”. DJ Sid Wilson provided a bevy of entertainment as he jigged and shook his way around the impressive stage which included a giant devil head. Guitarist Mick Thompson and Jim Root handled the 6 string duties perfectly while new members drum Jay Weinberg and bassist Alessandro Venturella handled a fair share of the rhythmic duties which were highlighted at times by the addition of Shawn “Clown” Crahan and Chris Fehn. The band as a whole sounded better than ever and performed this night at the top of their game.

With a number of dates left on the “Summers Last Stand Tour” you would be doing yourself a tremendous disservice if you don’t catch one of the remaining dates. Each of the four bands leave nothing on the table making the night worthy of the price of admission and then some. 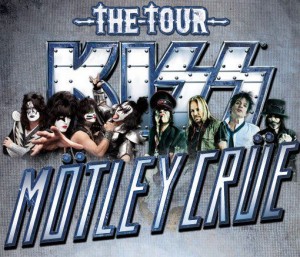 The 2012 Darien Lake concert series came to a thunderous close on Saturday, September 15th as “The Tour” featuring Kiss, Motley Crue and The Treatment performed to a near capacity crowd. As fans of all ages many adorned in Kiss makeup gradually filled the venue the UK hard rock band The Treatment took to the stage and performed songs of their debut release “This Might Hurt”. The band had a really great sound and was full of energy. It’s always great to see up and coming bands on these larger tours come out and really give it their all and The Treatment did just that.

The kings of the sunset strip, Motley Crue were up next and proceeded to make an entrance like no other. Clad in hooded robes, masks and with scantily clad girls on their shoulders members of the band made their way through the crowd before walking up onto the stage. This seemed to really catch the crowd off guard and helped set the stage for the bands performance. Each song in the set was accompanied by pyro, water cannons, arial performers and at one point Tommy Lees very own roller coaster. These things all sound great on paper but at times during the show there seemed to be just too much going on which I felt took something away from the music. Vince Neil’s limited movement due to an injury sustained a few nights before requiring him to wear a walking cast didn’t seem to hurt the bands performance but it surely wasn’t helping. At times the members seemed distant and uninterested in each other. At the start of “Home Sweet Home” several sour notes rang out over the crowd and though the band quickly recovered you could surely tell each member was on a different page.

Kiss closed out the night performing a 13 song greatest hits set dressed in their iconic make up and signature platform boots. Though the set list was made up mostly of classic Kiss gems the band did
perform one new song. “Hell or Hallelujah” the first song to be released off the upcoming album titled “Monster” gave a little bit of fresh air to a set list which has gone relatively unchanged since the 1996 Reunion tour. The band sounded great and despite my extreme dislike for current members wearing past members make up the band looked just as good. Even though I would liked to have seen some different songs make their way in to the set it’s still always good to hear the classics performed live and loud!

With “The Tour” wrapping up just a few remaining dates in September I will be very curious to see what each of the bands have in store for the coming months. It would be great to once again see what each of these bands can do on their own separate headlining tours.