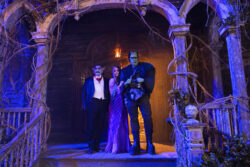 Growing up in the 90s I would watch Nickelodeon. For me and most people I knew at school, we would watch all the cartoons until the clock struck 7 p.m. and then we would keep watching, but it wasn’t cartoons that Nickelodeon would be showing at night. Nick at Nite, the counter kid programming, would air reruns of beloved classic sitcoms like “I Love Lucy,” “The Jeffersons,” “Gilligan’s Island,” and “The Munsters.”It would not surprise me if I ended up watching every single episode of those shows as a kid, and the astounding thing is my memory of all those shows is fond, but gray. The specifics of the shows, like individual plot lines, is fuzzy, but I remember the characters, their house, their catchphrases and all the other things that delighted audiences during their original run and those kids in the 90s that grew up on them. It’s fascinating when adoration for something churns about cinematic abortions like “The Munsters.”

I struggle writing this review because I do like Rob Zombie, as a musician and director, but more as a musician. Just like kids in the 90s my first taste of Zombie was playing “Twisted Metal” games and through that I would end up interested in buying some of his albums and would sometimes play “Twisted Metal” ad nauseum just to hear “Dragula” one more time. I’ve also seen Zombie live at least half a dozen times and I always recommend seeing him to fellow rockers and metalheads because he’s a very theatrical and explosive performer. As for his movies, I have a soft spot for “Devil’s Rejects” and “The Haunted World of El-Superbeasto,” and I don’t necessarily hate him like some horror fans do for rebooting “Halloween.” I can respect his vision and see what it was he envisioned, and appreciate it. That being said, “The Munsters” is still a cinematic abortion.

The 2022 film serves as a prequel, but don’t expect to learn how a Frankenstein’s monster and vampire ended up with a werewolf son. Dr. Wolfgang (Richard Brake) is putting together his perfect creation, but slip-ups along the way create Hermann (Phillips), who has the body of a giant lumbering oaf with the brain of a failed comedian. Hermann garners the attention of Lily (Moon Zombie), despite the objections of her father, the Count (Roebuck). It’s actually not a bad idea for a prequel, but the storytelling problems pop-up early before they become frequently obvious and annoying. While the material is faithful to the original, on the surface, it misses the point entirely. The black and white TV show featuring monsters on the outside, but a loving family on the inside has been rebooted into a 70s cartoon looking universe with characters that feel more like fan fiction bastardizations than they do actual representations of the originals. It brings to mind other failed films that missed the point of the original TV entirely, like “Wild, Wild West” and “Inspector Gadget;” similar cinematic abortions I might add.

The characters, who feel more like caricatures as opposed to living, breathing people monsters, are stuck in the proverbial “old country” for the first hour of the film and we’re never given a reason to care about their lives or the meaningless conflicts that arise. It’s impressive watching Zombie drag the wedding almost into the second hour of the film when we all know that’s the inevitable point that needs to be reached. The first hour of this film could have been whittled down to 20 minutes in capable hands, but instead we’re treated to bad jokes, odd montages, and scenes that just don’t fit, like Hermann being in a punk rock band. All of this adds up to an unenjoyable experience that makes you question every single moment as if you’re being fed a lie.

I hate to fault the acting, but I have to. At a certain point I wonder if Phillips and Moon Zombie recognized they were doing poor performances. They’re both talented, but in this film they’re barely able to move past being one dimensional characters. If you were to ask me about my impression of their attempts at recreating iconic TV show characters, I’d tell you that Phillips needs to sound less prepubescent when delivering Hermann’s lines and that Moon Zombie says “Hermy” so much I began to wonder if she was channeling Ms. Piggy saying “Kermy” more than anything.

I want to tear apart nearly everything I witnessed, but I don’t want to do that because I don’t believe it’s fair. This movie is obviously low budget and when listening to Zombie, you can tell that this vision came from a great place of adoration. That being said, I think it’s fair to ultimately place the blame for this trainwreck of a film at the feet of Zombie. I think he’s still an incredible talent, but it’s clear that “The Munsters” is his rock bottom as a director. The creativity on display, mainly in cameos and set designs, is overshadowed by lapses in creativity, like lumpy dialogue, jokes that feel more like aliens attempting human humor, bizarre misplaced acting and a plot that insults basic human intelligence. Let’s hope this is the last time someone attempts to resurrect a dead piece of entertainment property. I’m now left wondering if this is how all those “Halloween” fans felt back in 2007.