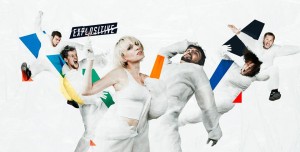 As I imagine many of us do, I dabble in late night encounters with the YouTube wormhole. I start by looking up some silly video of a cat riding a Roomba, or pull up a music video for one of my favorite bands. On September 28th, I was watching a DevilDriver video on the Napalm Records YouTube channel and an image on the side bar caught my eye; some oddly costumed farmer looking fellow screaming into the camera and the band name “Kontrust” with a song titled “Hey DJ!”.

Throwing caution to the wind, I clicked the link and the video started. The aforementioned farmer pulled out a vinyl and spun it on an antique phonograph. A female voice screamed “Don’t play me a punk song!” and a barrage of metal power chords followed. I’ll admit, I’m very selective about female lead singers in metal music, but once Agata Jarosz’ powerful voice hit on the first line of the verse, I was hooked. What followed was a seamless, intricate blend of funk, metal, and industrial music. I was sold. Kontrust had just made its way onto my play list and I hadn’t even made it through the entire song.

The follow up video to my Kontrust introduction was a song called “Sock N Doll.” Extremely unique, the video features a venue filled with sock puppets, and the band represented in the same fashion, but dressed in traditional Austrian garb. A quick yodeling lead in by Agata and then the vocals of Stefan Lichtenberger took over. Mixing elements of Korn, Pink and Buju Banton, this was one of the most beautifully diverse and energizing songs I had ever heard! I couldn’t get enough – so I took my crusade to eBay and secured a copy of Kontrust’s “Secondhand Wonderland.”

Song after song, my interest for this band and its musical prowess grew. I had Secondhand Wonderland playing non-stop in the Camaro, at work and at home. It was an obsession because the music made me feel good. It was the ultimate “Party Metal” album, without the after effects of a hangover. Much to my delight, I found out that there was going to be a follow up to this masterpiece – and extremely soon! “Explositive” is due to be released by Napalm Records on November 7th, 2014. I wanted desperately to get a hold of the band to talk about the successes of “Secondhand Wonderland” and what fans (and new listeners) could expect from the new album. I was fortunate enough to be granted a live Skype session (from Austria!) with three of the band’s members: Agata (vocals), Mike (guitar) and Gregor (bass and synth).

Eric Schmitt: So how was Kontrust formed? As far as where did the members come from and how did you decide on the direction to go in?
Gregor Kutschera: In the beginnings it was a band from the countryside in upper Austria – you may know it from “The Sound of Music” musical. We three, are actually from Vienna. The other guys, they are from Up-Austria. They formed the band, like 10 years, 12 years ago or something. We joined in 2005, mixed Up-Austria with Vienna, the big city, you know? They moved to Vienna to work and to study. They played mostly in a hardcore band, you know, before Agata joined with her clean vocals.
Agata Jarosz: It was really bad (bad-ass) and really {growls}. Then Agata came and said, “I’m sorry, that’s not my way. You have to come with me and go my way.” {laughs}So Kontrust started!.
Mike Wolff: It all started around 2001, then in 2005 the major change was applied. Agata joined and the whole band structure changed – it’s gotta have a little more “pop” factor in there.
GK: Or melody.
MW: Yes, melodies, to go a little bit in the pop music direction. Well, 9 years later, we’re still here and the last 3 albums, Time to Tango, Secondhand Wonderland and Explositive channel what we’ve been doing for those 9 years. Explositive is definitely something to more of the essence to what we are doing; reduced to the maximum if you want.

ES: The mix of musical genres is really successful with the albums, it works. The way you go from pop to metal to reggae. So I wanted to get an idea of what kind of musical influences brought everything together. In particular, personal influences that drove you to mix the genres together.
AJ: There is one band that every one of us was hearing when we were younger – it was Rage; Rage Against the Machine.
GK: Yeah, that’s the band we can all agree on. It’s the only act we can all agree on. {laughs}
AJ: I think the 90’s – we are all kids of the 90’s, so this is our music.
MW: Well, Rage Against the Machine was the only band that we agreed upon, that each of us likes. I mean there is so much other stuff in there that adds to it. From Skunk Anansie to even Iron Maiden. {Laughter} I have to say that! I’m the biggest Iron Maiden fan.
GK: Run to the…… {Laughter}
MW: We’ve got to leave that in the interview! Anyways, I guess it’s just – I don’t know – It’s kinda hard to say. I think of Kontrust basically being something where all of the musical influences we have where we can agree on those things.
GK: Some of us like some songs more than others.
MW: It’s diverse, but I guess that’s what drives us. There’s always so much tension when we’re writing the songs, it doesn’t just happen. You have to convince the others in the band-
GK: It’s fighting, it’s struggling, it’s pain….. And it’s awesome!

ES: As far as the new album, Explositive goes, what were the driving forces behind the tracks that you decided on?  What factored in to actually choosing the tracks to go on the new album?
AJ: Good question.
GK: We did lose some of our best parts (of tracks) along the way because they didn’t fit into songs. In the end, we all took the best the songs that worked. Every part fits perfectly well. It’s hard to say, I just have the feeling we lost some good parts and heavy parts along the way, but that doesn’t matter. The song was the focus.
MW: We write like 120 ideas and lose so much along the way. It’s just because we find something to start the song, then everything else has to fit. In the end we find it doesn’t fit Kontrust, so that song is going to get thrown out. Then we go back into the archive and digging for material, then start putting that (material) together. So basically, it’s all about an idea – is this Kontrust? Or could we sell this, say to Megadeth? {Laughter} When you work together as a band, with us being six people, there’s so much input you have to filter. Then it ends up with ideas that everyone is happy with.

ES: What are the tour plans once the new album is released?
AJ: The dates are in progress. We are planning a tour next year in the Netherlands, Germany and in Europe. This autumn, we will only play in Austria, in every major city. Next summer is festival season, and that’s the most important part (of the year) for us.
GK: So we take a slow start in the winter, then start out in spring and summer for festivals. There are a lot of big festivals in Europe, so we’re looking forward to that.
MW: We’re thinking about coming over the pond (to America), it all depends on how the album is perceived in the States.

ES: Are there any differences (from Secondhand Wonderland) in the new album that you would like to elaborate on?
Mike: Everyone is looking at me! {Laughter}
GK: We will give this to Mike, because he is our Minister of Propaganda. {Laughter}
MW: First of all, this album has been the easiest for us.
AJ: I think that we all like this album more than Secondhand Wonderland. It’s more “back to the roots,” that’s a very big reason why I like the album. Secondhand Wonderland was very over-produced. We wanted to over-produce the album, it was something special and different. (But) it was too much “pling pling”. Explositive is more “in your face”.
MW: It’s more in your face, it’s kind of reduced. All the stuff you hear, there’s almost no added artificial samples or anything, (as) compared to Secondhand Wonderland. It’s us playing, a little bit of synth, which Gregor plays,  and everything else, all the effects, are all natural. The reverb you hear is real. It’s basically this room here.
AJ: We recorded the album in this room (a slow turn of the phone shows me Kontrust’s spacious studio).
MW: The album, we think, is straight forward, in your face, has the party mood and has the feel of “bang your head on something hard and see what happens.” I guess when people who already like Kontrust will like this album a lot because it’s more of essentially what Kontrust is. Less of  the added stuff. And people who don’t know us yet will probably have an easier time to get into us just because the album, at least we think, is really “simple”.

If Explositive is Kontrust’s idea of “simple,” I would be intrigued to hear what “complex” would sound like to them. Napalm Records posted a preview of all of the songs on the new album, which can be heard by clicking HERE, or see above, as well as the first release on the album “Just Propaganda.” The new album sounds just as diverse and intricate as Secondhand Wonderland, but offers more of a raw appeal. Explositive can be pre-ordered through the Napalm Records Webstore as well as Secondhand Wonderland, which this author HIGHLY recommends! I am personally looking forward to November 7th and the release of Explositive, and have high hopes that 2015 will bring this extremely talented, energetic and most of all, friendly band stateside, so that Americans can see what we’ve been missing out on all these years!
Read Complete Article
Filed Under: Interviews, Music Interviews Tagged With: album, austrians, band, crossover, explositive, kontrust, ...
Page 1 of 1