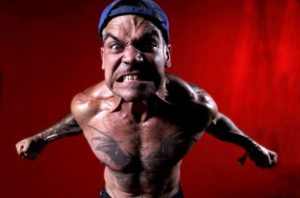 Punk mainstay Harley Flanagan is often recognized as one of the most influential members of the NY hardcore/punk scene of the early 1980’s. His band the Cro-Mags set the early standard for hardcore which is still followed and recognized to this day. Harley recently released his first solo album titled “Cro-Mags” and Media Mikes had the chance to speak with him recently about the album, his trials and tribulations with his former band and also about his upcoming book.

Ryan Albro: At what moment did you decided it was time to release your first solo album?

Harley Flanagan: I had some ideas in my head that I had been working on and at one point I was fortunate enough to have some studio time made available to me so I decided that I was going to use that time to start laying down some demos. From there one thing led to another and it wound up turning into this album.

RA: What was the writing process like working on a solo album versus previous albums?

HF: It was really the same process as I am the guy who came up with riffs. Back in the old days, I would have be recording them on a cassette player or when I was living with Squatch I used to call up Parris’s house and tell him not to pick up the phone so I could hum riffs on his answering machine. He’d learn the riffs and then we’d meet up later and we’d play them together. Now I sit around the house and record them on my phone. Whenever a riff comes I put it down and I work with it. I had a ton of riffs on my phone and when the studio time became available I went in and just waded through everything and picked out a bunch that I thought had an old school type of feel. I wanted to write a bunch of short songs that just come in, punch you in the face and walk right over you. I actually wrote everything believe it or not on an acoustic. I am actually thinking about releasing an acoustic version online just for fun because that’s how this whole album was originally recorded

RA: What made you decide to name the album Cro-Mags, considering the issues you have with the band?

HF: I basically felt like it was time for me to reclaim something that is rightfully mine. All bullshit aside, my hand has always been extended to those guys and even after all the shit went down at Webster Hall and along with everything else, my hand is still extended. The fact of the matter is that so called band is just John and occasionally Matthew. There’s nobody playing in that so-called band that has ever written a Cro-mags song and the Cro-mags have not written a song since I haven’t been involved. They are like a tribute band doing songs and other covers. This new record sounds more like Cro-Mags than anything anybody’s done since. I’m taking back the name. That magic is never going to be recaptured without everyone being involved. I believe that and I know that and that’s why I’m the sentimental fool that’s always fucking extending my hand to these guys, but obviously it doesn’t mean as much to those guys as it does to me. The good that game out of it far outweighs the bad, but unfortunately there has been a lot of bad. For me that whole interruption in 2012 and then putting out this album and really venting my feelings about that moment has been a real positive thing for me because it has helped me exorcise a lot of those demons.

RA: You also have a book coming out can you tell us about that?

HF: As far back as I can remember people have been telling me I should write a book, at least going back to like the 80’s but, I never really wanted to. Despite being told I have some really great stories it’s just never been something I had the desire to do. When I was going through some particularly tough times in my life I started thinking that in case anything happens I do want my side of the story to get out. I already knew that hardcore had made enough of an impact culturally where there would inevitably be books written and bullshit said and bullshit told. I was like I’m going to get my side of this out and I’m going to tell my story, the actual story. If I don’t I’m going to wind up with some asshole telling my life story the way they perceived it or the way they want it told to serve their purpose. I started writing everything down that I could remember going back as far as I could to my early childhood. Over the years of working on it I kept going back and fact checking and, double checking and, confirming facts with my family members. My mom was helpful with that before she passed away. I did a lot or research on everything. I wrote this book with the intention of it being something that people would want to read and them to see what it was like living in that time period through the eyes of a child, through the eyes of someone that was there growing up in it. There has been a lot of books about punk rock but there haven’t been any written by someone who was 10 years old when this happened. It goes through my whole life. It starts off with the day that Webster Hall went down and then right when that started to erupt it goes back to my early childhood and it retraces everything through as much as I could. Obviously I had to cut a lot of shit out or it would have been like a 10,000 page book but I wound up getting an editor and after everything was written and really narrowed down to the most powerful stuff. People can get a taste of what will be in the book if they check out www.harleyflanagan.com

RA: Lastly, What are your plans for touring in support of the new album?

HF: I have looked into doing some shows and some touring but so far the right show hasn’t come up. I work 6 days a week, I love my job, I love the people I work with and I love being home with my wife and spending as much time with my kids as I can. For me to get out there and tour it has to be the right shows. When the book comes out I will definitely be doing a book tour and, the idea is I would like to try and book shows that coincide with that so I can perhaps do a book thing during the day and maybe a show that same evening in the same city. That way you can kill two birds with one stone while having fun.