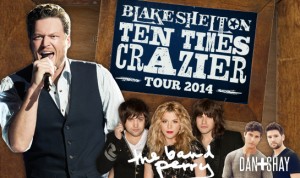 Blake Shelton is no question one of the best thing that country music has going for it in recent years. His music is fun, careless and if you don’t like it you can kiss my country music loving ass. The “Ten Times Crazier Tour 2014” is not your regular concert. It features Blake Shelton along with The Band Perry, Dan + Shay & Neal McCoy (who not plays once but three times).  This is a real party. The event started at 6:45pm and went all the way to just past 11pm. Now if you ask me that is one hell of a concert and these fans are really getting their money worth.

The night kicked off with Neal McCoy, who only took stage for 15 minutes and sang some fun cover songs…but don’t worry we didn’t see the last of him and his band. Next up was Dan + Shay, who I did not get to see due to being backstage  meeting up with Blake Shelton! That’s right baby meet and greet! He is one cool (and tall) dude! What I did hear though, there were really stealing the crowd and getting them warmed up. Neal McCoy came out again after that for another 15 minutes before The Band Perry really stole the show.

I have never seen The Band Perry live and not really a huge mega fan. I know (and like) a bunch of their songs but not really a number #1. Well after this performance, I am now a number #1 fan! The Band Perry took the stage and literally tore the roof off the Amway Center. Kimberly Perry is such an amazing performer and has such presence. She is also quite theatrical and dramatic, which really adds to the performance. Of course they song their classics like If I Die Young and Chainsaw, which really drove the crowd into an all out singing fest.

After The Band Perry, Mr. McCoy took the stage once more again singing some amazing classics and keeping the crowd ready when the stage was being set for the main attraction, Blake Shelton. Having met the man, a mere minutes before, it was surreal when he hit the stage and he was belting out his hits literally six rows from my seat (thanks to his management team for the outstanding seats BTW).  What I love about Shelton is that it just seems so effortless for him and yet at the same time, the guy seems like an average Joe who at points honestly seems nervous. He is just a great performer and keeps his audiences attention from the moment he comes. He is funny and also a great storyteller.

The top selling/Grammy winning country singing artist played his hits like “Kiss My Country Ass”,  “Mine Would Be You”, “Some Beach”, “Hillbilly Bone”, “Sure Be Cool If You Did” and “My Eyes”. Also in one of the coolest things that I have ever been a part of, Blake actually recorded the video to his latest single “Neon Light”, which is set to be released on his new album “Bringing Back the Sunshine”, due out September 30th. It was a blast to get to be a part of such an amazing event.

As the night grew later, Shelton went all Acoustic on us and came up to the front of the stage solo only with a guitar and really poured his out with tracks like “Austin”, “Drink On It” and one of my favorites, “Home”, which is of course a Michael Bublé cover. But the mood didn’t end on a quite not as he closed out the night with his biggest hits “Honey Bee” and “Boys ‘Round Here” and brought in the night with fireworks. I do not think that there was one person not singing or screaming those lyrics.

This was no question of the most fun that I have had at a concert in recent years. When I left the Amway Center, my cheeks were killing me and mine and my wife’s voices were shot due to singing for hours straight. I hope Blake and his team realized that Florida has its share of country fans and knows how to tear it up with the best of them! Till next time Mr. Shelton! Thanks for a great night, you sure know how to throw a great party!

Blake Shelton Setlist:
All About Tonight
The More I Drink
She Wouldn’t Be Gone
Doin’ What She Likes
Kiss My Country Ass
Mine Would Be You
Nobody But Me
Some Beach
Ol’ Red (George Jones cover)
Who Are You When I’m Not Looking
Hillbilly Bone
Sure Be Cool If You Did
Neon Light
My Eyes
Over You
(Acoustic)
Austin
(Acoustic)
Drink On It
Home (Michael Bublé cover)
Honey Bee
Boys ‘Round Here
Encore:
Footloose (Kenny Loggins cover)
God Gave Me You