Wes Craven, the creator of both the “Nightmare on Elm Street” and “Scream” film series, passed away today at his home after a battle with brain cancer. He was 76.

After briefly teaching English at Westminster College, he decided to pursue a career in the film industry, beginning as a sound editor in New York City. He also began working in a film warehouse along-side a former filmmaker turned musician named Harry Chapin. Chapin had been approached by a dentist-friend of the warehouse owner who had $50,000 to invest in a horror film. Chapin, who had earned an Oscar-nomination for his 1968 documentary, “Champions,” was no longer interested in filmmaking so he recommended his co-worker, Wes, for the job. The film became 1972’s “Last House on the Left,” which was the first of many horror films written and directed by Craven. Craven also worked in the early world of pornography, mostly writing and editing films. It is rumored that, under the pseudonym “Abe Snake,” he directed the X-rated film called “The Firecracker Woman,” in which a young Craven also has a small role (clothed).

In 1977 he wrote and directed the brutal “The Hills Have Eyes,” following that up with “Deadly Blessing,” “Swamp Thing” and “The Hills Have Eyes Part II.” In 1984 he wrote and directed a film that would change horror movies forever, “A Nightmare on Elm Street.” I was just getting into the theatre business when the film opened and I often filled in at the Town Theatre in Baltimore, which had the honor of being the theatre with the highest grosses during “Elm Street’s’ run. He finished the 80’s out by directing several episodes of “The Twilight Zone” television show and the films “The Serpent and the Rainbow” and “Shocker.”

He began the 90’s with “The People Under the Stairs” then turned to horror/comedy by directing Eddie Murphy in “Vampire in Brooklyn.” In 1996 he hit the horror jackpot again with the film “Scream.” A tongue in cheek look at the various tropes of horror films, the film went on to gross over $100 million and spawn three sequels. Proving he could do more than horror, he directed Meryl Streep to an Oscar nomination in the film “Music of the Heart.” He was currently serving as an Executive Producer on the upcoming “Scream” television show.

On a personal note, I’d like to mention that it was Wes Craven, who I had the good fortune to meet, that inspired me to write a screenplay about the life of one of my personal heroes, Harry Chapin. “If you ever sell it I’ll direct it,” he told me. Sadly, he’ll never have the chance.

Mr. Craven is survived by his third wife, Iya, and his children, Jonathan and Jessica. Jessica’s step-father is Tom Chapin, Harry’s brother. 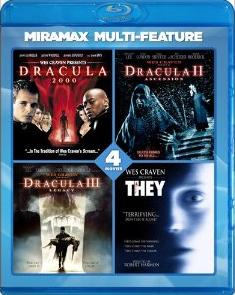 The main draw for me to this release was the three “Dracula” films, all presented by Wes Craven. “Dracula 2000″ was a really clever and fun film. The two “Dracula” sequels are decent but have a direct-to-video feel, still the three together are worth the purchase alone. I was never a huge fan of “They” but it is also a decent bonus to this release. Wes Craven’s name personally to me does not bare much weight recently I feel that he has really lost his street cred…I mean have you see “Scream 4″? Nonetheless, they films are worth purchasing for horror fans, especially for the low cost.

“Dracula 2000” takes the tale of Dracula into the 21 century where a team of techno-savvy thieves break into a vault they find a crypt unopened for 100 years. Dracula is unleashed and wreaks havoc. “Dracula II: Ascension” follows a group of medical students who discover the body of the Dracula and will wish that they hadn’t. “Dracula III: Legacy” follows vampire hunters Father Uffizi and Luke as they follow Dracula back to Eastern Europe they aim to end his reign again. “They” follows a student who experienced night terrors only to find out that the monsters in their closets are real and they are coming for her.

The Blu-ray presentation of these discs are not the greatest like most Echo Bridge multi-feature releases but they are honestly worth it to have these films on Blu-ray. The first two “Dracula” films are the best two films but also the worst presented here. They both included 1080i transfers and are only equipped with Dolby Stereo 2.0 tracks. This is a bit disappointing as they have full 5.1-channel versions on the DVDs. Though “Dracula III” & “They” both are presented in 1080p and both have 5.1 surround tracks. I wish that Echo Bridge will focus on unifying their releases and include 1080p and 5.1 sound on all films in these sets. Fans of these films, will still be happy for these HD upgrades.