The indie dramedy genre is generally characterized by it’s portrayal of a dysfunctional family, a haphazard group of friends or a bumbling arrangement of strangers in a scenario where there are multiple revelations, declarations and betrayals, soaked in sappy sentimentality and feel-good moments. Very rarely do the movies give audiences a cathartic release or genuinely move our hearts and soul. However, a few do. “Little Miss Sunshine” comes to mind. But most of these films are a dime a dozen, floundering on their own predictability or offering audiences brief, but humorous escapism. “Table 19” does both.

“Table 19” is named after the wedding table where the people who got an invitation, but should have known better and declined the offer, showed up. It’s the final table to be set and have it’s food delivered at the wedding. It’s brushed to the corner of the banquet hall, near the bathrooms and out of sight. The table 19 occupants are equally as random as their connection to the bride or groom. It almost makes you wonder if the nicer thing would have been to just never have sent an invitation at all.

There’s the heart-broken, former best friend of the bride and ex-maid of honor, Eloise (Kendrick). To her left is the Kepps, Bina (Kudrow) and Jerry (Robinson), whose marriage is struggling so bad they don’t even bother keeping up the appearance of smiling happiness or tolerable hatred anymore. To Eloise’s right is the adolescent Rezno (Tony Revolori), who’s only at the wedding because his mom didn’t think he had a chance of scoring a date or dance at his junior prom. Rounding out the table is ex-convict, Walter (Stephen Merchant) and a nanny from the past, Jo (June Squibb).

There’s a lot of emotion and backstory to unpack, but “Table 19” reveals a lot of it without sacrificing a handful of entertaining moments. Most of it unfolds naturally, in a manner that’s logical to the scant plot. Jerry loves mystery novels and wonders why such an oddball group would be stuck at the worst table. Eloise provides the answer, while withholding some secrets as to why she, a jilted lover, would bother showing up to the wedding her ex-boyfriend is at and why the couple even broke up in the first place.

Kendrick, as usual, is bubbly, likable and cute. It’d be interesting to see if she’d be able to pull off the villain in a movie someday. Merchant’s awkwardness as Walter provides some much needed comic relief that isn’t Jerry’s sardonic bluntness about the whole situation. The audience will surely relate with a lot of the characters on screen, but only because their plights are so generic. Despite my complaints about its reliance on indie tropes, I found myself enjoying the funny quirks each character carried as well as how the story resolved. The conclusion is the one thing I couldn’t quite predict.

The movie is written by the Duplass brothers, who’ve worked on a lot of indie dramedies, some bad and some well-written. What’s missing from their brand is the uncomfortable comedy that should be populating their envisioned settings. That’s where director Jeffrey Blitz comes in, whose work includes episodes of “The Office.” Together, the writers and director, create a passable movie, skirting on secondhand embarrassment, but nothing memorable or outstanding.

“Table 19” has some heartfelt performances and some jaunty comedic moments, but too often it finds itself lost in its own plotting and backstory. Sometimes it’s difficult to tell if we’re supposed to enjoy the characters company because they’re emotionally disfigured buffoons or sympathetic damaged souls. Even at 87 minutes, it feels like it takes too long to tell a simple story. At times its sappy like any love story culminating at a wedding, but sometimes you feel like you’ve shown up to a wedding you don’t want to be at. 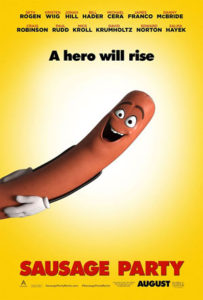