As a teenager there were two film trailers shown on television that not only scared the hell out of me, but that I still remember vividly to this day.  One was for the film “Magic,” featuring Anthony Hopkins, Ann-Margaret and a dummy named Fats, who would look into the camera and recite, “Hocus, pocus…we take her to bed.  “Magic” is fun.  YOU’RE DEAD!”  The other one began like this:  “There’s only one thing wrong with the Davis baby.  IT’S ALIVE!”

“King Cohen” is an excellent documentary about filmmaker Larry Cohen, whose films, including “It’s Alive!,” “The Stuff”  and “Q” have a devoted following of fans, including such successful directors as J.J Abrams, John Landis and Martin Scorcese.  All three of these men face the camera and expound on the effect Cohen has had on their own projects.  Abrams recalls a time when he was fifteen years old and running into Cohen on a Los Angeles street.  Cohen was lost and the young man pointed him in the right direction.  Decades later, when the two meet again, Cohen remembers Abrams as the kid who gave him directions.

Cohen grew up like many people in show business…wanting to be in show business.  He broke into television in the 1960s, writing for such shows as “Surfside Six,” “The Fugitive” and “Branded.”  Occasionally Cohen was ahead of the times.  A script he wrote for the show “Naked City” was turned down for being to “rough” for the times.  30 years later, Cohen sold the script to “N.Y.P.D. Blue.”

The film looks at the various films in Cohen’s career, with Cohen and others talking about his filmmaking process.  Cohen was often a true guerilla filmmaker, often putting a cameraman up on a fire escape and filming the passerby’s reactions.  For one film, he required a parade of 5,000 New York City.  To get the shot, he dressed Andy Kaufman up as a cop and had him join the rest of the boys in blue in marching across the city.  While filming a film dealing with J. Edgar Hoover in Washington D.C., Cohen learns the address where the former F.B.I. director lived and films a few scenes on the front lawn.

This film covers pretty much Cohen’s filmography, focusing more on the most popular films, especially “Q” and “The Stuff.”  Interviews with fellow filmmakers, crew members and actors such as Michael Moriarty and Eric Roberts gives the viewer every possible look at Cohen’s process.

All in all, “King Cohen” is one of the best documentaries about Hollywood to come down the pike in a very long time.  Now, if I could only get that Davis baby out of my head! 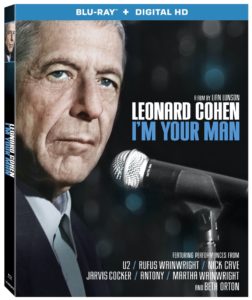 “Leonard Cohen: I’m Your Man” is a film that is over 10 years old but this is the first time that the documentary focusing on the legendary singer-songwriter, Leonard Cohen, and features performances of his songs by those musicians he has influenced is being released on Blu-ray. If you are a Leonard Cohen fan, I mean who isn’t, and have never owned this film, this is a good time to honor this very talent individual and his music. Crazy to thing that he is gone from us but at least we have films like this celebrating him.

Narrated by Cohen himself, the film features performances by artists like U2, Rufus Wainwright, Nick Cave, Jarvis Cocker, Antony, Martha Wainwright and Beth Orton and others singing Cohen’s songs. Here is the official premise: Sure to please both die-hard Cohen fans and the newly initiated, this film is full of captivating music and offers an intimate portrait of a truly singular artist — poet, songwriter, cultural icon.

Lionsgate is releasing this film as a combo pack with a Blu-ray and Digital HD copy included. There are some solid bonus features included on this Blu-ray. There are exclusive performances not seen in the movie by Martha Wainwright, Perla Batalla, The Handsome Family, and Teddy Thompson that are worth checking out for sure. There is also “A Conversation with Leonard Cohen” and an audio commentary with the director, Lian Lunson, included. Worth checking out if you are a hardcore fan. 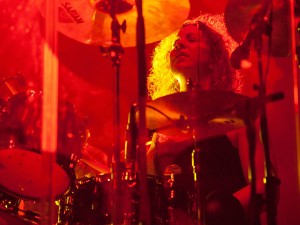 MG: Pink Floyd was known for their elaborate stage shows that, over time, evolved into massive-scale light shows and stage sets that were really ideal for large venues like outdoor stadiums. In terms of The Machine’s live performance, how important is the visual part of the

MG: What are your personal favorites? And what is the one song that everybody in the band collectively enjoys playing most?
TC: Personally, I love playing “Shine On You Crazy Diamond”, the whole thing – all parts. I love it. We have probably played it 2500 times, easily. Every time it is on the set list, I am still excited to play it. The crowd always goes crazy for “Comfortably Numb” every time. We go crazy for anything on “Animals”. People that love Pink Floyd love it all. 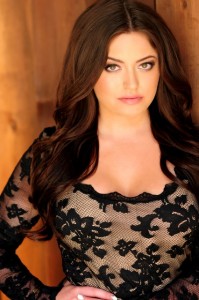 Keny Cohen is the owner and designer of KATRIEL. Her designs have been worn by many celebrities including Marina Sirtis from “Star Trek: The Next Generation” and Kendall Jenner from “Keeping Up with the Kardashians”. Keny took out some time to chat with Media Mikes about fashion and design.

Mike Gencarelli: Tell us about how you started “Katriel Designs”?
Keny Cohen: I started Katriel over summer as more of a hobby and something that I had always enjoyed doing. Little by little the line began to develop and more and more people started showing interest making my dreams of being a fashion designer a reality.

MG: How did it feel to have someone like Kendall Jenner wear your designs during Fashion’s Night Out in LA and support your collection?
KC: It felt amazing! knowing that someone that is so hot right now in fashion want to wear your creations feels like a huge validation in the industy.

MG: In an every changing design world, how do you stay on stop of fashion?
KC: As Yves Saint Laurent said, “fashions fade, style is eternal.” I completely agree with him and I don’t feel like I am someone who follows trends. Although i like to add things that keep my designs fresh and modern, overall I stick with shapes and styles that have lasted through trends and will always be in demand. These are the designs that a woman can keep in her closet forever and never feel like it has become outdated.

MG: What do you have planned next for your line?
KC: Spring 2013! http://www.KatrielDesigns.com