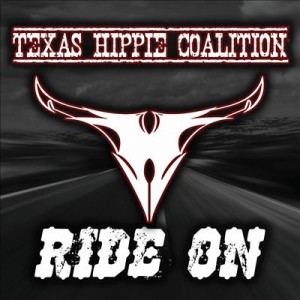 The southern heavy metal band Texas Hippie Coalition are set to release their fourth studio album titled “Ride On” in mid October of this year and are currently out on tour as part of this summer’s Rockstar Energy Drink Mayhem Festival. Media Mikes was able to catch up with the leather vested 4 piece backstage in Scranton, PA recently to discuss the bands upcoming album and the bands progression since their debut release in 2008

Shawn Meas: What can you tell us about the bands upcoming album?
Texas Hippie Coalition: It’s going to be bad ass! We went back to more of our roots on this album and it’s going to be really hard hitting. We went and worked with Skid Mills at the Sound Kitchen and it turned out really well. We are anxious to hear what everyone thinks. We definitely went back to the format of the first record while spending more money. (Laughs)

SM: What type of process do you guys take when starting to record a new album?
THC: We start off by drinking a little moonshine and smoking a little weed. Then we cuss a little bit and things start to work. (Laugh) Cord Pool and I (Big Dad Ritch) are the only guys in the band who can really do math so song structure is pretty easy to come out. (Laughs) I think if we really used any true written format that it was the same every time we wouldn’t have as good of a creative flow as we did. Things are never the just as long we are all in good spirits and have positive energy around us we can write good tunes together. This time we flipped things and worked on the album early in the morning as opposed to late at night because you could never get all of us in the same room at the same time when it comes to working at night. (Laughs)

SM: How do you feel the band’s sound has evolved from your debut album “Peacemaker” to your upcoming release “Ride On”?
THC: I think we have evolved as players. With the new record we certainly tapped into our roots but we are all better players these days. With this band you get what you came for. We try and keep things real and carry out that theme from album to album.

SM: The band has gone through a number of lineup changes to get to where it is now. What do you guys feel each of the new members bring to the band?
THC: This is actually Timmy Braun’s second album with us. He left for awhile to do some side projects that he has and now he back. We are happy to have him back 100% now. Cord has actually been with us since the release of “Peacemaker” however he joined just after we finished recording that album. We have a pretty good team of guys and we are all having a lot of fun. Cord does seem to be everyone’s favorite though and he has said that if he was ever fired he would still show up anyways. (Laughs) Getting out here is like a bull ride with the music business being the bull. It can take a lot out of you and all four of us can take it while some of our previous members couldn’t stay on for the full 8 seconds. This crew is going to be there at the end to get our buckle!

SM: What are the bands plans for the rest of 2014?
THC: The first single off the new album just got released and is titled “Monster and Me”. The full album titled “Ride On” comes out October 7th and we have a lot of stuff going on leading up to that release date. We are going to be making stops at Gas Monkey Garage in Texas and also playing at this year’s Ride for Dime. Once this album comes out we are going to be going through some tires! There are still a lot of people who aren’t familiar with us so we want to get out there and try to get in to as many homes as possible.