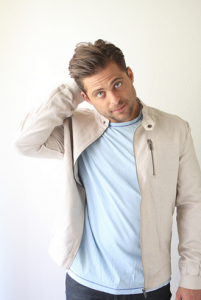 I’m sure it sounded easy for Joseph Russo. Cast in his first major feature film role, the actor portrays a name familiar to movie fans all over the world: Joe Pesci. That’s right, long before he was asking how funny we thought he was (and winning an Oscar to boot), Joe Pesci was a New Jersey boy who dreamed of being a singer (he actually released an album in 1968, “Little Joe Sure Can Sing,” billed as “Joe Ritchie.”

Joey Russo has worked a lot since his debut in 2010, appearing in such television shows as “Bones,” “How I Met Your Mother” and “Parks and Recreation.” He even has a little “Jersey” on his resume’, starring in 2012’s television film “Jersey Shore Shark Attack.” This week he opens in “Jersey Boys,” director Clint Eastwood’s film version of the Tony-award winning Broadway hit. While promoting the film Russo sat down with me and talked about…..

Mike Smith: How did you get involved in “Jersey Boys?”
Joseph Russo: I got a phone call from my manager saying they were looking for an actor to play a young Joe Pesci. I went in and read for the casting director. Then I started to hear that I was on Clint’s short list…then I was on top of his short list….then I was his choice….and I found out a few weeks later that the part was actually mine.

MS: Did you know before you went in to read for the part that Joe Pesci had a musical background?
JR: Once I got the audition I did some research because I had no clue how he was attached to this story. Once I got word that I was seriously being considered for the role I really took the opportunity to piece together a time-line of his life from then until now to really understand how he was a part of that group.

MS: Playing a real-life person, especially someone as well known as Joe Pesci….did you have to reign in your performance at all so that you weren’t doing a caricature? I did notice in one scene you ask “Funny how?” about something and then in another you do a “ok, ok, ok” riff.
JR: I’m so glad you picked up on that. My main thing was that I didn’t want to make him a caricature. That was my goal when I went in to audition. Should I change my voice or not? I didn’t see the Broadway musical because I wanted to create something that was totally my own. I wanted to make him a real guy and at the same time earn the right to play a character like Joe Pesci. What I wanted to do was sprinkle a little Pesci-isms in each of my scenes. Show a little “Casino.” Show a little “Goodfellas.” Show a little Leo Getz (the “Lethal Weapon” series). I wanted to find a way to portray Joe Pesci from age 16 to 26. Because really, the first time the public saw him in “Raging Bull” he was close to 40. So I came up with the idea that everything Joe Pesci has done as an actor in his later life was drawn from something that was inside him when he was younger. Maybe at one time he did say “ok, ok, ok.” Maybe he did ask “I’m funny how.” I wanted to pay homage to a real guy. That was my main focus…paying homage.

MS: Once you got the role were you able to seek Joe Pesci out and maybe get some insight into his life and experiences back then?
JR: Once I got the role I immediately tried to get in touch with him. Unfortunately I wasn’t able to. My next avenue was to call up Tommy Devito. (NOTE: Devito was one of the founding members of the Four Seasons and, according to “Jersey Boys,” now works for Joe Pesci. Ironically, Tommy Devito is also the name of the character that Pesci plays in “Goodfellas”). I talked to Tommy and he gave me a lot of insight into how Joe was back then. He was a clown, always joking around and making everybody laugh. I also worked hand in hand with my acting coach and mentor, Jocelyn Jones, and she really, really helped walk my way through finding out who this guy was in this time period….what was going on in society during this time period…and coming up with my own guy based on that. It was really great. Jocelyn was phenomenal in helping to walk me through that.

MS: Did Clint give you a lot of lee-way with your performance?
JR: Yes, that was the great thing about it. I really didn’t know what to expect. I felt that I had won the right to do this role. I had done all of the prep work. The hours and hours of research, prep work and rehearsal. I knew I had won this right but then again, when I showed up on set, I was a little nervous because I didn’t know if he would let me play it as I wanted to play it. And he did. More so, really. He really let me take the role and make it my own. Even the day when I said “Funny, how?” I just threw that in there. We were rehearsing the scene and I thought how great it would be if Clint started laughing because we came up with that. We were shooting the master shot for the scene and I said “Funny how?” and the script supervisor said “I don’t see where that is in the script.” The camera operator told him “you’re not gonna find it in the script.” We all look at Clint and he smiles and says, “that’s genius!” He let us know we could run with our performances. If he felt something wasn’t right he would tell us. It was a great collaboration on set. It was nice to have that freedom. 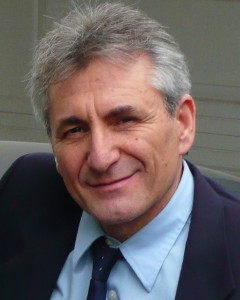 Born in Italy, Lou Volpe moved to America with his family when he was still a young boy. He made his feature film debut in 1987 and has worked frequently in both film and television since then. An accomplished filmmaker in his own right, Volpe has written and directed two feature films: “Divorced White Male” and “Every Secret Thing.” This week he will be seen as Anthony Castelluccio, the father of singer Frankie Valli, in Clint Eastwood’s film version of the Tony-award winning Broadway hit “Jersey Boys.” While promoting the film Mr. Volpe took the time to talk with me about his role in the film, his work and sharing a joke with his director.

Mike Smith: How did you come to be cast in “Jersey Boys.”
Lou Volpe: I auditioned (laughs). Me and several other guys. A few weeks later my agent called me and told me I had the part.

MS: Wow! That’s an easy story!
LV: (laughs) It’s not usually like that. But when I go to audition I try to do the best that I can do and this time I did all right.

MS: Were you able to speak at all with Frankie Valli about his father? Maybe try to pick up some little quirks or qualities of his?
LV: No. Unfortunately Frankie wasn’t on set during the time I did my scenes. I did do my own research…I looked into some of Frankie’s biographies and found out the kind of man his father was…what he did for a living (he was a barber)…that kind of stuff.

MS: You’re also a filmmaker. How does Clint run his set in comparison to yourself or other directors you’ve worked for?
LV: Clint was great. He’s really a very nice guy and really easy to work with….work for. He pretty much lets you do your own thing. He may give you a few suggestions but mostly he lets you do your own thing. He’s very easy to work with. Most of the time he doesn’t even call “action.” He just says, “OK, go ahead.” We had fun. When I was on the set, because he knew I spoke Italian and he had, of course, done many films with Sergio Leone’, instead of calling “action” he would call “Actione’” in Italian. Of course then he’d crack up…then I’d crack up. He’s really a nice, funny guy.

MS: As I mentioned earlier, you’re also a filmmaker…you’ve written and directed a couple of feature films yourself. Do you have anything coming up?
LV: I’ve just written a pilot that is getting some interest. And I’ve just auditioned for a film…it’s the lead role…that I hope will come through