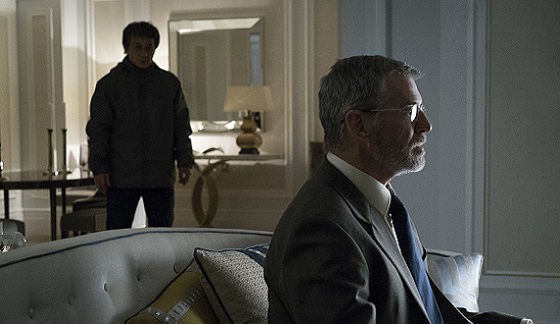 A man picks his young teenage daughter up from school. He notices her sharing a glance with a boy and asks when he will get to meet him. She blushes. He drives her to a popular London dress shop to pick out a prom gown and urges her to be careful as she crosses the street. Sadly, all of his love can’t prevent the bomb that is about to kill her from going off.

An edge-of-the-seat thriller full of twist and turns, “The Foreigner” is a welcome return to the screen for the great Jackie Chan, whose grieving father Quan will not stop until he discovers who planted the deadly explosive. The bombing is claimed by a group associating itself with the IRA, which causes much tension between the British and Irish governments. It is left to Liam Hennessy (Brosnan, given that rare occasion to use his real-life brogue), an influential Irish politician, to get to the bottom of what is going on before things get bloodier. Unfortunately for him, and the police, Quan is a man with a past full of surprises.

Not counting voice work in animated features, it’s been almost a decade since I’ve seen Jackie Chan on the big screen and I’m happy to report that, even at age 63, the man can still kick some serious ass! He also shows a much larger range as an actor here, portraying a father who has basically lost his entire family violently. This is not the clowning man from the “Rush Hour” films. This is a man whose grief and need for revenge seem, at times, to be all that is keeping him alive.

The action here, both with and without Chan, is outstandingly staged, with much credit needing to go to director Campbell, who also helmed Brosnan’s debut as James Bond in “Goldeneye” as well as Daniel Craig’s amazing Bond reboot “Casino Royale.” The film is also driven along by an amazing musical score by Cliff Martinez. The music not only helps deliver the story on-screen but is very reminiscent of the great film scores (“Sorcerer,” “Thief”) by the German band Tangerine Dream.