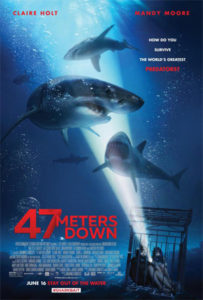 If you’ve EVER read any of my work over a short period of time you probably know that my favorite film of all time, bar none, is “Jaws.” A great film with so many different layers that people often look past everything but the shark. So when I see in a television commercial that a film critic has called “47 Meters Down” “…the best shark movie since JAWS,” I have to shake my head. First off, if all “Jaws” is to you is a SHARK movie…you shouldn’t be reviewing films. The shark is only part of the film. That would be like me calling the last “Pirates of the Caribbean” film, “…the best movie about people on a boat since JAWS.” That being said, “47 Meters Down” is not too bad.

We meet Lisa (Moore) and her sister, Kate (Holt) as they arrive in beautiful, sunny Mexico for a planned vacation. While Kate is bubbly and ready for adventure, Lisa is just the opposite. She finally confesses that her boyfriend has left her and she’s unsure how to handle the rejection. Unfazed, Kate convinces Lisa to head out to the clubs, where they meet two young men. Soon the foursome agree to meet up at the local dock to go out in the ocean and observe sharks while protected by a steel cage. Though she has never scuba dived before, Lisa fakes her way past the boat’s captain (Modine) and soon the two find themselves dangling over the side. As they are lowered into the water they find themselves surrounded by a couple of good sized Great White Sharks. Luckily the cable holding the cage has been checked and inspected for quality and strength. Right?

A Nyctophobian Thriller (let’s see them use THAT in an ad…it means “fear of the dark”), “47 Meters Down is blessed with mostly solid performances and very impressive CGI effects that gives the viewer a pretty good idea what it must be like to be 150 feet underwater surrounded by sharks. Big ones, though, sadly, not the 21 to 28 footers that Skipper Modine swears he constantly sees on his adventures. Which is pretty damn good, considering the largest one ever on record has been right along 20 feet long. By comparison, the shark in JAWS was 25 feet long.

The performances are pretty strong, especially from the two actresses. They help build the tension long after the audience should have been bored. One complaint is with New England-born actor Chris Johnson, who plays Modine’s assistant, Javier. Mr. Johnson must have watched a lot of “Chico and the Man” growing up because, like the late, great Freddie Prinze, he pronounces certain words with a hard CH sound, i.e. “Here comes a CHark!”

Shark wise the film is well done. The computer sharks move smoothly and there is no “super-shark” that shows up like in last summer’s disappointing “The Shallows.” Credit director Roberts for keeping the action going, making up for an almost disappointing ending.