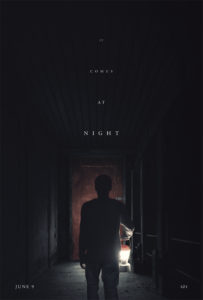 There are a few things that always seem to get lost in the shuffle when an apocalyptic end of the world movie is created; paranoia, hopelessness and brutally honest human emotion. Most of the time in this genre, we’re meant to jump in our seats, watch a subtle reflection of the current political climate or enjoy watching Earth devolve into a sadist’s playground. “It Comes at Night” appears to start out with one of those intentions, but as it unwinds; the movie captures the very essence of humanity’s last gasp and struggling with death.

Paul (Edgerton) keeps his at his side, having them abide by a strict set of rules. The home, deeply entrenched in the woods, is boarded up and only has one entrance/exit, two locked doors, which Paul has the only key to. Paul struggles in silence to understand his son, Travis (Kelvin Harrison), who has just witnessed his grandfather succumb to the disease that is infesting the world around them. It takes effect within 24 hours, causing the body to develop talon like boils, its host to puke ink-like blood and turn eyeballs into tar pits.

“It Comes at Night” actually begins with the arduous task of putting grandpa out of his misery. Paul has Travis come along, despite his mom questioning whether or not Travis would be ready to watch the tragic deed. As Paul takes grandpa out into the woods, digs a shallow grave, and shoots him, Travis watches in confused silence. Certainly, going through puberty is compounded by watching a loved one slowly morph into some zombie movie monster.

They don’t have long to sulk because a strange man breaks into the home, scrounging for food and water. After an extensive interrogation process by Paul, the family learns that the man, Will (Abbott), is in desperate need of assistance. His wife and child are in a different home, waiting for him to return with any signs of hope. Paul agrees to help and welcomes the family into the home, and while things may be peaceful at first, things slowly unravel.

There isn’t a lot of small-talk or meaningful conversation between characters in “It Comes at Night.” On one hand, it makes sense because there’s no reason that the people in this scenario would be regurgitating the tragic details of what they already know. So very little is learned about the actual happenings outside the world and what kind of pandemic is eating away at the Earth. On the other hand, we don’t get a sense of what characters are truly thinking since they appear to be more obsessed about what the other is plotting or contemplating. The only inner workings we get a glimpse of our Travis’ adolescent mind.

It’s clear through many of Travis’ nightmares, that the death of his grandpa, sexual frustration brought on by puberty and paranoia are creating a lethal mental cocktail. Anytime a problem arises with Will and his clan, Travis is reminded by his parents about how family comes before everyone else. Since the movie spends so much time with Travis, it creates disconnect from nearly everyone else, which can be frustrating at first, but sets up for an intense final act.

There’s no traditional resolution to “It Comes at Night,” which is both a blessing and a curse. It gives the viewer a lot to ponder and discuss, but it also leaves you with no profound message to chew on. It’s unique in its pragmatic presentation of what happens when human beings are left to their own isolationism and the overwhelming distrust that will certainly envelop society during end times. But the biggest takeaway is that we’re all afraid of dying and losing those closest to us. There’s no political or social commentary away to take from that, it’s just a universal truth.