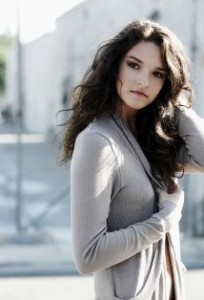 If you’ve been a fan of some of television’s most popular shows the past few years then you’ve certainly seen Chelsea Ricketts. From “CSI: Miami” to “Grey’s Anatomy.” “Hot in Cleveland” to the current cult hit “The Killing,” she has built a solid body of work in a short time. This week Chelsea stars in the drama “Crooked Arrows,” the story of a Native American lacrosse team and the challenges they face as they try to win a prep school tournament. Chelsea recently sat down with Media Mikes to talk about the film:

Mike Smith: What drew you to the project?
Chelsea Ricketts: It was really something different to me. One thing I look for is something that is new and adventives. Something I haven’t already seen or heard or read about. “A,” I had never seen a lacrosse film before, so that was interesting to me. And “B,” to have the Native American aspect…to show how Native Americans invented the sport, was really intriguing.

MS: Tell us a little bit about Nadie Logan, the character you play in the film.
CR: She is Joe Logan’s (Brandon Routh) sister. He’s the coach and I’m the assistant coach. I’m actually a player on the team but I later become a coach. She’s a really cool, passionate girl. “Passionate” is definitely the right word to describe her. She absolutely lives and breathes the sport of lacrosse. She loves what she does. But she’s also a really cool, tough girl who can hang with all the guys. But they all still like her and have crushes on her…so she’s kind of awesome! (laughs)

MS: Were you athletic growing up? Did you have to learn to play the game?
CR: I knew what lacrosse was but I didn’t grow up with it. I grew up in Houston, Texas and when I was in school it just wasn’t as big there. Now it’s pretty widely spread all over Texas. I was athletic. I played other sports. But lacrosse was new to me.

MS: You appeared in several episodes of “The Killing” this season. The show has a very
loyal fan base. Were you a fan of the show before you joined it?
CR: I was a huge fan of the show. That wasprobably my favorite thing I’ve ever done. To be such a big fan of the show and then get to create a character on it was like a dream come true. I was so nervous on that set…walking on I was like, “Oh my gosh!” It was just so surreal. It was awesome. Awesome.

MS: What are you working on next?
CR: I have a film coming out in the fall (“Chasing Shakespeare”) with me, Danny Glover and Graham Greene. And I’ve just started working on the ABC-Family show “The Secret Life of the American Teenager.”