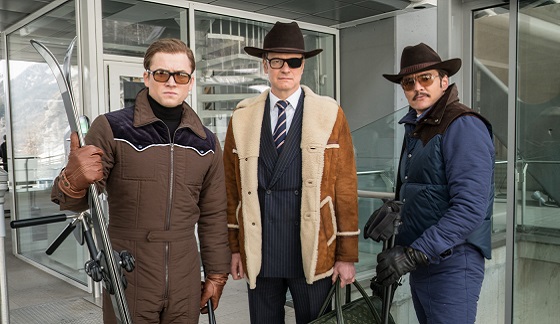 As if emboldened by an impressive box office receipt and growing fanfare, studio executives clearly handed over a blank check and unrestrained creative control to Matthew Vaughn. For better or for worse, his second time around with the “Kingsman” franchise has him embellishing every little detail to the point of nausea. Like some of James Bond’s sillier outings (“A View to a Kill” and “Die Another Day”), “Kingsman: The Golden Circle” is pure insanity as we’re rushed through another absurd outing with Britain’s super-secret intelligence organization.

Within the first five minutes, the movie drips in excess action and CGI, immediately taking viewers out of anything resembling sanity. Eggsy (Egerton), the hoodlum turned hero from the first film, fights a former Kingsman recruit, also from the first film, who has a robotic arm with a mind of its own. That’s not even the craziest thing in this film. After disposing of him, we then go through the set-up motions as we meet Eggsy’s girlfriend, the sexually exploited Princess from the end of the first film, and catch-up with the other holdovers from the first flick. Anyone who hasn’t seen the first will unquestionably be confused and lost from the get-go.

The film squanders very little time getting to the villain of the film, Poppy (Moore). Poppy is the leader of a high-powered drug cartel. She wears a psychotic smirk on her face, forcing her underlings to undergo grotesque tests of allegiance. Her hideaway, Poppy Land, is a nostalgic step back into 1950’s Hill Valley with robotic murder dogs patrolling the compound. Her beef with the Kingsman is unknown other than she needs to eliminate any potential threats to her devious global plan. After missiles strike several targets in England (which is seemingly shrugged off by everyone else outside the plot), the remnants of the Kingsman activate their doomsday protocol and are forced to rely on their United States counterparts, the Statesman.

It’s difficult to pinpoint the biggest name in a film containing Halle Berry, Channing Tatum, Julianne Moore, Jeff Bridges and Elton John (yes, that Elton John). Very few are used to affect except for Elton John. He arrives as an unnecessarily needed and gratuitous cameo, but evolves into a delightfully needed and gratuitous cameo. However, my disappointment stems from a lack of Bridges, Tatum and Berry, who play different components of the Statesman organization. You could also make the argument for Moore’s character. “The Golden Circle” could have benefitted from as much Moore as possible, just like the previous film benefitted from a lisping Samuel L. Jackson.

The action isn’t entertaining in the traditional sense, but in a fun, manic Saturday morning cartoon kind of way. The laws of gravity, rudimentary physics, the limitations of the human body, and common sense are an afterthought for most the film’s runtime. Just like the first film, there are the over-the-top gadgets that serve one inane purpose. There’s even one gadget that’s too sexually explicit to even attempt to convey in a PG way.

“The Golden Circle” is delightfully bonkers, locking reality out of the writing room and barring believability from the set. The “Kingsman” universe has American citizens being locked up by their own government in cages, bad guys driving down the streets of London with .50 cal machine guns blasting away in full sight of civilians, and oddly placing a retirement home below an avalanche danger zone. To expect anything remotely logical would be a dishonor to the film’s status quo, but adding a little of intelligence certainly wouldn’t hurt it in the long run.

Media Mikes has teamed up with their friends at 20th Century Fox to give 50 readers and their guest a chance to be among the first to see the upcoming film “Kingsman: The Golden Circle.” All you have to do is click here and download your passes.

Each pass will admit the winner and their guest into the upcoming screening on Monday, September 18th at the B&B Shawnee 18 Theatre in Shawnee, Kansas. The screening will begin at 7:00 pm.

This is a first-come, first-served contest. Once 50 passes have been claimed the giveaway has ended.