“CBGB Was My High School” is a coming of age biography written by G K Stritch. The book is being released via Full Court Press and is more than just your normal biography. Not only does Stritch tell her story of growing up and details the trials and tribulations that come with that but she also incorporates the growth of the NY art/music scene during what I feel is one of the City’s most interesting periods.

This book is a fun and quick read that will have the reader not wanting to put this book down. The growth of places like Max’s Kansas City and CBGB’s are seamlessly interspersed with Stritch’s own accounts of her times at these places. Stritch’s words paint a picture that makes you feel like you are a fly on the wall taking it all in.

From abusive relationships to meeting a former first lady author G K Stritch covers it all. “CBGB Was My High School” is an honest look at 70’s/80’s New York told from the perspective of someone who was there. Even if biographies aren’t your thing give this book a chance. I don’t think you will regret it. 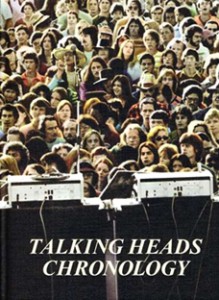 For Tina to have expressed this wish within the context of an interview is not really all that surprising given the success that Talking Heads had already achieved in the four short years following their inception in 1975. But what IS surprising is where the interview took place – not in the basement bowels of NYC’s legendary CBGB’s or a “new wave” club, but on Dick Clark’s American Bandstand.

“Talking Heads: Chronology” allows the viewer to see this clip of bizarrely juxtaposed elements as well as 17 others, most of which are previously unreleased. These excepts range from their early beginnings as a CBGB’s-based trio all the way up to a 1983 clip from Saturday Night Live as well as a spot-on performance of “Life During Wartime” from the 2002 Rock and Roll Hall of Fame induction ceremony. Overall, “Chronology” is an amazing compilation of archival footage that allows us to see the development of a band that was clearly making its mark on music history from square one.

What’s even better about the disc is the optional commentary track that features all four Heads – David Byrne, Chris Frantz, Tina Weymouth and Jerry Harrison. It’s a joy to hear each of them reacting to their younger selves, reflecting on the group’s musical journey and sharing amusing behind-the-scenes stories and bits of trivia. The only minor issue with the track is that each band member’s comments were recorded separately, so it lacks what undoubtedly would have been great banter between the long-estranged band mates had they been in the same room. Regardless, this secondary track adds a level of depth to the collection of clips and helps to make “Chronology” markedly more substantial than most music video DVD compilations.

The disc also includes a 35-minute segment from 1979 that is culled from the London-based “South Bank Show”. This – almost more than the 18 music clips – is essential viewing. The interviews with the band members provide tremendous insight into what made Talking Heads a truly great band and the rehearsal footage shows the unique dynamic of a group that could instantly lock into their own groovy vibe and let the strange and wonderful wizardry happen. It’s also full of truly endearing moments such as Jerry Harrison’s creative solution to forgetting a rhythm guitar line: pulling out a copy of the studio album that the track appeared on, dropping the needle into the vinyl and playing along with it. The entire South Bank segment is quite riveting and really should have been integrated into and prefaced the main content of the DVD. Unfortunately, it’s been relegated to merely being a bonus feature that most viewers are likely to skip over and never see. The other bonus feature, a David Byrne interview from 1978, doesn’t really offer up anything that isn’t covered in the South Bank segment – save for proving that Byrne can handle the noxious haze generated by a chain-smoking interviewer without coughing or decking him.

As one could reasonably expect, the DVD’s overall image quality is variable as a result of the source material and is presented in 4:3 aspect ratio.  The archival clips, however, sound amazingly good: the disc’s Dolby Digital 2.0 audio is quite dynamic and punchy (only the two CBGB’s clips from 1975 are a bit distorted and thin).  The DVD is available in two editions: a standard-issue disc and a deluxe edition that adds a 48-page hardcover book featuring an essay by Lester Bangs.

“Chronology” is a wonderfully-crafted gem that shines not only as a vital supplement to any established Heads fan’s collection but as a great introduction for generations that may have completely missed out on the band’s musical magic. It’s clear that the creators of this DVD very much love the group that the project chronicles and aren’t just out to make a quick buck from nostalgia seekers. But, more so, they know and truly appreciate the fact that truly amazing artists like Talking Heads only come around once in a lifetime.