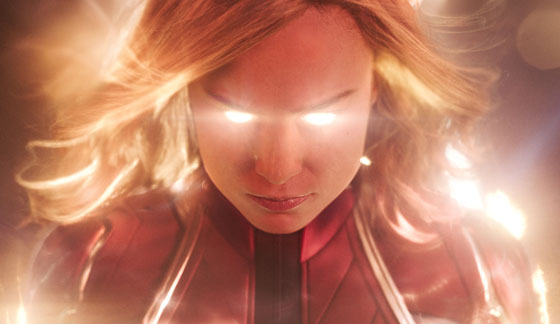 It only took 21 movies for Marvel and Disney to finally release a female-led superhero film, and it’s not about Black Widow. It’s the kind of some comic book fans have been clamoring for, for about a decade now. For those fans, I have to warn you up front, this isn’t the monumental moment you’ve been hoping for.

“Captain Marvel” is an origin story in reverse. When we first meet Captain Marvel/Carol Danvers (Larson), she goes by Vers and is having her skills crafted under the observant eye of the Kree military. She’s in a unit that serves as an important cog in the intergalactic war between the Kree and Skrull. Honestly, if you don’t know what I’m talking about, you have a lot of movie binging to do. The film really doesn’t pick up pace until “Vers” is stranded on Earth after being ambushed by some Skrull. It’s on Earth that she not only chases down the Skrull, but begins chasing down fleeting memories of a life she’s forgotten.

The first 30 minutes or so are pretty rough, even if you understand and know all of the necessary backstory that’s been glossed over in “Guardians of the Galaxy” and “Thor” films. It attempts to juggle exposition, mystery, and introductions, while handling them all poorly. The exposition isn’t interesting, we already know who “Vers” is, and Marvel is generally terrible about disguising their surprise villains. The movie actually gains momentum and gets a lot more fun when Danvers crashes through the roof of a Blockbuster Video, one of the dozens of reminders that this takes place in the mid-90’s.

As a child of the 90’s, all the winks, nods and nudges are welcome, but they ultimately come off as pandering. The movie feels like it needs to tickle some nostalgia bones, in lieu of character building or plot development. That being said, I don’t mind a little Nirvana or No Doubt in my soundtrack or jokes about how painfully slow computers and the Internet used to be. Millennial inside jokes aside, it’s on Earth that Danvers runs into a young Nick Fury (Jackson), which helps serve as a bit of an origin story for the Avengers initiative.

The 70-year-old Jackson and the 29-year-old Larson are actually a dynamic duo. Their green screen scenery chewing brightens up some otherwise dull moments. It’s regrettable that Marvel missed out on giving them some 90’s buddy cop tropes to gnaw on. “Captain Marvel” may have actually worked better as a parody or homage of films like “The Last Boy Scout” or “Bad Boys.” Luckily these two stars share a lot of screen time and seem to feed off each other’s energy.

“Captain Marvel” is what we’ve come to expect from these yearly Marvel traditions, a lot of CGI, fun set pieces and eye candy for the masses. I actually had quite a bit of fun when I wasn’t analyzing its flaws. So if you want a mindless superhero film, then that’s what you get. That being said, it’s still above the mindless action of Snyder’s DC films because it doesn’t bog the fun down with a bleak atmosphere and outlandish character interactions. For others who are expecting a little more or something a lot more audacious, you’re out of luck. Disney probably over thought this one a bit; and it shows.

If it weren’t for Larson and Jackson, the film may have been a forgettable dud in the same vein as “Thor: The Dark World” or “Iron Man 2.” Those two wring out so much from a minimal script. The writers seemed to be more interested in padding time and setting up a payoff, which never pays off. The film has about half a dozen writers and doesn’t do anything remarkably different with tone or style, like “Thor: Ragnarok” or “Black Panther” managed to do in recent years. “Captain Marvel” is the kind of film you could nitpick to death if you don’t turn your brain off. Everything from visual effects to casting choices is suspect and up for ridicule.

I actually didn’t have high hopes for “Captain Marvel,” so I may not find it as underwhelming or disappointing as some people. Whereas a film like “Wonder Woman” felt like it was breaking new ground, “Captain Marvel” seems to tread water. A lot of that may be due to Disney’s weariness of trying something outlandishly new or daring with its multi-billion dollar baby. Disney could merely be testing the waters. You should be frustrated if the next female superhero film from the studio powerhouse is another cookie cutter film. A progressive step requires a fresh idea, not a copy-and-paste formula that’s slowly becoming stale.