Anthony Daniels is known best for playing the role of droid C3PO in the “Star Wars” franchise. He is only the actor to act in all the original six films and all the following spin-offs. Anthony recently attending “Star Wars Celebration VI” in Orlando, Florida and took out some time to chat with Media Mikes and reflecting on his role in the “Star Wars” universe.

Mike Gencarelli: How does it feel to be the only actor to act in all of the original six films?
Anthony Daniels: It is very odd, because many people know that I didn’t want to be in the first “Star Wars” film and refused to meet George (Lucas). It is really weird to be the only actor to work on the set of all six movies. Cause I never wanted to work on a low budget sci-fi movie. So the rest is history after “Episode IV”, as it then became, fans just took George’s little film to heart and they ran with it. Then we made another and another one. It was really hard work. After being dressed up in that suit, it wasn’t something you wanted to do a second time. Then after those three films, all of the other spin-off projects happened. Suddenly you realized after 37 years, you are immensely proud of you are apart of something that is completely phenomenal. It took being the narrator of “Star Wars: In Concert” for me to really get “Star Wars”. I narrated the whole show from “Episode I” through “Episode VI” with no jiggling about on a stage with a symphony orchestra with specially edited clips being displayed on this HUGE screen. I have done it 151 times now and I think I am finally getting it right. The thing I like most about the concert is that the audience is live and you can see the audiences excitement and affection for a tiny bit for me, a huge amount for John William’s music and an enormous about for George’s films. You don’t get that time of energy in the studio. So, I have lived long enough to go through a time when I thought that “I shouldn’t be doing “Star Wars” stuff anymore” to thinking “Wow, am I lucky”.

MG: Tell us about working on the new series “Star Wars: Detours”?
AD: It is amazing. I had to keep that show a secret for about a year or so. Some of the scripts I recorded are absolutely hilarious. It was some much fun to do such a strange yet ridiculously humorous script with this character than talking about hyper-drive motivators which is very serious. So finally “Star Wars” is coming to a part of its life that people love it so much that you can poke fun, tease and humiliate in a friendly way. So there I am still being “C3PO, Human Cyborg Relations” (spoken in character) but allowing all sorts of variance to the storyline.

MG: When “Star Wars” has an event like “Star Wars Weekends” or “Star Wars Celebration” you are there; what do you enjoy most about still reflecting on these character after all these years?
AD: With an event like “Celebration”, you get to see all the people that love this. The word fan can be used rather rudely sometimes. I do not have a problem with fans, without them we wouldn’t have this “Star Wars” saga. Then you have the 501st, now the first time I saw then I thought “now that is a little weird, isn’t it?” Then I saw what I did, which was dressing up for a living…at least they do it for fun. They are such a phenomenal group of people literally around the world. They bring the movies off the screen to events. There is even a c3PO walking around this convention right now. It is such huge affection and I get to be a part of it.

MG: Since we are in FL, besides being in the films; how is it being immortalized in “Star Tours” at Hollywood Studios?
AD: Ok, there is the six movies, the radio series, the various cartoon series like “Droids and “Clone Wars”, there is the LEGO series, which I am about to record another movie for that this year, then of course there is “Star Tours”. We did that 20-something years ago and then came back to me about three years ago and said they were re-doing it. Tom Fitzgerald, the producer, told me all about the new story lines and that there was also another change they were making, which that C3PO was going to be the star. Well it was one of the toughest jobs that I have ever done. It took 2-3 days just recording the lines alone. Since they are all in high intensity, I was just exhausted. I literally spent the following day in bed literally from being exhausted. We also did some live filming for it also, so I was back in the suit for that. So then we get to go the ride and it was just “Wow”. For people that haven’t been on it, it has 54 variations, which is so clever. People ask “how can I get on stage in front of 25K people” and I saw I don’t know but I can. But then I do to Disney and ask how can you make things like that. They just saw it is kind of their jobs, so everyone has these jobs. So long after I am dead, that ride will be there will C3PO chirping away and being funny, bossy and silly still. And who knows maybe my foot print will also still be in front of the Chinese Theater (home of the “The Great Movie Ride”). Not long ago, I was in a deli in New York and they had the tin-man from “The Wizard of Oz” and I thought one day that would be me. The one thing about the business is that these characters are forever now and iconic. It is so big that you can’t compute it.

MG: What is your favorite character in the saga…and you can’t say C3PO?
AD: Well curiously [laughs], I have no problem saying that it is Darth Maul. He is a wonderful creation, whether it is that he was here and then left you wondering who was that strange creature. But I am sorry that Ray Park got chopped in half because not only was he was lovely guy but Darth Maul is just so purely evil that you can’t help but think “Oh that is kind of cute” [laughs]. You know Darth Vadar…Yeah Yeah Yeah. Boba Fett, no idea what that is about. There is nothing secret about Darth Maul. Well everyone has their favorites. Some people love Jar Jar Binks, the younger generation, who are usually under 10 years old. Some people like Ewoks for heaven sakes. [Note, Warwick Davis, who played Wicket the Ewok in “Return of the Jedi, was sitting right next to us during the interview]. Everyone has a following. So there we are. So it has recently occurring to me when I see 3-4 year old children in line in meet me and they are my future. In 10 years, they will be 15 and I will be….YEAHHHH. So it seems to be I see three generations and they younger generation is still going to be new to this series. What is lovely is that they are able to taker the whole of George’s sandbox and take it always into new directions. 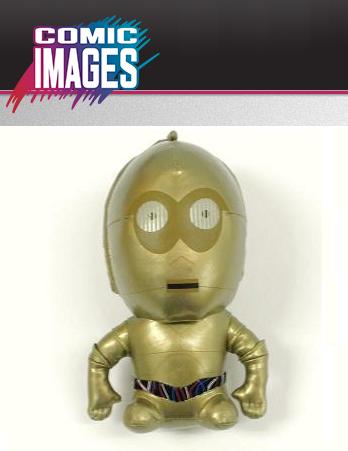 In honor of San Diego Comic Con this week, Comic Images and Media Mikes are teaming up to giveaway one of their brand new limited edition first-ever C3PO Super Deformed Plush. This is a 14” limited edition Super Deformed Plush made of gold lamé that will only be available at Comic Con and Celebration.  This is a special and super rare giveaway for the biggest “Star Wars” fans.

If you would like to win one of these great prizes, please leave us a comment below or send us an email and let us know your favorite quote from “Star Wars” series. This giveaway will be open until Friday July 27th at Noon, Eastern Time and is only open to residents of the United States. Only one entry per person, per household; all other entries will be considered invalid. Once the giveaway ends, Media Mikes will randomly pick out a winner and alert via email.

If you are hitting up SDCC this year but sure to visit the Comic Images booth (#2913B), where Yoda, Darth and Chewy join Spidey and Frankenstein to rein supreme in all their geekdom.  For more information about Comic Images product line, visit www.ComicImages.com.