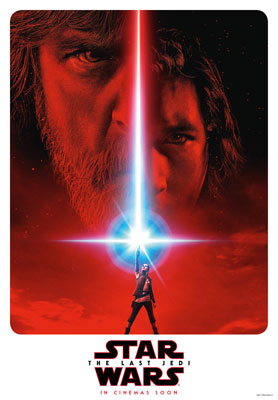 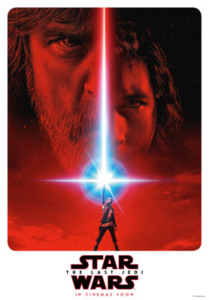 Has it really been 40 years since the world was first introduced to the young dreamer Luke Skywalker?  It has.  Heck, if you don’t count the brief appearances in Episodes III (as a newborn baby) and VII (the last moment of the film), it’s been 34 years since Luke has been on the big screen.  But those numbers are in the past as the Jedi master finally returns in the eighth chapter of the original saga, “The Last Jedi.”

The film begins where “The Force Awakens” left off.  We are there as the galaxy’s newest hero, Rey (Ridley) finally tracks down Skywalker (Hamill) and hands him his old lightsaber.  His reaction is not what she expects.  Meanwhile, the first order, led by General Hux (Domhnall Gleeson) and Kylo Ren (Adam Driver), both of who are under the power of Supreme Leader Snoke (Andy Serkis) have closed in on the Resistance, led by General Leia Organa (Fisher, in her final screen role).  As things begin to go from bad to worse, Leia reluctantly begins to trust in the leadership and ideals of ace pilot Poe Dameron (Oscar Isaac) who in turn butts heads with Vice-Admiral Holdo (Laura Dern).  Can everyone agree on the right path to take or will evil finally win?

With a script by director Johnson, “The Last Jedi” is a mash-up of many different stories, but all with the same main plot line; good versus evil.  As Rey tries her best to convince Luke to return with her to help the Resistance, he gives her many reasons why he should not.  Among them is the guilt he feels over how his one time student, Ben Solo – his nephew – has transformed himself into the evil Kylo Ren.  In another part of the galaxy, we discover Finn (John Boyega) on an adventure of his own, one in which he meets the funny and resourceful Rose (a much welcome Kelly Marie Tran).  Rose is one of the many new faces that dot the screen, along with Dern and a wiley Benicio Del Toro.  But don’t despair, there are a few old faces that pop us as well.

The cast here is strong, with Hamill’s performance quite powerful.  He’s lived with this character for four decades and it’s obvious he’s invested heavily into it emotionally.  Driver, who came off as a little whiny in “The Force Awakens,” is much stronger here, a sign he has gotten comfortable with the character and its place in the story.  Sadly, this is Carrie Fisher’s last performance as Leia Organa, and the film is dedicated to her.  It’s apparent to me that Princess Leia would have been an integral part of Episode IX and I’m curious as to how they will handle her absence.  And if you’re looking for “cute,” not only is fan favorite droid BB-8 back but we also meet a creature known as a Porg, a puffin-like creature that makes the Ewoks from “Return of the Jedi” look like slugs!

To share anymore would necessitate the use of the words SPOILER ALERT and I would rather share less than more.  And with a 2 ½ hour run time, there is plenty I could spill.  But I would rather be dropped into a Sarlac pit then ruin your journey back to the galaxy far, far away.  May the Force be with you!