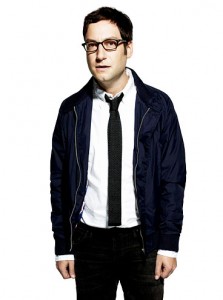 Adam Busch is currently co-star on TBS’ hit show “Men at Work”.  He co-stars along side Danny Masterson (“That ’70s Show”), James Lesure (“Las Vegas”) and Michael Cassidy (“The O.C.”).  “Men at Work” is one the best new shows on television right now and was already renewed for a second season next summer. Like myself Adam is also a Long Island, NY native who then moved to Orlando FL (also like myself) to pursue acting.  Media Mikes had a blast chatting with him about “Men at Work” and if you haven’t seen this show be sure to check it out on TBS.

Mike Gencarelli: What drew you to “Men at Work”?
Adam Busch: I have always wanted to do a sitcom. I started working for Nickelodeon on the show “The Mystery Files of Shelby Woo” and across the hall they were recording the sketch comedy “All That”. Our show was serious and we would hear this laughing and screaming next door whenever the stage door was opened. They were always having such fun and improving on the fly. I said myself that I wanted to do that.  Well, it took about 15 years later but I am finally making it happen. It was definitely as fun as I thought it would be.

MG: How do you prepare for the role of Neal?
AB: I like that it’s a place for Breckin (Meyer) and the writers to really explore relationship problems. You get heartache, you get serial monogamy and the pressure of a new dating system. Neal is the only chance to get the positives and negatives of being in a long-term relationships and the things that come up. I think it is a constant reminder to the other guys that things can be much better or much worse depending on the situation.

MG: The show is filmed in from of a live audience, does make it more difficult to shoot?
AB: That is the best part! If at all everything else is a challenge and that is where I feel the most comfortable and have the most fun. When you have been rehearsing a line all week long and right before you say it one of the writers or Breckin comes over and hand you a brand new fresh line that you haven’t had time to think about, you have no choice but just to commit to it. To hear the reactions from the crowd, that is so much fun. I love the studio audience. There is also a rhythm you can into like if the audience is laughing or Oooing and Ahhhing, you can tap into that and just go with it and make the audience happy.

MG: You find that their is a lot of room for improv?
AB: Well, yeah there is room for it and it certainly does happy sometimes. The really exciting thing is that it gives room for Breckin and the writers to come up with lines on the fly.

MG: Breckin Meyer seems like he is always there on set, huh?
AB: He is always there. Every day, after we rehearse with the director, we do a run through for him to hear it and see it. He is the one giving notes on our performance or walking around making sure everyone is cool or has questions before the shoot. It is a really lucky situation having a young actor as your boss. Also everything is ripped right from his life, so he has all the answers.

MG: The chemistry between you and the guys are great, you find it hard to stay serious while shooting?
AB: Yeah, I do…I do. But that is what is great about doing a show about four friends. Very often if I am laughing at something James (Lesure) is saying during the shooting, there it is right in the show. We are friends and he makes me laugh and that is it. I don’t have to remain serious. We enjoy the way we all interact. Our dynamic of us hanging out is actually a lot different than our dynamic on the show. In the show everyone makes fun of Neal but outside we all make fun of (Michael) Cassidy. He is so freaking pretty and you can’t resist [laughs].

MG: What has been your favorite episode so far this season?
AB: I don’t know if I have a favorite episode. But I certainly have a favorite scene, like when I smack Cassidy back into reality. That was really fun and it changed so much throughout the week. First it was him smacking me, then it was me smacking him and it ended with us both smacking each other. We decided we were just gonna do it, no blocking with camera to fake it. I said I gonna smack you and your gonna smack me and that’s it. I also loved meeting J.K. Simmons and working with him. It was really wonderful.