Eric Bauza is the current voice of Bugs Bunny in Looney Tunes Shorts. He also voices Daffy Duck / Marvin the Martian / Tweety Pie for the show.

Media Mikes had a chance to chat with Eric to discuss taking on these iconic roles and talking about voicing his dream role. 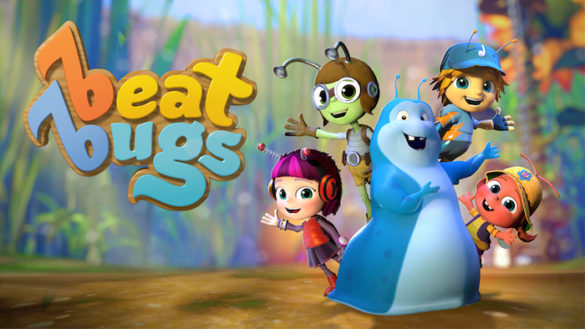 Netflix has been known for their original series content. They have come up with some truly amazing shows like “Marvel’s Daredevil” or “Orange is the New Black”. One of their latest their latest though is aimed at a slightly younger audience yet has stolen the hearts of the entire family. The new preschool-targeted animated children’s show is called “Beat Bugs”, it is a Netflix Original Series inspired by the music of the Beatles. That’s right the Beatles. Each episode is specifically titled after a song and it also re-recorded and sang throughout the episode. I cannot recommend this show any more! Fun for the whole family!

This show follows five friendly, child-like bugs that learn big lessons about the world around them, all from the safety of their own backyard. There is no shortage of talent either, this Emmy Award-winning series features the talents of P!nk, Sia, Eddie Vedder, James Corden as well as other big-name stars who cover the Beatles songs in each episode. The main reason why “Beat Bugs” is so important because it introduces a whole new generation to one of the most influential band in rock history (and my favorite), The Beatles.

I have a five year old daughter and she doesn’t like The Beatles…she LOVES them! From the moment she was born literally, we had Beatles lullabies playing in the hospital and flash forward five years, she is gearing up to see Paul McCartney live in concert this Summer! She is non-stop singing their songs. So when I introduced this show to her and the she heard the theme song “All You Need is Love” kick off, her eyes lit up…let’s just say that it took literally six episodes before we could get her away from the TV!

Netflix really has a huge hit on their hands here and I know that there is lots more planned for this show in the future with cool consumer products outside of the episodes. If you want to find out more about this show please check it out via the following links: Official Website / Netflix Page. Stay tuned also to MediaMikes.com as we will be covering this show with all their excited new products coming out this Summer.

When it comes to Bugs Bunny and Looney Tunes, I have been a life-long fan. This film is not your typical Looney Tunes special.  It is a documentary, hosted by animator Bob Clampett with interviews with Friz Freleng and Tex Avery.  This is also narrated by legendary director Orson Welles.  It includes nine Looney Tunes/Merrie Melodies cartoons which were previously released during the 1940s.  This is a must for any Looney Tunes fans.

This is the first time that this has ever been released on DVD, thanks to Warner Archive. This release is presented in 4X3 full frame with the its original aspect ratio of 1.37:1. The audio track is the original mono audio, which works perfectly. Surprisingly  there is actually some decent special features including a commentary track from director Larry Jackson and an image gallery with behind-the-scenes photos.

Official Premise: What was it like to work in Termite Terrace, birthplace of Bugs Bunny, Daffy Duck and a veritable horde of cartoon icons? Get a taste of that crazy and creative fun factory in this loving and droll documentary, hosted by ace animator Bob Clampett. Featuring interviews with fellow Termite Terrace residents Friz Freleng and Tex Avery and narrated by Orson Welles, Bugs Bunny Superstar includes nine complete cartoons that are prime examples of the collaborative efforts of Warner cartoonists, ink-and-painters, effects artists and others. “No idea was too outrageous,” Clampett says. Seeing rare home movies of the animators as they act out ideas adds to that sense of unrestrained creativity.