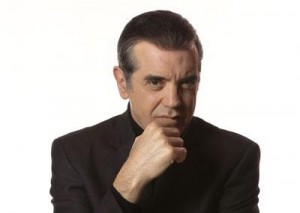 Chazz Palmenteri is known best for his roles in films like “The Usual Suspects”, “A Bronx Tale”, “Bullets Over Broadway”, in which he received an Oscar nomination. Chazz brought his one-man play “A Bronx Tale” back to Broadway in 2007 and since then he has been continuing to tour each year with this show. Media Mikes had a chance to chat with him about the show and what he has planned next.

Mike Gencarelli: “A Bronx Tale” hit Broadway in 2007 and hasn’t stopped since; tell us about your journey you are taking with this one-man show?
Chazz Palmenteri: I originally did this back in 1989 and I brought it back to Broadway in 2007 since there was a whole generation of people that didn’t get to see it. It was just going to be Broadway for six months and that’s it. It was such a huge success, they wanted to do a National Tour and I thought I would finish in Vegas. So I did it again in Las Vegas in 2009 after the tour and then it became show of the year and they just keep calling me back. Now I do the like two or three dates a month traveling it around. I want to keep doing it. I can’t stop because people keep wanting to see it.

MG: The show is a real physical workout; how do you prepare for it each night?
CP: I just stay in really good shape. I work out a lot. I am on the treadmill a lot. I watch my weight. I just take care of myself and that is the only way that you can prepare for this. You really just have to be in really great physical condition.

MG: How long do you see yourself touring with this show?
CP: I still am doing plenty of film and TV but I am going this in between gigs. I love doing it. I don’t know, I will continue to do it until I can’t physically or people don’t want to see it.

MG: Ever considered filming it and releasing it on Blu-ray/DVD?
CP: I have thought about that but I haven’t decided what I wanted to do with the show yet. But we will see.

MG: What else you got in the cards next?
CP: I do have a big film that I wanted to talk about. I will be in London this month shooting, “The Kray Brothers” with Tom Hardy. I am really looking forward to that.

Here are the rest of the upcoming show dates for the tour of “A Bronx Tale”: