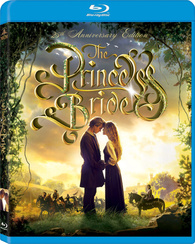 Has it really been 25 years since “The Princess Bride” came out…simply inconceivable! I remember the first time that I watching this film, I was immediately in love.  This is just one of those films that you can watch over and over and it doesn’t get old. The romance.  The comedy. Good vs. Evil. This film really has everything.  It is one of Rob Reiner’s best pictures. This 25th Anniversary Blu-ray isn’t the first time this film was released on the format, since it was released back in 2009 as well.  If you own the previous version, then you should be good.  But hardcore fans are going to have to double-dip for the amazing new retrospective documentary included in the extras.  Get ready to experience this film again its all its comedy and romantic glory.

Fox delivers a wonderful Blu-ray release. The 1080p transfer looks glorious presented in its 1.85:1 original aspect ratio alongside a 5.1 DTS-HD Master Audio track, which is easily as impressive. The star of this 25th anniversary is a really neat all-new, two-part retrospective documentary called “True Love: The Princess Bride Phenomenon”. It is worth the purchase alone for the Blu-ray and brings back all the cast to reflect on the film. There are two audio commentaries, the first with director Rob Reiner and also screenwriter William Goldman. There are four fantastic behind-the-scenes featurettes including “As You Wish: The Story of The Princess Bride”, “The Princess Bride: The Untold Tales”, “The Art of Fencing”, “Fairy Tales and Folklore”, “Miraculous Makeup”, “The Dread Pirate Roberts: Greatest Pirate of the Seven Seas” and “Love is Like a Storybook”. This covers just about everything you want to know about the production. Cary Elwes’ video diary is fun look behind-the-camera with the star. Lastly there is the original theatrical trailer and a few easter eggs, so keep an eye out.

Two best friends Kate (June Diane Raphael) and Chloe (Casey Wilson) are living the so called “high life” in New York when they run into their former pageant nemesis, Laurel (Alicia Silverstone), who has gone on to become a multi-hyphenated superstar.  Kate and Chloe, whose lives are not as fabulous as they seem to be, embark on a cross country road trip back to their hometown to attempt to win a pageant that eluded them as children. On the road, they face some hard truths about themselves and each other as they encounter spring breakers, strip clubs, a women’s militant group, and their favorite reality star.

“We are excited to have acquired the very funny and quirky comedy Ass Backwards,” said Elias Axume, President, International Distribution for Maya Entertainment. “The cast, led by Alicia Silverstone and Jon Cryer, is terrific and very appealing to many international markets.”

Based in Los Angeles, Maya Entertainment Group, Inc. is an independent multi-platform content and distribution company that has established itself as the leader of media product that appeals to the “new mainstream” of American Latino and Multi-cultural audiences.  Led by entertainment industry pioneers, Moctesuma Esparza (Selena, Gettysburg) and Jeff Valdez (Sí TV, QuePasa.com), Maya Entertainment produces, acquires and distributes entertainment programming and has established a library of over 100 titles, which are available at retail, for rental, and on VOD through Time Warner Cable, Comcast, iN DEMAND, and TVN.