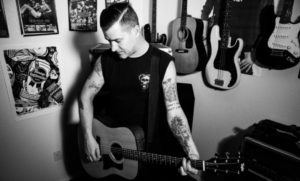 Ray Carlisle is the singer/guitarist for the Wyoming based punk band Teenage Bottlerocket. In November of 2015 the group suffered a devastating blow in the death of their drummer (Ray’s brother) Brandon Carlisle. The group made the decision to keep going and, is currently out on Warped Tour 2016 this summer promoting their latest studio release “Tales From Wyoming”. Media Mikes had the chance to talk with Ray after the bands set in Syracuse, NY where he spoke candidly about the bands decision to move forward and about what the band has planned for the remainder of the year.

Adam Lawton: Tell us about the bands decision to keep going after the passing of your brother in November of last year?

Ray Carlisle: The decision was something that didn’t happen overnight. Brandon passing away put a lot of things up in the like if we were going to keep going as a band and playing music and also if we were going to go out on the Warped tour this summer. We had actually confirmed our spot on the tour before Brandon passed. I personally felt that I had already lost my brother and I didn’t want to lose my band as well. I truly feel that Brandon would have wanted us to keep going. We take the stage each day with him in our minds and in our hearts. His spirit is there while we play. It’s very helpful because I like being up there playing with my buddies. Brandon and I were really close so when I’m up there it’s a chance for me to not feel alone. We were just together all the time and I miss him very much. When we finally decided to get back together Darren Chewka our new drummer was the first guy I thought of to fill Brandon’s spot. We had him come down to Wyoming for a couple days to see how he fit in and everything went real well. We are really finding our chemistry together out here and have played about 45 or so songs together throughout Warped tour as we try and play a couple different songs each day. Needless to say we have been really throwing him for a loop. That’s kind of the spirit of this band is to just go song after song so we have had some great days out here so far and we have had some terrible ones.

AL: Today you guys opened up one of the stages here. Do you find that changing set times each day makes it a little more difficult to get in to a solid routine as a band?

RC: You sort of just have to go with the groove. When you are out on Warped tour you find out at 9:30am what time your set is for that day. You then just have to adjust your whole day around that. Going first is awesome! Everyone is fresh and super excited. The down side is some people who up late so they miss things. I enjoy the earlier slots over the later ones because you can just see the energy change as the day goes on. The heat can be tough on the crowd during these shows.

AL: With this being the bands second run on the Warped tour how do you feel the tour has changed since your last appearance in 2014?

RC: I am kind of bummed that they don’t have the acoustic stage this year. I recently had a solo album come out titled “Do You Wanna Go To Tijuana” and I was hoping to be able to do double duty and play some songs off of that. They also did away with the hip hop/rap stage this year. There are less bands and stages which means a smaller line in catering. Kevin I think really did his research this year for which bands he wanted to bring out and things are really positive around everything.

AL: Your latest album came out in March of 2015. Where are you at in the writing process for your next release?

RC: We are still on the cycle for “Tales From Wyoming” however Brandon did have some songs he was working on before he passed away. Cody and I have been talking about maybe finishing those up. They don’t necessarily sound like Teenage Bottlerocket so we will have to see. Cody and I are both still writing music and we have also talked about doing a concept album as well. There will definitely be more music and shows in the future. Things really changed when Brandon died so it’s something we are going to have to embrace and move forward.

AL: After Warped tour wraps up what are the tour plans for the band?

RC: In September were going to be doing a few shows in Canada which is where our new drummer is from. We will be up there to prove to all of Derrick buddies that he is in fact in the band. It’s also really great touring up in the Edmonton area. In December we are going to be doing a European tour with a band by the name of Bones.

For more info on Teenage Bottlerocket you can check them out at http://teenagebottlerocket.com/