We’ve all been there, bored out of our wits, stuck at home, waiting for the train or traveling with the bus, and we have all wished to be relieved of that boredom. So, what can be done about it? There are actually lots of things you can do. One of them is playing online casino games, and if you don’t already then we suggest giving it a try. It is an amazing way to deal with boredom. There are so many games on offer, meaning, so many ways to kill time. 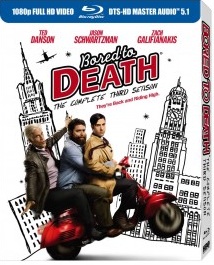 “Bored to Death” has me hooked from episode one of season one. The show is show quirky and unique that I was instantly a fan. As the show developed, I feel that it only got better. I know it might be a bold statement but I feel that has been easily some of the best work from the three stars; Jason Schwartzman, Zach Galifianakis, Ted Danson. Like the majority of comedy shows on HBO, last year this show was canceled following this season. It is a shame because it was one of the best things the network had going for it (besides “Game of Thrones”, I know).

The third season of this show really delves deep its its characters. It also continues to develop the three stars relationships, specifically the relationship with Jonathan and George. Jonathan’s detective duties get much more in-depth as well. Bigger is not always better since he finds himself in ever more trouble with his unlicensed occupation.

On television the show might be presented in HD but only 1080i, so the show does look a lot better it is full HD 1080p presentation. It also sounds fantastic with its DTS-HD Master Audio 5.1 track, though since its a comedy it doesn’t push the barrier. The special features are decent but not too special per se. There are 4 audio commentaries, a few deleted Scenes, outtakes and a featurette called “Inside the Episodes”.