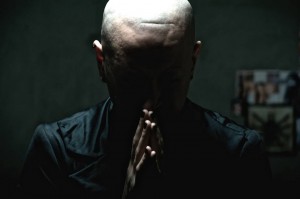 Joseph Bishara is the amazing composer for horror films like “Insidious”, “The Conjuring” and most recently “Annabelle”. He is also probably the cause of a few of your nightmares since he played great characters like Lipstick-Face Demon in “Insidious” and Bathsheba in “The Conjuring”. Joseph took out some time to chat with Media Mikes again about his new film “Annabelle” and what we can expect.

Mike Gencarelli: From your role of Lipstick-Face Demon in “Insidious” to Bathsheba in “The Conjuring” to your latest role in “Annabelle”; what do you enjoy most about getting to play these roles?
Joseph Bishara: I like being able to look through the eyes of these characters, and getting to have a different perspective and take on the film. It’s seeing the scenes unfold from the inside. They were all very interesting characters to explore.

MG: We got to learn about your character in “Insidious” and “The Conjuring” but not much in “Annabelle”, give us some background on your role?
JB: It’s the demon that’s attached to the doll. When discussing the character with James (Wan), his take described it more specifically, as Lorraine Warren would explain as a “latching demonic”.

MG: How does it feel like to give a grown man nightmares with these roles?
JB: [laughs] That’s a good thing. I won’t apologize for anyone losing sleep, everyone needs to have nightmares.

MG: You not only have roles in the above-mentioned films but you also are the composer delivering spin-tingling scores; what do you enjoy most about working in this genre?
JB: It’s the genre that I feel most comfortable in, and with the directors that I have worked with I have been given a lot of freedom to take the scores in the directions I wanted. Horror is always a favorite of mine and I just really enjoy creating in that space.

MG: “Insidious” is easily one of the best horror scores in recent years; how do you approach a score when you are working with the film?
JB: When I start on a score, I just start hearing it in my head often from the moment it starts being discussed. I can’t really explain it but if the project is right, ideas will just come. It’s finding what the language is and isn’t, and then speaking it.

MG: What can we expect from you in terms of role and composer in “Insidious: Chapter 3″?
JB: I can’t say much just yet, but Leigh did an excellent job with it and brings a bit of a different flavor. Hopefully you’ll lose more sleep.

For more info, check out his official sites: www.jbishara.com and www.voidrecordings.com 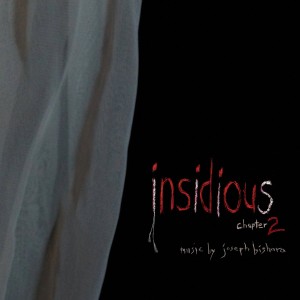 When I first heard the score to “Insidious” back in 2011, I was blown away.  The score was absolutely terrifying. It really drove the film so well and perfectly executed each scare and left you hanging on the edge of your seat. When it comes to horror films, the score is so important and very few actually get it right. Joseph Bishara is one of my favorite composers as he knows what to do in order to bring the horror aspect to horror films. He has worked with director James Wan on now “Insidious” and “The Conjuring” and now this film. I loved both of those films and equally their respective scores. I have to admit though, I wasn’t a huge fan of “Insidious: Chapter 2” as a film but that doesn’t mean that Bishara didn’t completely rock it with this score.

In fact, this score was the real saving grace for me with “Insidious: Chapter 2”. Even though I didn’t find the second film scary at all, the score definitely stood out for me. In the first film, it really carried you and left you biting your nails. But even though the scares weren’t as pronounced as the first film it still added to the overall atmosphere. I felt it got a little lost while I was watching the film. Personally, I enjoyed this score much more at home on this CD listening to it while watching the film. So if you enjoyed the first score from Bishara and despite whether or not you liked the film, I would still recommend this CD because it really delivers what a horror score should sound like! Can’t wait to hear what he does next! 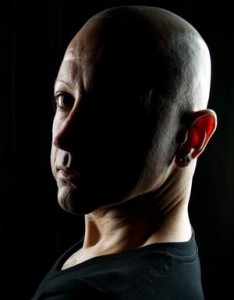 Joseph Bishara is the composer for films like “Insidious” and the upcoming “11-11-11”.  Media Mikes had a chance to chat with Joseph about working in the horror genre and about his recent projects.

Mike Gencarelli: Tell us about what was your inspiration for working on “Insidious”, which is one of the creepiest score since “Halloween”?
Joseph Bishara: Well thank you for that, “Halloween” is quite high company to be held in.
The inspiration for the film really came from the film itself – those were the things I was hearing when looking into the world. James and I talked about some harsh string sounds, extreme dynamics, and I know Leigh sometimes writes with music in mind – but when it comes down it I try not to reference existing music. I wrote a lot and recorded some before the film was even shot, started from the script and was giving James music to edit to early on.

MG: You also have a role in that film as the Lipstick-Face Demon, tell us about that as well?
JB: Yes, James also asked me to be the demon. I had the build he had in mind, already shaved my head, and the temperament to sit in makeup for 5 hours a day. I went in and took a series of pictures with Aaron Sims, who designed the demon over the images. Spent a fair bit of time learning to walk in the hooves, which were built onto 9″ platform heels and strapped to my legs. It was very physical, just standing upright required being fully engaged. I was pretty beat up by the end, but absolutely worth it.

MG: Tell us about working with Dante Tomaselli on his latest film “Torture Chamber”?together
JB: Working with Dante for me is a totally free process in that I just read the script, respond musically and send it off to him.I haven’t seen a single scene; only some stills. He makes music himself, and works with a couple of other composers, then edits it all into a ‘soup’. I do look forward to seeing the film though.

MG: You are currently working on “11-11-11” with Darren Lynn Bousman, tell us the sound that you are creating for this score?
JB: “11-11-11” was written for flute, clarinet, cello and a chorus of voices. Worked with writing and translating Sumerian chants… there’s darkness and devils within.

MG: How are you planning to top your score for “Insidious”, which set the bar high?
JB: Thank you again, I don’t really see it in terms of topping things. I see each world of every project as a different sounding place – they all, even in subtle ways feel different to me.

MG: You also worked with him on “Repo! The Genetic Opera”, tell us about that experience?
JB: “Repo” was dense, a ton of music to keep track of through various stages. Projects like that really don’t come around often, so out of the box as to be completely polarizing… love it or hate it, it’s different. Just to get to work with that many great musicians was such a reward in itself.

MG: How was it getting to work with master horror director and composer, John Carpenter on “Ghosts of Mars” & “Masters of Horror: Pro-Life”?
JB: John is awesome. I was very excited to just get to meet him, but yeah… got a call to come by the studio and a couple of days later was working away. He seemed to be enjoying the process at that point, to be able to sit back and just listen to and make music… very relaxed in the studio. On “Pro-Life”, he asked me to mix his son Cody’s score… again, very relaxed and enjoyable. One of our cooler filmmakers for sure… no bullshit is a great understatement.

MG: Your work is primarily in the horror genre, is that where you feel the most comfortable?
JB: Yes, I’ve always loved the genre, and it seems a good fit for what sounds most natural to me. Certainly darker genre are the films I’m most interested in as a viewer.

MG: After “11-11-11”, what are you planning on working on next?
JB: Have a handful of projects in different stages, not sure which happen next.