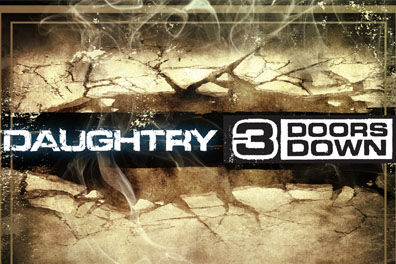 The co-headlining tour of Daughtry and 3 Doors Down made their way to the quaint Veterans Arena located in upstate Binghamton NY, on Saturday, December 1st where they performed to a near capacity crowd. Those in attendance were treated to hit after hit as both acts put on a stellar show that had something for everyone.

Kicking of the night was the hard rock act Otherwise. Vocalist Adrian Patrick and company provided a high energy performance which did a great job setting the stage for what was to come later in the evening. The band performed songs off their latest album titled “True Love Never Dies” with songs such as “Soldiers” and “I Don’t Apologize” garnering the biggest applause. 3 Doors Down were up next and proceeded to take things up a notch by blasting out hit after hit. The band performed several new tracks such as “There’s a Life” and “One Light” which are both contained on the bands recently released greatest hits album. The set also featured a dual drum solo between vocalist Brad Arnold and Greg Upchurch during the performance of “Citizen/Soldier”. “American Idol” season 5 finalist Chris Daughtry closed out the night and had fans on their feet from the opening notes. Fans were treated to songs off Daughtry’s latest album “Break the Spell” as well as fan favorites such as “Feels Like Tonight” and “Over You” during which Chris brought one lucky fan on stage to sing with him. Other notable performances during the set were a great a duet between Chris and Brad Arnold from 3 Doors Down on the song “Tennessee Line” as well as a solid interlude performance of Pink Floyd’s classic “In the Flesh”.

The night was packed full of hits which kept the crowd’s attention and energy going throughout the night. Not only were fans treated to great sounding performances but they were all visually appealing as well. The lineup of Daughtry and 3 Doors Down offers the perfect blend of emotion and sound that transcends perfectly to audiences of all ages. Definitely get your tickets for this tour as there are still a few remaining dates left on this run.